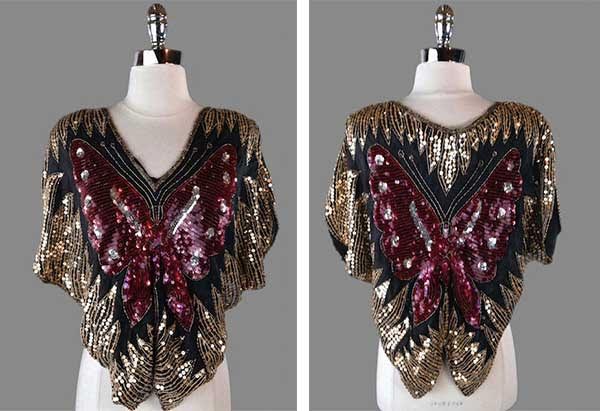 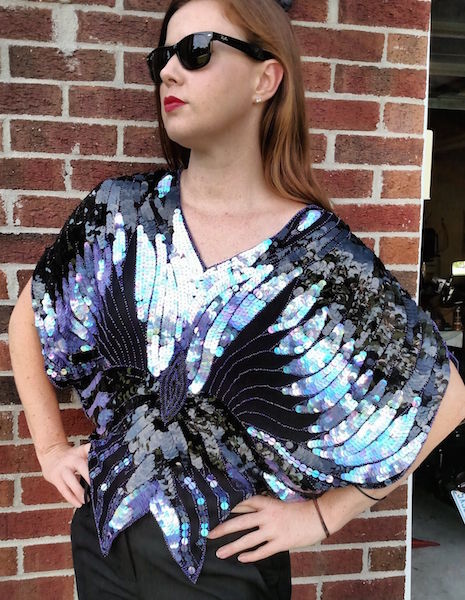 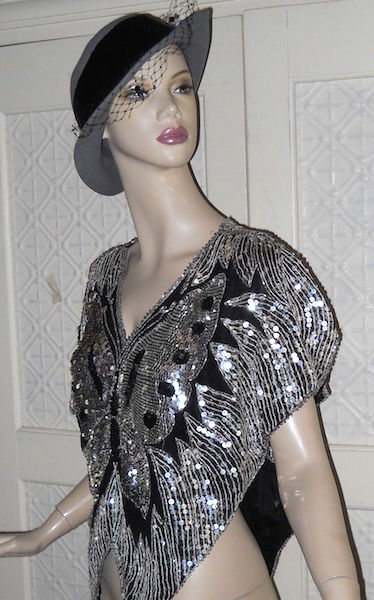 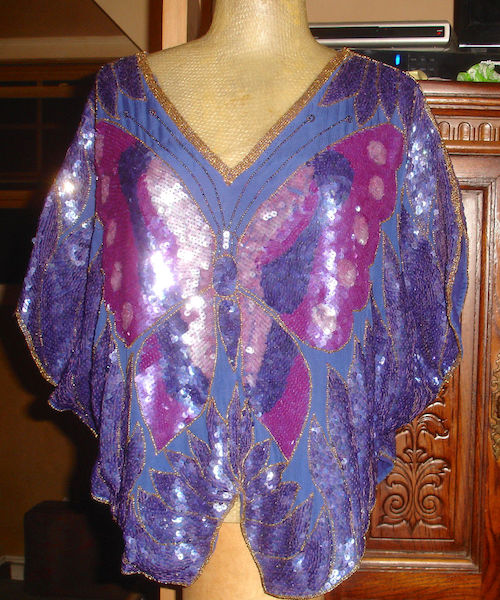 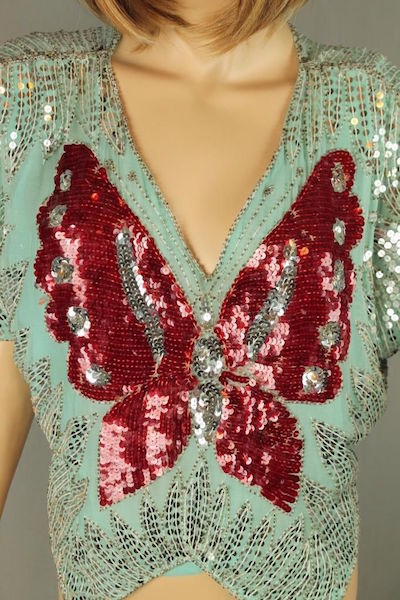 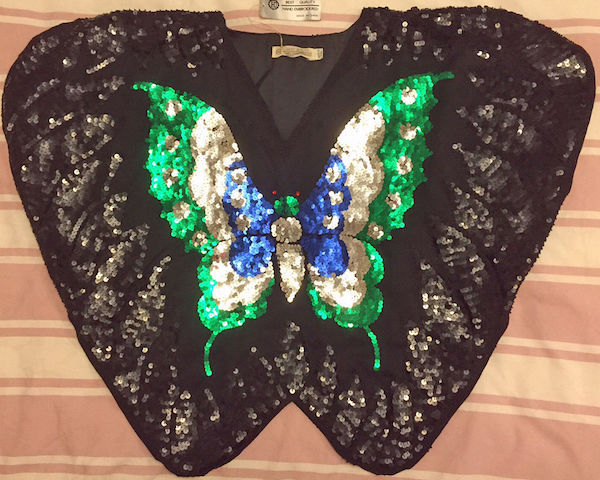 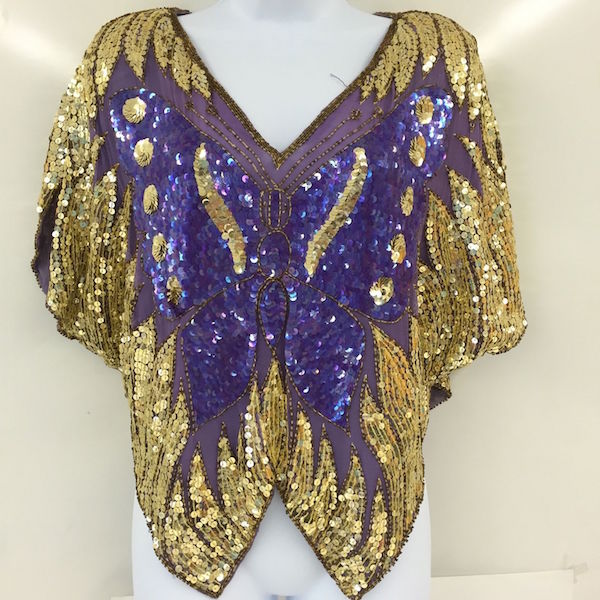 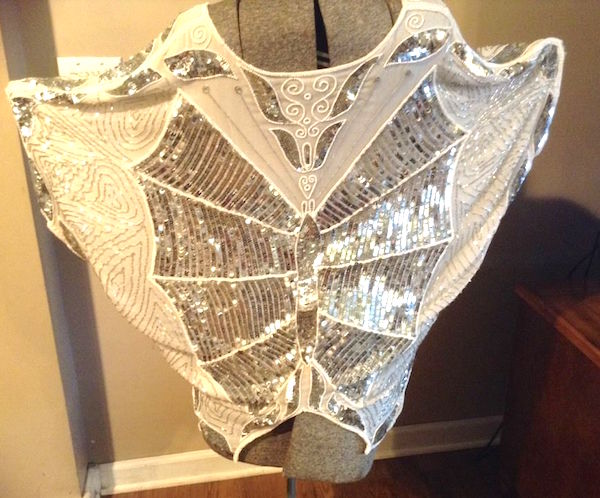 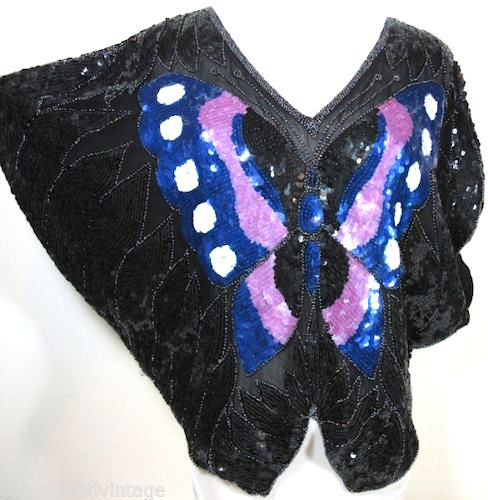 In the last days of disco, everyone wanted to be that one-of-a-kind butterfly—particularly after Bionic Boogie’s 1978 mellow-disco tune “Hot Butterfly,” written by Gregg Diamond and sung by Luther Vandross, hit the clubs. Two years later, Chaka Khan covered the song, retitling it “Papillon,” the French word for butterfly.

“The two-sided sequined butterfly pattern let everyone at the club see you shine—whether you were shimmying toward him or fluttering away.”

The 1970s disco crowd embraced the ethnic fashions of 1960s—such as brightly printed Indian silks, loose-fitting Mid-Eastern inspired caftans, African dashikis, and elaborate embroidery from Asia and Latin America. But the dancing queens updated hippie boho-chic looks with sequins and stretchy gold and silver fabrics. Club silhouettes alternated between show-it-off skintight and seductively loose and flowing—and between natural materials, like silk and cotton, and artificial, like Spandex and polyester. Whatever you wore, it had to keep you cool, flaunt your figure, and flash under the disco ball while you writhed on the Studio 54 dance floor. In fact, if you wore enough sequins, you became something of a human disco ball yourself.

By the early ’80s, the brassy, over-the-top glamour of the nightclub became a way of life. Big hair, bright makeup, bold jewelry, and sequined dresses and “trophy tops” were adopted by the elite, who wanted to emulate early Hollywood starlets and the saucy socialites depicted on “Dallas” and “Dynasty.” U.S. designers went gaga for sequins when they realized that hand-beaded designs—created using an ancient technique known as “tambour”—could be churned out cheaply in India. As sequined getups were becoming all the rage in the 1980s, so were deep and wide “dolman” or “batwing” sleeves, a style that originated in Turkey and other parts of the Mid-East in the Middle Ages. 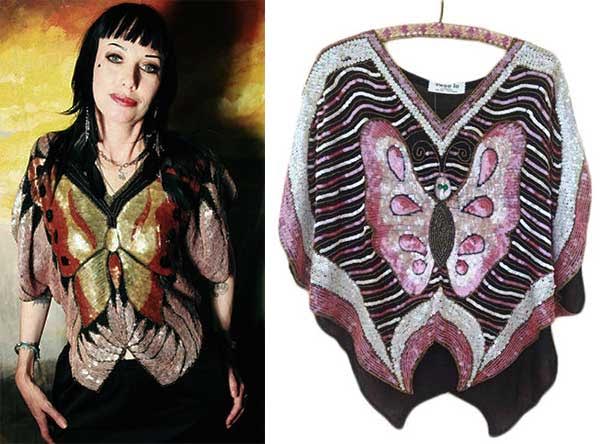 For those disco butterflies still shimmying the night away, dolman sleeves and sequin-mania came together in the 1980s for one flashy blouse design. These silk tops, which usually featured a sequined butterfly design on the front and the back, were also cut into the shape of a butterfly, the short batwing sleeves becoming “butterfly wings” and the W-shaped hem brushing the waist. Many of the labels simply say “100% Silk, Made in India.” Others have brand names like Valachi Creations, Mandans, Maharaj, and India Cottage; others reference fashionable Parisian locales like St. Honoré and Champs Élysées; and some versions had rayon linings. The two-sided pattern let everyone at the club see you shine—whether you were shimmying toward him or fluttering away.

“If you wore enough sequins, you became something of a human disco ball yourself.”

Some of the most beautiful butterfly sequin tops were produced by Swee Lo International. Malaysian-born New York City fashion designer and couturier Madame Swee Lo first made a name for herself in the 1960s designing hoity-toity looks for Mrs. Howell on “Gilligan’s Island.” In her boutiques in New York City and Palm Beach, Florida, she specialized in delicate fabrics from India and China, “exotic” accessories, and of course, sequined evening gowns. In 1981, she officially incorporated her clothing company, selling her designs in upscale boutiques and high-end department stores like Neiman Marcus, Saks Fifth Avenue, Bergdorf Goodman, and Bonwit Teller. Her butterfly tops often employed stunning color gradients in the sequin patterns and could run you $180, big money in 1980s dollars.

Today, you can pick up your own unique butterfly top for a third of that price on eBay and Etsy. Which is a good thing, because, once again, batwing sleeves are ubiquitous. Recently, Free People produced a modern take on the butterfly sequin top, albeit more belly-exposing and less sequin-heavy. To wear the real deal, you can take inspiration from Romanian fashion blogger and designer Gabriela Atanasov, who modernized one of these billowing, glittery blouses at spring 2013 Paris Fashion Week by tucking it into a sleek, yellow pencil skirt. Who couldn’t use a little more disco-ball “Hot Butterfly” sparkle in their humdrum lives? 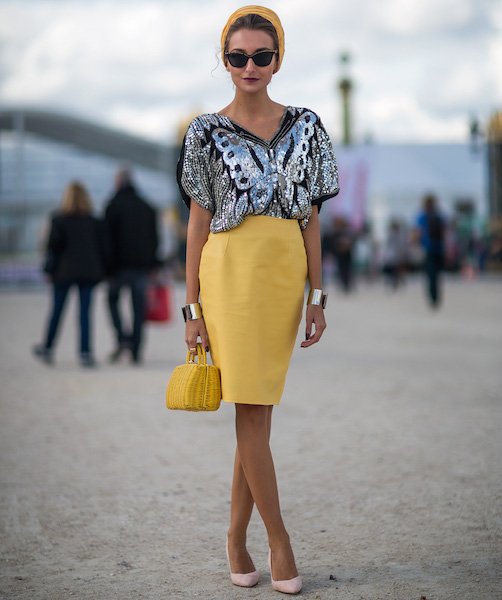 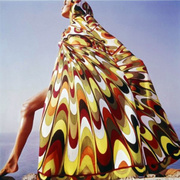