You know Eisenberg costume jewelry—just close your eyes, and picture a “vintage brooch.” In the 1930s and ’40s, Eisenberg established the iconic look of this classic piece: Large diamond-like Swarovski crystals set in regal, Baroque and Rococo settings. It was eye-catching jewelry that was at once ostentatious and refined. 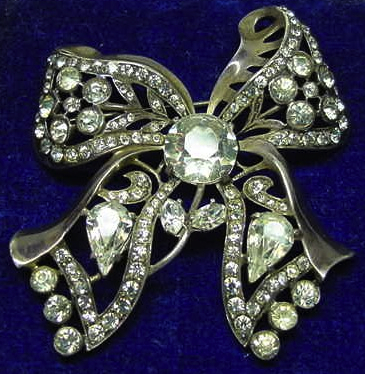 A rhinestone bow brooch, circa 1940s.

Eisenberg & Sons started out as a high-end clothing line in 1914, and it wasn’t long before founder Jonas Eisenberg came up with the brilliant idea of incorporating Swarovski crystals into his company’s dresses. Then, in the ’30s, his sons launched Eisenberg Ice, a line of rhinestone costume jewelry. Today, the clothes are long gone but the jewelry line is thriving, especially its hugely popular colored-gem Christmas tree pins. But it’s those diamante pins and earrings from the ’30s and ’40s, particularly the ribbon brooches, that drive collectors wild—so much so that fakes were manufactured in the ’80s and ’90s and sold as originals.

In the 1960s, Karl Eisenberg, president of Eisenberg Ice, took over the company from his father, Sam, who took it over from his father, Jonas. Recently, Karl kindly spoke to Collectors Weekly about his company’s storied history. Here, then, are the nine things you should know about Eisenberg, according to Eisenberg.

1. The Eisenberg jewelry line was born out of a need to thwart thieves.

“It was probably in the early ’20s when the Swarovski crystals were first put on the clothing, around the time before the Depression years. If you watch ‘Boardwalk Empire,’ you’ll see how people at that time would dress up—they wore a lot of rhinestones. When we put them on the dresses, we knew we had something. We had pins made; they were outsourced and then would be put on our clothes.

“Our biggest competitor was Albert Weiss. He used to knock us off all the time.”

“At that time, in the North Room of the Carson Pirie Scott department store, which was THE room in Chicago, people were coming in to try on our clothes. They’d leave the dress and steal the pin.

My grandfather called up the chairman of Carson’s, who told him, ‘You know what, if they like it that much, why don’t you develop a costume jewelry line?’ So we did, and my father got the brilliant idea of calling it Eisenberg Ice.

2. Yes, the name was inspired by gangsters.

“My father, Sam Eisenberg, really started the jewelry business, between ’30 and ’35. It was my father who thought up the name Eisenberg Ice. You know where the name came from? During the time of Al Capone and the mob, during the ’20s, diamonds were called ‘ice.’ That was why, starting in 1935, we put that moniker on the costume jewelry, and it worked. When we did that, the jewelry took off. The name really became something. It amazes me that even today there are people that collect it.”

3. Eisenberg Ice was a big hit in Hollywood. 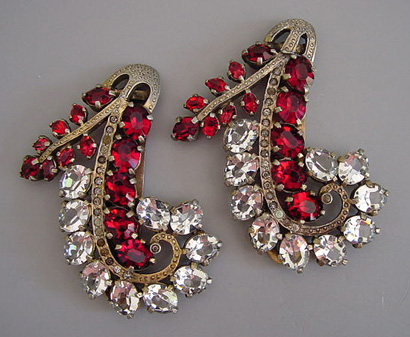 A matched set of dress clips, such as this one from about 1940, is difficult to find.

“In 1949, I remember I went out to Los Angeles for the Rose Bowl game, the one where Northwestern beat California. A designer took me to a major studio. They had a whole collection of Eisenberg that they used in the movies. You saw a lot of Eisenberg Ice in the movies.

“In fact, when I was out there not too long ago, when Northwestern played the Rose Bowl against Southern Cal, it was the same thing. The studio had a store room of costumes and props, and large collections of Eisenberg Ice and Eisenberg Originals.

“Lana Turner had the largest collection of Eisenberg. Carol Channing, too. When she did ‘Diamonds are a Girl’s Best Friend’ while playing the Empire Room of the Palmer House in Chicago, she would always come in and see me. We shared the same birthday, January 31. She would give away rhinestone bracelets to the audience—they were Eisenberg Ice pieces.”

4. Karl Eisenberg was more concerned with impostors than competitors. 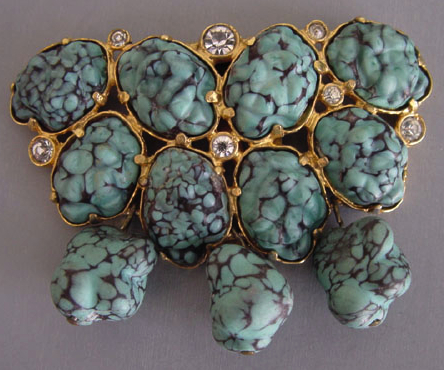 “I knew everybody. We were good friends with Trifari; they were never really competitors. Most of the stores that had Trifari had Eisenberg. Same story with Monet. At Christmastime, they would make a few little pins and they put tiny, dressy stones in their gold merchandise. But I would never say that they were really a competitor. No customer ever went in and said ‘I think I’ll get Trifari instead of Eisenberg,’ or ‘Eisenberg instead of Trifari.’

“Few copied our merchandise because of the size of the stones. It’s difficult to copy Eisenberg because it has a certain look. Even today, I can walk into a place in Indiana, Kentucky, New York, or anywhere and I can recognize a piece as Eisenberg. My wife says, ‘How do you know that?’ I just know the look. And I’ll pick it up and sure enough it’ll have Eisenberg Ice or Eisenberg Originals on it.

“We faced competition from Ciner and Kramer, but they had different looks. Our biggest competitor was Albert Weiss. He used to knock us off all the time. And when I complained to my father when I first went into the business in the ’50s, he said, ‘Listen, son, don’t worry about that. That’s the greatest compliment in the world. If you’re not doing well, nobody’s going to try to copy you.’ So we just let it lie. Weiss did very well. His boys took over the business, then they went out of business. They were a level below us as far as price was concerned, but they made nice jewelry.”

5. During Eisenberg’s heyday, the company only had one designer. 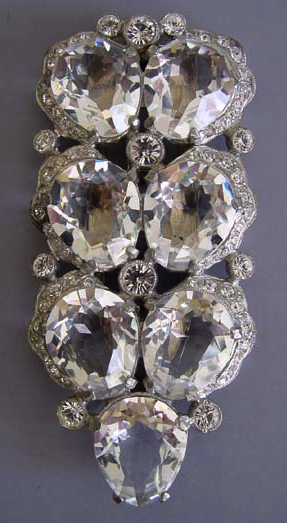 “Ruth Kamke designed most of our merchandise from the time she was 16 until the early ’70s. Then we used a design staff from the ’70s on, and now there are about seven or eight people that help in the designing of Eisenberg. But in those days, it was always one person, that’s why it always had that same look. We had a very identifiable look. There were people who were copying Trifari and Monet. But as far as Eisenberg was concerned, you just looked at the piece and you know where it was coming from.

“Well, Kamke designed the jewelry, but it had to be approved by somebody else. We had another woman, Florence Silverman, who had a lot to do with the production. She would look at the jewelry, and if she went, ‘Okay,’ they’d bring it to my father, and then to me. Anything that I approved got into the line after I went into the business in 1951.

“For instance, there was a man who used to have a well-known jewelry store in the Trump Tower. He had Kamke’s gold and rhinestone ballerina on display. She also designed a woman with a little broom. Those two pieces have sold for over $2,000. The ballerina was probably the most valuable piece because it was unlike anything we had done before. It was beautiful. It had gold and colored stones in it, just fabulous. Some of the things that were not standard-looking Eisenberg pieces are highly valued because there’s such a scarcity.”

“In the beginning, we used base metal, and we plated it with rhodium, which almost never tarnished. During the war years between 1940 and 1945, because so much lead was being used for bullets by the government, those pieces were done in sterling silver. Now, those are the most valuable pieces for collectors, the sterling pieces from the ’40s, because we never did that again. 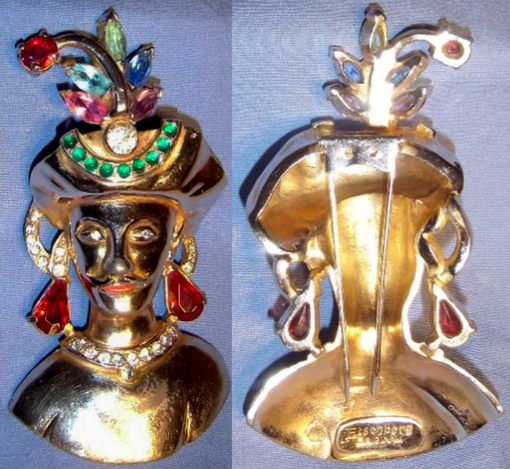 Pronged figural clips marked “Eisenberg Original” were made from 1935 to 1945.

“Those were all stamped with the Eisenberg mark. They’d also have a little marking on the clip that said ‘sterling.’ Sometimes the people that try to copy our merchandise forget to put it on them, and I know it’s a fake.

“During the wartime, we also had 10-karat gold-plated pieces made in Mexico. Some had turquoise; others had jade. They were beautiful pieces. It was very difficult during the war years to get anything to work with, but you could sell anything you made because those were boom times.

“We didn’t branch out into other things until the ’70s when you couldn’t sell as many big stones. We did enamels, we did beads, and we made smaller-looking pieces. We made the whisper chain, a very thin chain that had stones hanging on it. They were beautiful, 15-, 24-inch chains. We did a huge, huge business in those whisper chains—everything wasn’t big pins. We got into Christmas pins big time in the ’70s. The Christmas business remains big.”

7. Eisenberg came up with the idea of pieces inspired by works of art.

“In the ’70s, we did an Artist Series on famous painters like Braque, Picasso, Monet, and Calder. There were necklaces and earrings, and they were very carefully done. They went through the oven many times. They were absolutely magnificent pieces, and they were on 23-karat gold-plate chains. Jim Thompson, the only three-term governor Illinois ever had, is one of the biggest collector of these enamel pieces.”

8. Families pass Eisenberg pieces down, from generation to generation.

“I remember once years ago—this must’ve been 25, 30 years ago—I was in Lord & Taylor and I saw a young girl with her mother talking. I heard her mother say to her, ‘If you’re getting rhinestone, you’ve got to get Eisenberg Ice,’ which made me feel good. We always used very good plating so that jewelry didn’t tarnish, and the stones were normally dentelle stones, which refracted a lot of light. If you had a piece like that, you kept it.

“And what they did was pass it down from generation to generation. I think that’s still going on. We made a group of pins not too long ago. They were big, gorgeous pins that were made the same way we used to make them. You’ll probably see those on the Internet somewhere. They sold for $150-$250 each.”

9. Eisenberg pieces can be dated by their mark—most of the time. 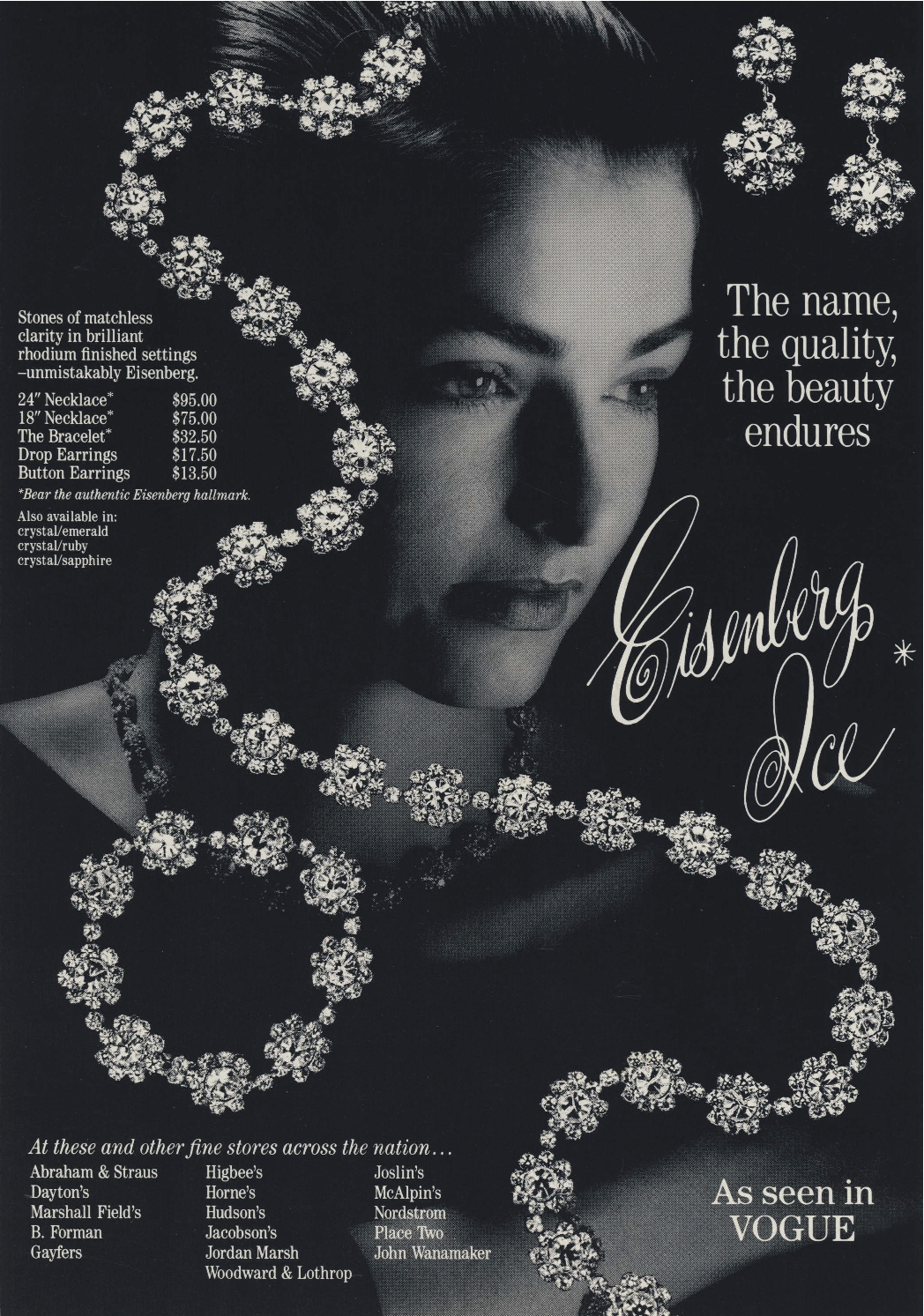 Magazine ads in the 1950s hyped the elegance of Eisenberg Ice.

“Anything that anybody’s collecting has the name stamped on it. They’re marked or they aren’t ours, except in a couple of instances. Sometimes I’ve seen things that I know were Eisenberg, but they were pieces that didn’t make it through the line, so they weren’t stamped. For some reason or other, though, those pieces got out. They were our pieces, but it’s just impossible to prove.

“A piece has no collector’s value unless it’s got our name stamped on it, or on a little tab that’s attached to a piece like a bracelet or necklace. The pins are by far are the most valuable items on the market, but if it’s not stamped, it’s not ours. There have been people that we know are counterfeiting our merchandise, so you have to be very careful, especially in California.

“People will call me and say, ‘My grandmother had this,’ and I say, ‘Well, where did it come from? What’s the provenance?’ And they tell me that they lived in Indianapolis, Indiana, or in Birmingham, Alabama, or Seattle, Washington. I can tell by the towns. Even little towns in Illinois, I knew they were telling me the truth because these were towns where we sold. Most of those small stores in America are not in business anymore, due to the consolidation of large chains.” 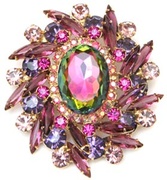 To Restore or Not to Restore? A Look at Vintage Rhinestone JewelryHow Miriam Haskell Costume Jewelry Bucked Trends and Won Over Hollywood

Eisenberg JewelryKnown for its use of Swarovski crystals and colored stones, as well as supe…