This article describes Rookwood’s origins, also noting the company’s firing process and characteristic designs. It originally appeared in the July 1943 issue of American Collector magazine, a publication which ran from 1933-1948 and served antique collectors and dealers.

The Rookwood Pottery has gone to war. This pioneer among American art potteries, founded by Maria Longworth Storer of Cincinnati, Ohio, in the last quarter of the 19th Century, has turned over that part of its factory where fine tiles were made for the manufacture of wooden blocks which fit into sections, making water conduits. The government is in need of these at the present time, especially for Army camps, as the metal and cement ordinarily used for such purposes is at a premium. 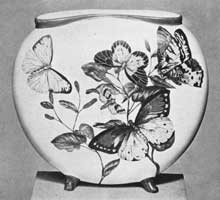 Illustration I: Rookwood Vase Dated 1882: Butterflies are the motif of this hand-painted piece. It is of the period when the fashion in Cincinnati was to decorate individual pieces made at the pottery.

When I heard about this, I called on John Dee Wareham who has been president and art director of the company for many years and was deeply impressed by the way art has merged with war. For while the pottery turns out its quota of water conduit blocks, the making of its artistic and beautiful wares still goes on.

But back to the days when peace and civilized behavior were taken for granted; back to 1880. Maria Longworth Storer had begun some years before with the lady-like art of china painting. Soon she became interested in making experiments in pottery glaze and gained permission to have pieces of her making fired at the Dallas Pottery in Cincinnati. This, however, had not proved satisfactory since the granite ware kilns destroyed nearly every color. So in the spring of 1880, her father, Joseph Longworth, said, “If you are really in earnest in wanting to have a pottery of your own, you may take an old school house that I bought at a sheriff’s sale last week and fit it up to suit yourself.” 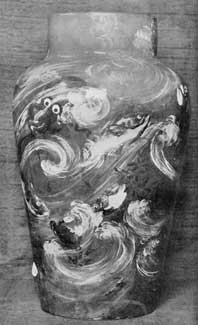 Illustration II: Another Early Rookwood Vase: Signed by the maker, Valentine, and bearing the date 1883, it is typical of the experimental stage of this pattern. The artist who made it later became one of the finest artists who worked at Rookwood.

Thus the Rookwood Pottery, named from Mr. Longworth’s country estate, came into existence. Years of trial and error in pottery making followed. It is said that the first pieces drawn from the kiln had the complexion of the puny and undernourished. The vase with hand painted design shown here (Illustration I) was made in 1882 and is an example of the work done when it was the vogue among the elite of Cincinnati to decorate pieces made and fired at the pottery. Though the difficulties were too great to tempt these women for long, they formed the first women’s pottery club in America and at the same time created a civic interest in the Rookwood Pottery.

Another vase of these early years is signed and dated, “Valentine, 1883.” (Illustration II). The decoration is typical of the experimental stage, but Valentine progressed and finally became one of the finest artists ever employed by Rookwood. Meanwhile the search for improvements and effects went on at considerable cost and it was nine years before this pottery became a paying industry. But at the Paris Exposition of 1889 a gold medal was presented to Rookwood Pottery and this public recognition of excellence went a long way toward bringing financial success. 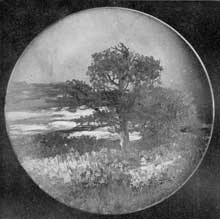 Illustration III: Plaque Decorated by Joseph Jefferson: In 1910 this famous American actor, who was also a painter of ability, spent a day at the pottery. A special studio was provided for him and he executed five or six similar pieces. All show much of the style and freedom of modern painting.

Two years later Mrs. Storer left Cincinnati for Washington, but before going, she presented the Rookwood Pottery to W. W. Taylor who had been manager for eight years. He in turn formed a stock company and in 1892 the present buildings were erected. The site is at the top of the Mt. Adams incline (one of the few in the country still in operation) and affords one of the most picturesque views of the city. The clays used are all native and for the most part, from the Ohio Valley. Incidentally, my Grandfather Jeffre, during the early years of the pottery, had the contract to supply the sand and fuel.

Through the years it has been the aim and desire of the guiding figures at Rookwood to avoid the rut of commercial production. Some utility pieces have been made, such as teapots, breakfast sets and the like, but there is only one design of table ware that has been produced in a complete set and carried in stock. The pieces are octagonal in shape with simple hand painted design under the glaze. 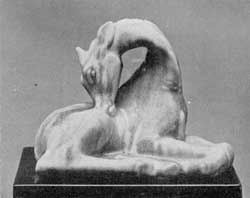 Illustration IV: Animal Sculpture in Pottery: Modeled by Louise Abel, this is characteristic of the work she is now doing at Rookwood.

The process of firing at Rookwood is costly, since there are two firings, one to form the body combined with the colors and one to envelop it with glaze. Also the decorating of the pieces requires extremely skillful handling. The method of plastic colored ornamentation in the clay state presents the maximum of artistic opportunity, and of risk. About seventy-five percent of the cost is in the vase of dry clay. In that state, when an incautious touch will crumble it to dust, it represents all the skill of all the staff. Two thousand degrees or more of heat are required for firing and whether or not the coloring will turn out as anticipated is always a question. Then, too, the piece may crack or some defect in body or workmanship may appear. Nor is the second firing without danger as it is then that any fault or failure in the long processes preceding it show up.

Back in 1910 the actor, Joseph Jefferson, had a pet ambition to decorate some pieces at Rookwood. So one day a studio was set up for him and he was allowed to go to work. In that one day he did five or six plaques like the one shown here (Illustration III). A Rookwood artist would have taken three or four days to do one in order to work out the detail of coloring suitable for firing, and, those done by Jefferson were considered crude. Today, however, they show much of the style and freedom of the modern painter. 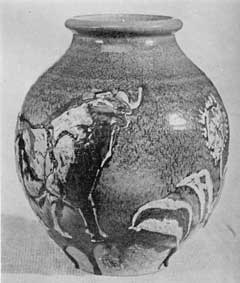 Illustration V: Vase with Drip Glaze: Made by John Dee Wareham, it has a rugged turquoise dry glaze applied to a terra cotta body. The design shows a bull and some trees. About 1915 Rookwood ceased to make many pieces of terra cotta body.

It was in 1915 that the oxblood, a glaze after the manner of the Chinese, was first put on to market and although improvements have been made, it is still being produced. Some of these pieces come out of the kiln so light in coloring as to resemble the Chinese peach blow.

The “tiger eye,” a crystalline glaze, was first produced in 1884 and for its fortieth anniversary Rookwood revived it in a new and more varied range of color. I saw many of these variations side by side and was amazed by the different depths of color and beauty. The most outstanding example of this glaze is the famous “Bird of Paradise” vase, (Illustration IV), valued at ten thousand dollars. It was made in 1888 by M. A. Daly and is particularly notable for the beautiful golden glint that appears under the glaze.

No printing patterns are used nor are there any duplicates made of signed decorated pieces. An atmosphere of liberality has been maintained and thus each artist has been encouraged to develop his own individuality. Nor is speed demanded. After all an artist is not a machine and to try to turn him into one would defeat the purpose for which this unique pottery strives. 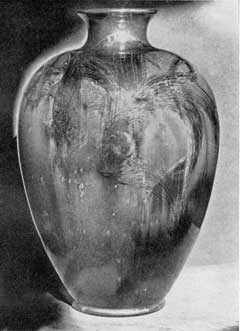 Illustration VI: A Tiger Eye Vase: The work of John Daly, it was made at Rookwood circa 1888. The crystalline "tiger eye" glaze was first produced at the pottery in 1884 and was revived in new and more varied colors to celebrate the fortieth anniversary of Rookwood. This piece is the most outstanding example of the use of this glaze ever made at the pottery.

One of the artists employed by Rookwood is Louise Abel who has done some lovely bits of sculpturing (Illustration IV). She told me of several interesting experiences at the Cincinnati Zoo where she has for some years been in the habit of sketching and modeling the animals. To her the latter are almost human, each with an individuality of its own. No two act or react alike. She has more than once sat for hours waiting for one of her subjects to get into a position suitable for modeling.

Among these was a polar bear who seemed to sense his importance and posed daily in the same spot. Miss Abel finished modeling him but a year later she returned and started setting up her modeling stand. Thereupon the same bear immediately assumed his pose. Maybe bears, like elephants, never forget.

The mat glazes were made at Rookwood in 1896 and instead of refracting light, admit a slight penetration. They can be used in large masses without disturbing the forms or color schemes as glassy reflections do. Here the artistic interest is in the glaze itself which is developed in the fire and not by acid or other after-treatment. It has a dully waxy semi-translucent texture.

The drip glaze is best illustrated by a vase made by Mr. Warham (Illustration V). It is of a rugged turquoise drip glaze over a terra cotta body. Very few pieces are made today in non-vitrious clay, for in 1915 Rookwood began to use a porcelain body. Like all live ventures this pottery is receptive to changing conditions but it never loses sight of two things, craftsmanship and artistic appreciation.

Rookwood Art PotteryFounded in 1880 by Maria Longworth Nichols, Rookwood pottery is a favorite …