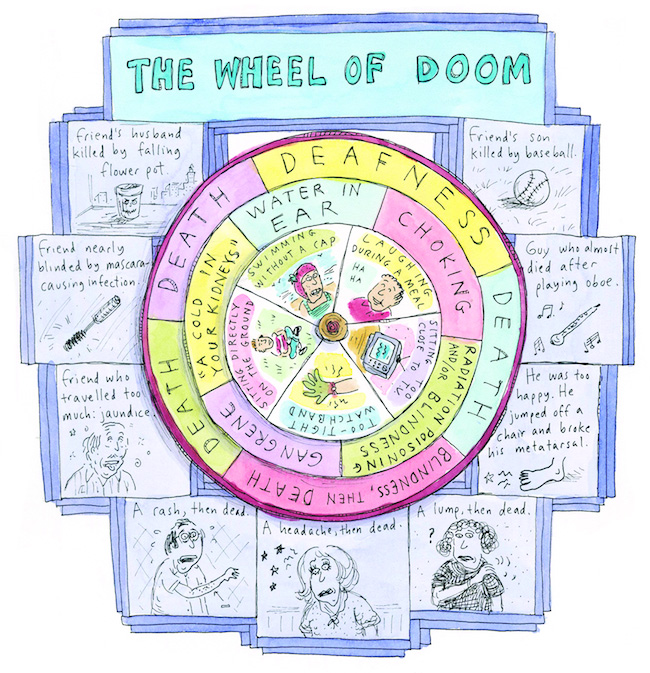 Right now, if Roz Chast were a cartoon character, smoke would be steaming out of her ears and lightning bolts would be shooting from her eyes. My bad: I‚Äôve just asked the author of Can‚Äôt We Talk About Something More Pleasant? an unpleasant question.

“I still have my stupid life and these stupid thoughts that go through my head.”

We‚Äôve been talking in a gallery at the Contemporary Jewish Museum in San Francisco, where 250 of Chast‚Äôs drawings and watercolors, from “New Yorker” cartoons to illustrations for books authored by the likes of Stephin Merritt, are on view through September 3, 2017, for “Roz Chast: Cartoon Memoirs.” After tossing her a few softballs‚ÄîWhen did you start to draw? When did you realize you were funny?‚ÄîI’d served up a curve. How, I had asked, do you manage to get through each day without drawing a cartoon about Donald Trump?

‚ÄúIt‚Äôs difficult not to do that every time my pen approaches the paper,‚Äù Chast replies, her mouth immediately contorting into one of her character‚Äôs trademark scowls. ‚ÄúHe’s such an asshole‚Äîsuch an asshole,‚Äù she repeats, almost spitting the words, as if to exorcise a demon that’s taken up unwanted residency in her spleen. ‚ÄúThe despicableness of that person trumps every feeling I‚Äôve ever had about a politician. His horrible voice, that stupid hair, the way he pushes his mouth out like that.‚Äù Chast purses her lips like a deranged baby duck. 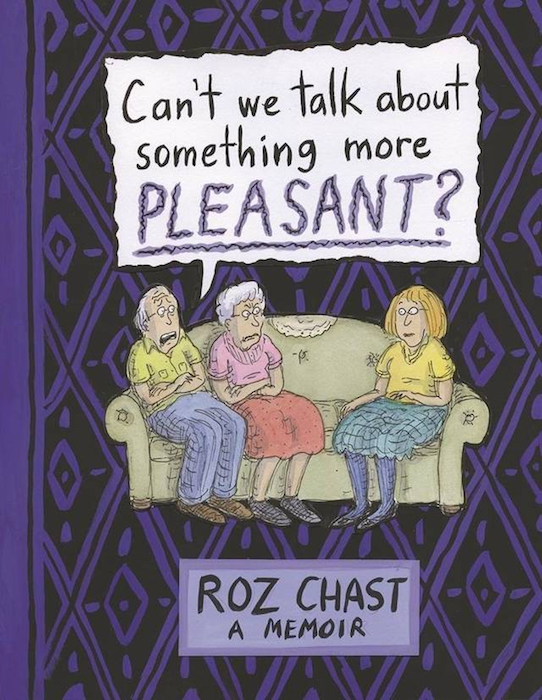 Top: “Wheel of Doom,” 2014. Illustration for Can‚Äôt We Talk About Something More Pleasant? by Roz Chast (Atheneum Books for Young Readers). Above: Cover illustration by Roz Chast. Both images ¬© Roz Chast. All rights reserved.

‚ÄúThe courtesy he shows his wife,‚Äù I offer, goading her on.

More lightning bolts. ‚ÄúOh, God, that’s so terrible. That picture of them getting off of the plane‚Äîit‚Äôs like she’s just a thing to him. I feel terrible for her.‚Äù Chast takes a deep breath.

I ask Chast if she‚Äôs been taking a lot of deep breaths lately.

‚ÄúYeah,‚Äù she says, ‚Äúbecause I don’t want to think about him that much.‚Äù Chast pauses briefly, shakes her head, and then asks, ‚ÄúDo you know he actually said that he got higher ratings than 9/11?‚Äù

‚ÄúWell,‚Äù I suggest, choosing the words that follow carefully, ‚Äúat least he was comparing apples to apples.‚Äù

And with that, the furrows in Chast‚Äôs brow clear, her frown transforms into a mischievous grin, and a conspiratorial chuckle sneaks out of the corner of her mouth. ‚ÄúYes, that’s true,‚Äù she says with a sly smile.

I‚Äôve just made Roz Chast laugh, and it feels like I‚Äôve won the Pulitzer Prize, albeit in a new, and very nichey, category‚ÄîBest Joke Told to a Writer’s Favorite Cartoonist. ‚ÄúBut my God,‚Äù she adds with a quick grimace, ‚Äúwhat an asshole.‚Äù And, we‚Äôre back. 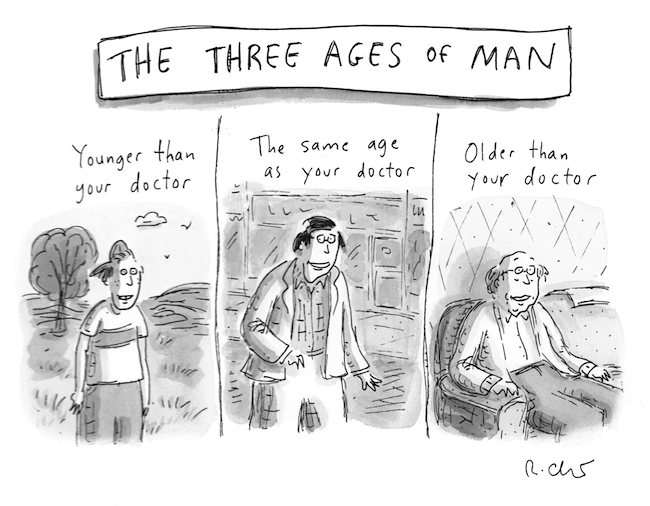 In Chast‚Äôs cartoons, humor routinely flows from dark and absurd sources. Trump, of course, is a heaping helping of both, but most of Chast’s subject matter lies closer to home. Since 1978, when the first of her 1,200-plus cartoons debuted in the ‚ÄúNew Yorker,‚Äù Chast has made a career out of chronicling the garden-variety anxieties, deeper-seated neuroses, and bald-face lies we all tell ourselves to make it through our imperfect days.

Chast‚Äôs cartoons revel in the inevitable disconnects that result from this well-honed self-deception, often pairing a flat, innocuous scene, or perhaps a few simple images, with words or phrases that instantly imbue her drawing with unexpected depth. For example, the boy, middle-age male, and old guy in a cartoon called ‚ÄúThe Three Ages of Man‚Äù go fine with their title, but when the words ‚ÄúYounger than your doctor,‚Äù ‚ÄúThe same age as your doctor,‚Äù and ‚ÄúOlder than your doctor‚Äù are added above each successive drawing, Chast‚Äôs cartoon is transformed into a funny, wickedly bleak, rumination on death. In one glance, we see our doom, from which there is no escape. We let out an involuntary laugh, followed by a groan, and then remember that we haven‚Äôt yet filled out that advanced-directives form our health provider sent us a couple of months ago. This, I would argue, is the perfect Roz Chast cartoon. 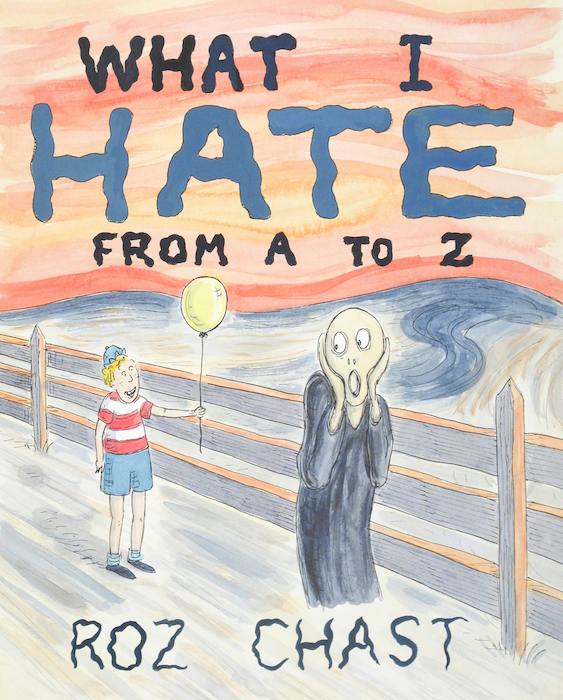 To be sure, Chast can do light and airy, as many of her children‚Äôs-book illustrations at the CJM demonstrate. Truth told, I skipped most of that (Chast‚Äôs adorable red bird, Marco, does nothing for me, but my kids are adults, so…), choosing instead to bask in the cynicism and paranoia of all 26 drawings, plus the cover art, created for her 2011 book What I Hate From A to Z, as well as the despair and trainwreck-inevitability depicted in the 139 drawings and watercolors that comprise Can‚Äôt We Talk About Something More Pleasant?, which chronicles the decline and death of her elderly parents.

Which actually brings us back to Trump and the definition of funny. When Chast was a little girl, admiring the work of her idol, Charles Addams, and drawing to amuse herself, funny was simple. ‚ÄúI remember being a kid and noticing that other little girls really loved to draw horses. I did not like to draw horses, I had no interest in horses, but I wanted to submit a drawing to ‘Highlights for Children’‚Äîmy schoolteacher parents had a subscription‚Äîwhich always published drawings¬Ýof horses that little girls would send in. So, one day, I filled up a sketchbook with some horses that I drew. I named all of them‚ÄîBrighty, Whitey, Blackie. They were terrible, but they were also so funny. I remember looking at them and laughing like a nut. It wasn’t like, ‚ÄòOh, I see, I’ll be a cartoonist,‚Äô but when you’re a kid and you can make yourself laugh by drawing something, that‚Äôs funny. Or, it could be that maybe the way I draw is just kind of funny.‚Äù 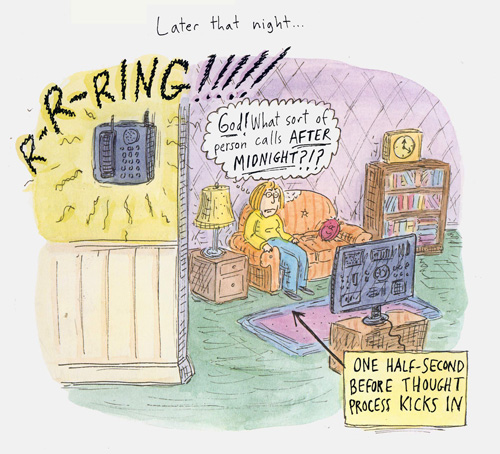 “Later That Night,” 2014. Illustration for Can‚Äôt We Talk About Something More Pleasant? (Atheneum Books for Young Readers). Image via the Norman Rockwell Museum. ¬© Roz Chast. All rights reserved.

Some things, then, strike us as funny, and if the world decides to laugh along, that‚Äôs fine, too, but not really essential. Other things, however, are never funny. For example, would Chast have published Can‚Äôt We Talk About Something More Pleasant? while her parents were still alive?

‚ÄúNo,‚Äù she says, without hesitation. ‚ÄúWhat’s not funny?‚Äù she asks, repeating my question. ‚ÄúWhen I get deeply into a worry, that’s not funny. In retrospect, it can be funny, but at the time, when I’m in it, it’s not funny.‚Äù

Timing, comedians tell us, is everything when it comes to funny. Consider the panel in Can‚Äôt We Talk About Something More Pleasant? in which a cartoon Chast is sitting on a cartoon couch in her cartoon home watching a cartoon TV. At this point in the book, Chast‚Äôs mother has had a fall, an event that almost always seems a sign that death is right around the corner. After an older person falls, any younger numbskull can see that things are only going to get worse, but as the cartoon wall phone rings loudly in Chast‚Äôs cartoon living room, her first thought is ‚ÄúGod! What sort of person calls AFTER MIDNIGHT?!?‚Äù A box in the bottom-right corner of the watercolor explains that this outburst has come ‚ÄúOne Half-Second Before Thought Process Kicks In.‚Äù

At the time, Chast, says, ‚Äúthat was not funny. In retrospect, yes, of course it is. I still remember letting the phone ring a couple of times before it dawned on me that ‚ÄòThis will not be good.‚Äô‚Äù The question posed by the cartoon, of course, is why wouldn’t it have dawned on Chast instantly that something else bad had happened to her poor mother? ‚ÄúExactly. The lag time makes it kind of funny.‚Äù 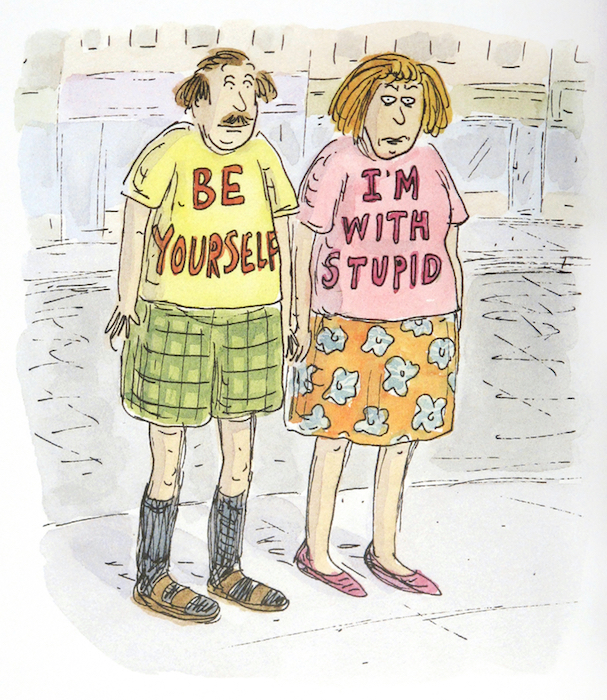 “Be Yourself, I‚Äôm with Stupid,” 2014. Illustration for 101 Two-Letter Words by Stephin Merritt. ¬© Roz Chast. All rights reserved.

With Trump, whose pre-dawn Tweets and official pronouncements are as relentless as the media coverage that inevitably follows, there is no lag time‚Äîno opportunity, say, to admire the cosmic irony of comparing one‚Äôs presidency with the worst terrorist attack on our soil in our nation‚Äôs history. Chast‚Äôs solution to coping with an unhinged leader in the age of media echo chambers? Why, more media, of course.

‚ÄúI watch Stephen Colbert,‚Äù she says. ‚ÄúI had stopped watching him when he started doing ‘The Late Show’ because I don’t care about some starlet‚Äôs new movie, or whatever. But I‚Äôve joined the chorus of people who say that he’s come into his own again with politics. That’s really his thing. To see him do his monologue and take apart Trump is pleasurable. It’s a relief.‚Äù

And then there‚Äôs the coping mechanism that has served her well since she was a little girl drawing ridiculous horses in her sketchbook. ‚ÄúI still have my stupid life and these stupid thoughts that go through my head,‚Äù she says, ‚Äúwhen a thing or a remark that has nothing to do with Trump will suddenly seem funny. At that moment, it’s like, ‚ÄòOkay, good. I can push that Cheeto out of my head.‚Äô‚Äù 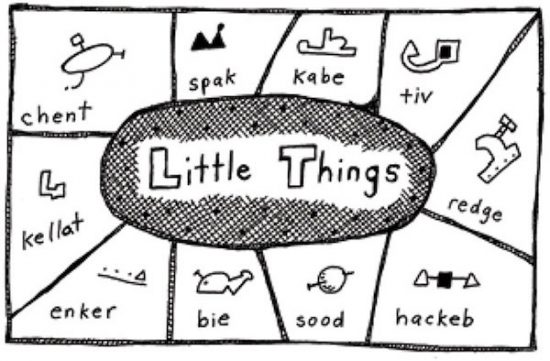 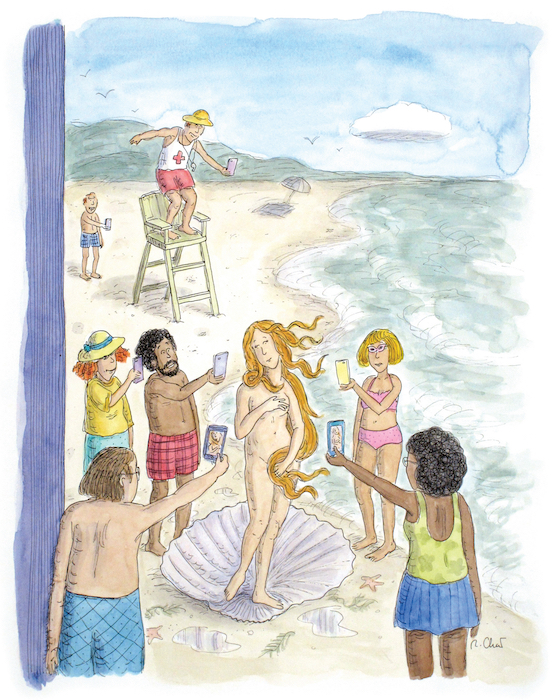 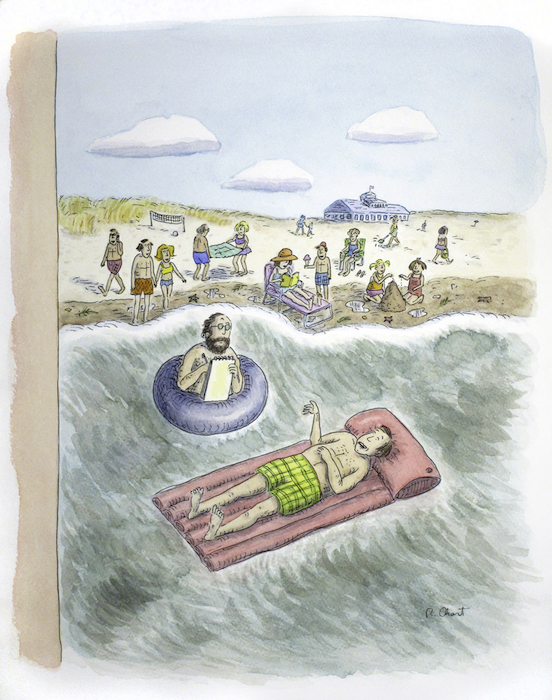 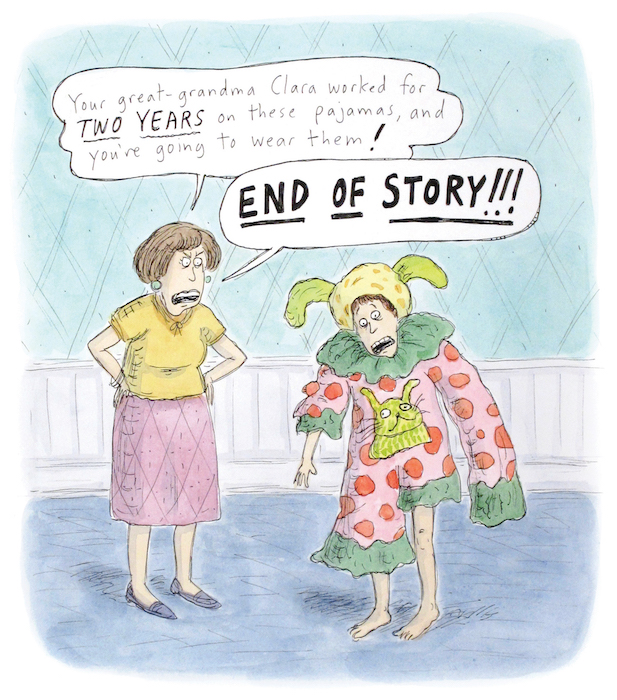 "From 9 to 10 Lynn can‚Äôt understand why someone would knit pajamas by hand," 2015. Illustration for Around the Clock by Roz Chast (Atheneum Books for Young Readers). ¬© Roz Chast. All rights reserved. 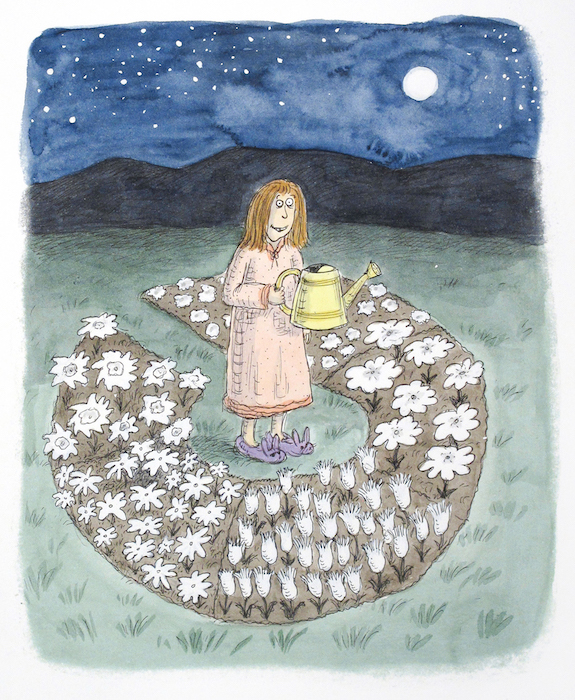 "From 4 to 5 You‚Äôll See June in a Garden," 2015. Illustration for Around the Clock by Roz Chast (Atheneum Books for Young Readers). ¬© Roz Chast. All rights reserved. 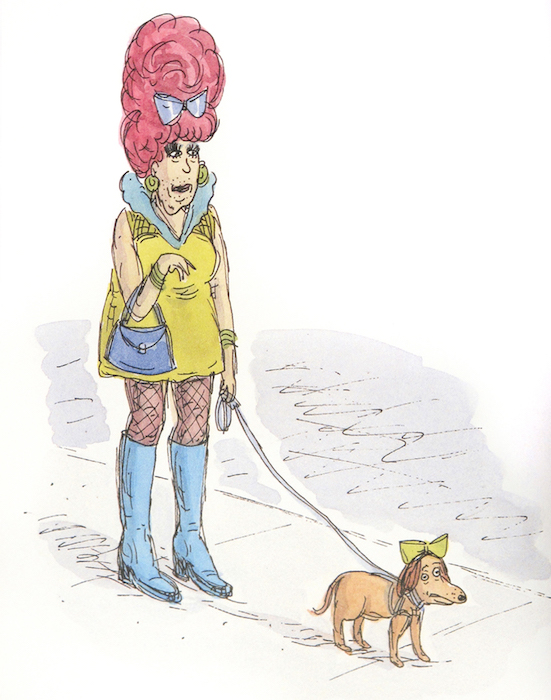 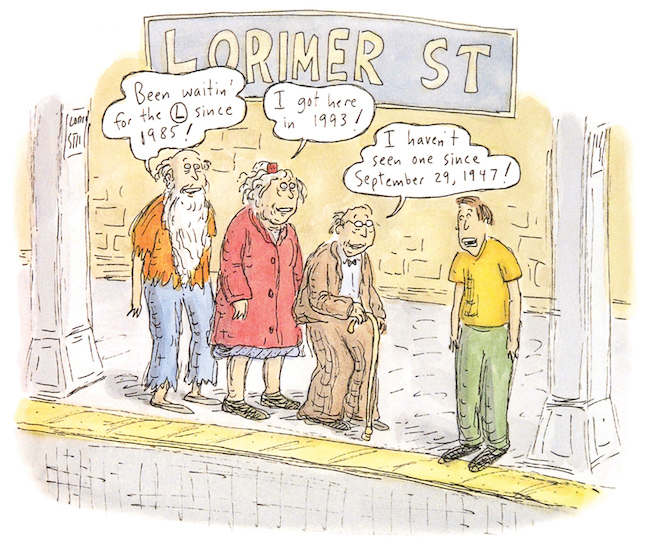 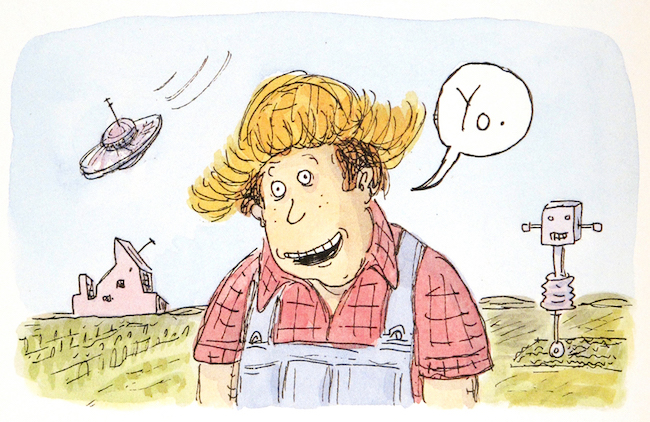 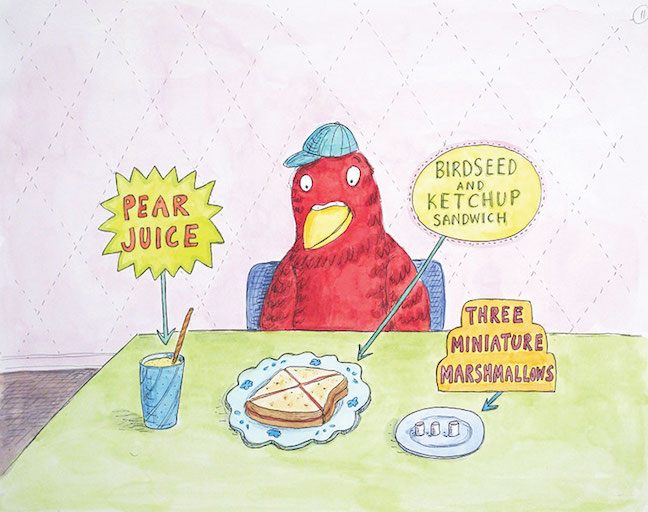 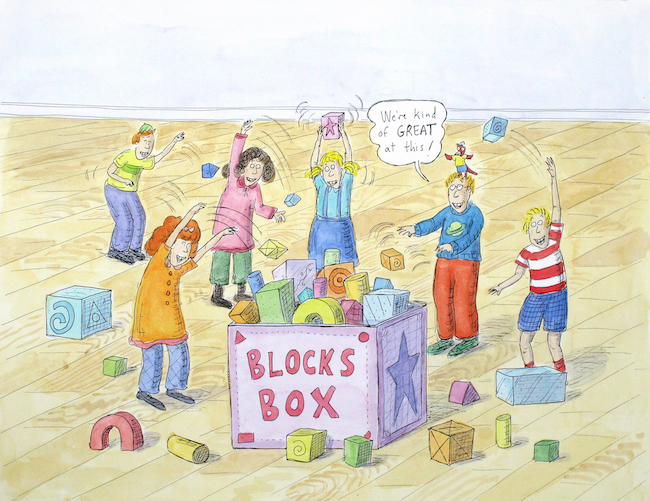 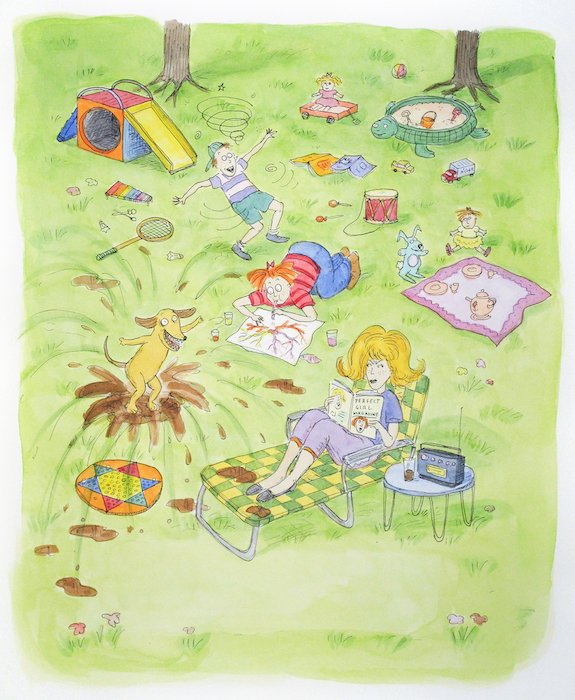 "Joy Never Has What I Call Fun," 1996. Illustration for Now I Will Never Leave the Dinner Table by Jane Read Martin and Patricia Marx. ¬© Roz Chast. All rights reserved. 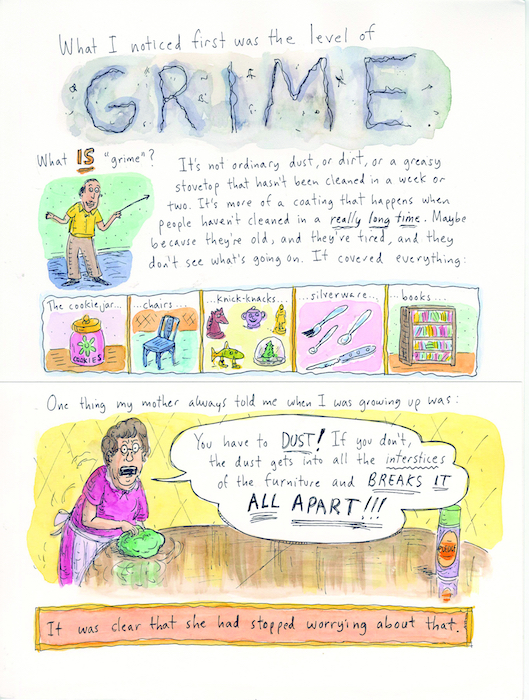 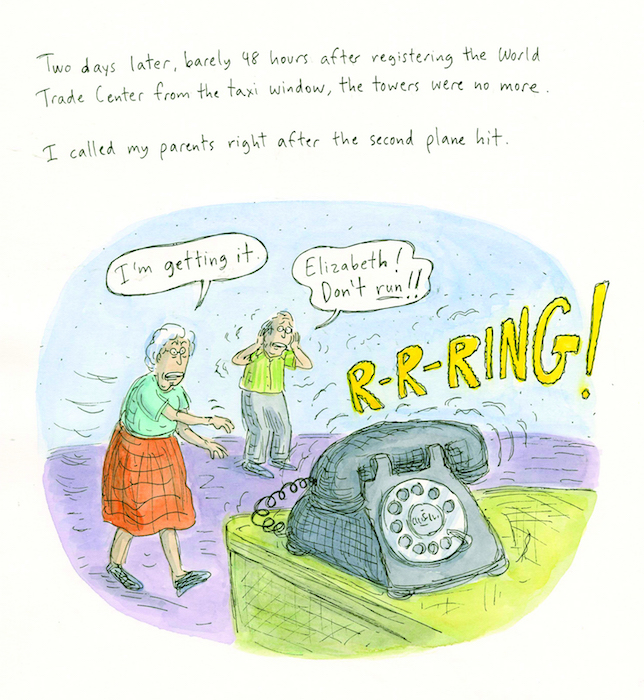 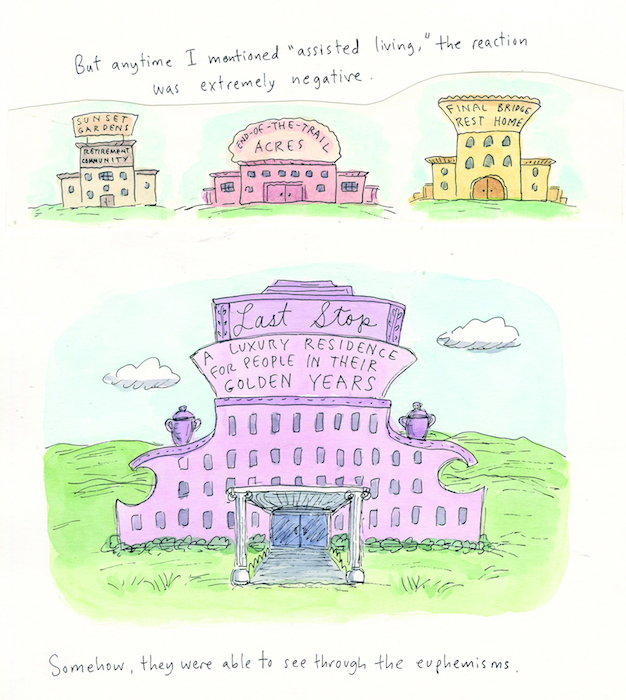 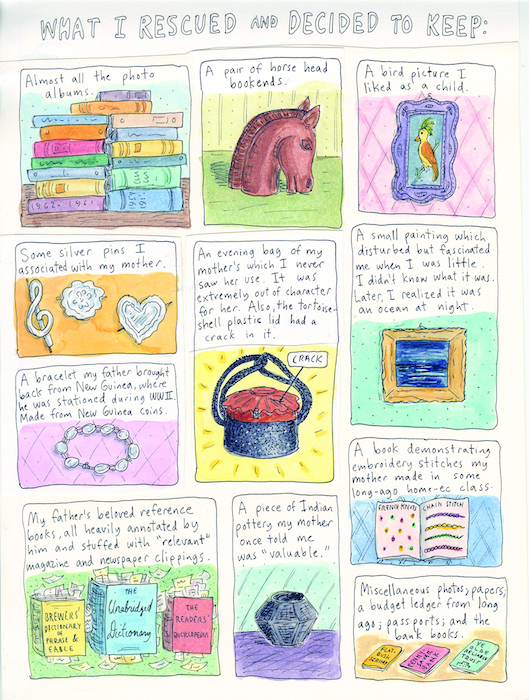 "What I Rescued," 2014. Illustration for Can‚Äôt We Talk About Something More Pleasant? by Roz Chast (Atheneum Books for Young Readers). ¬© Roz Chast. All rights reserved. 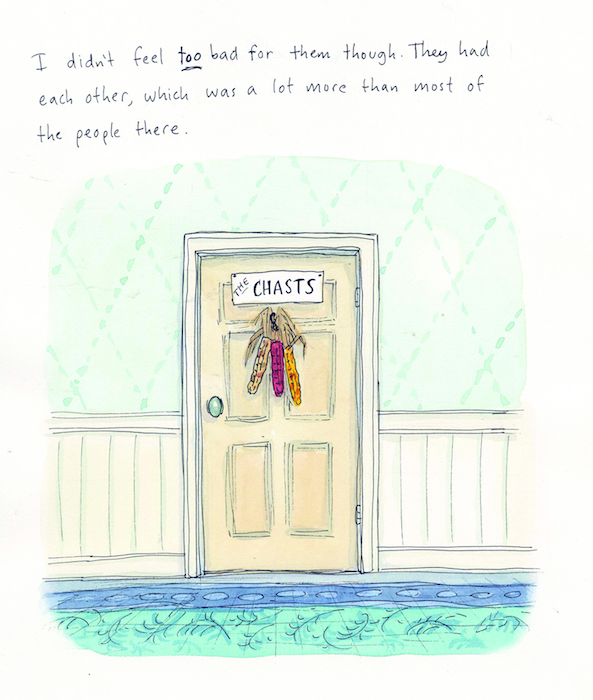 "They Had Each Other," 2014. Illustration for Can‚Äôt We Talk About Something More Pleasant? by Roz Chast (Atheneum Books for Young Readers). ¬© Roz Chast. All rights reserved. 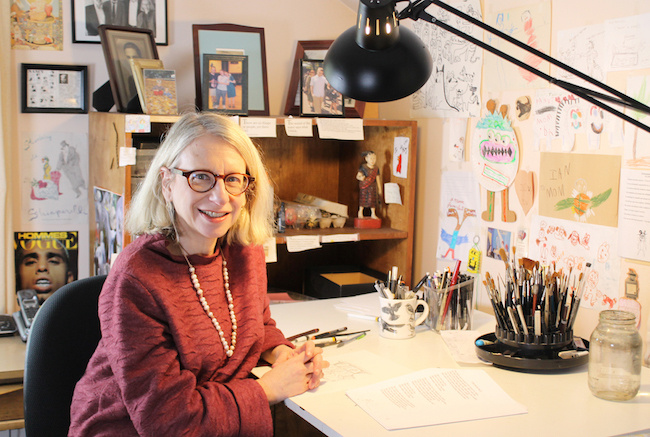 (All images via the Contemporary Jewish Museum, San Francisco, except as noted.)

Women Who Conquered the Comics World