Selling New Zealand: The Railroad Posters That Made a Nation Want To See Their World 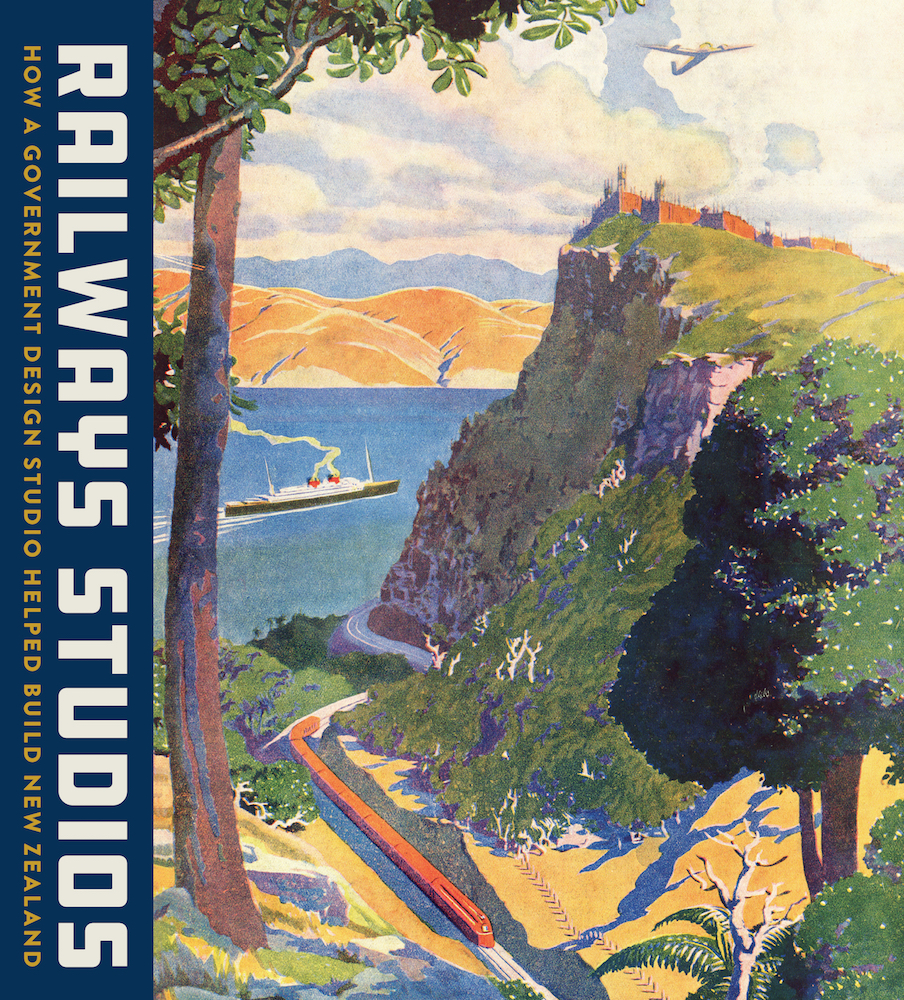 In the 21st century, we refer to someone who has grown up with computers, smartphones, and the internet as being “digital native.” Back in 1840, when representatives of Queen Victoria and more than 500 Māori leaders signed the Treaty of Waitangi, one of New Zealand’s founding documents, the pākehā from England who were settling in New Zealand might have been described as “railroad native.” After all, the landscape of their former island nation was beginning to be crisscrossed with railroad tracks, as entrepreneurs raced to reap the fortunes waiting to be made by pulling goods and passengers from town to town behind puffing steam locomotives. Naturally enough, settlers of this new island nation—roughly the same size as the one they’d abandoned—were hoping to replicate their homeland’s emerging transportation model in the South Pacific.

Author and art collector Peter Alsop describes what these would-be railroad tycoons were up against in his new book, Railways Studios: How a Government Design Studio Helped Build New Zealand. “The colony had a small and scattered population,” he writes, “clustered in coastal enclaves; a limited supply of capital and labour; a geography dominated by rugged mountains, dense forests, swift rivers and swampy lowlands; and, especially in the North Island, resolute Māori communities who were wary of settlers’ growing appetite for land.” 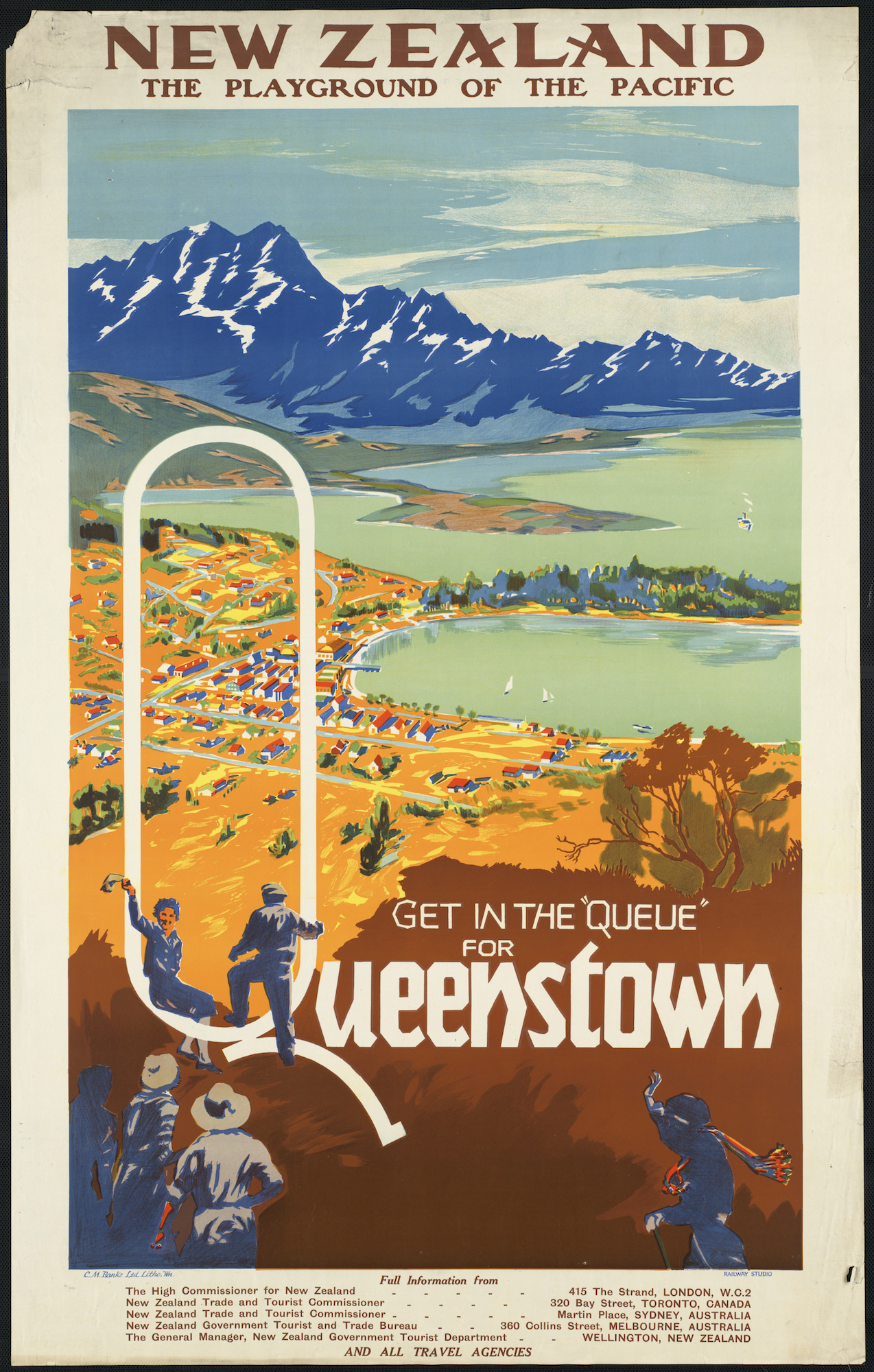 Little wonder, then, that New Zealand’s first steam-powered locomotive, the Pilgrim, ran on South Island between downtown Christchurch and the small port of Ferrymead only a few miles away; even this modest service did not begin until December 1863. Alsop touches on the growth of New Zealand railways that followed, but his book, written with Neill Atkinson, Katherine Milburn, and Richard Wolfe, is primarily devoted to the advertising that greeted passengers as they steamed out of cities such as Wellington and into outposts like Auckland, which would become a hub for travelers on their way to the hot springs and mud pools in and around Rotorua, “the jewel in the crown of North Island tourism.”

By World War I, New Zealand’s Māori and pākehā alike had become “advertising native,” thanks to the countless posters that decorated railway stations, as well as the hoardings, or billboards, that paralleled routes such as the Midland line on South Island and the North Island Main Trunk.

Obviously, New Zealanders were not the only people on the planet subjected to advertising at the end of the 19th century and beginning of the 20th, but New Zealand made the pairing of trains and signage something of an art. In 1920, New Zealand Railways’ advertising branch, which was initially set up to manage the sale and placement of advertisements on NZR properties and right-of-ways, established a creative arm called Railways Studios, whose mission was to create advertisements for a range of clients, chief among them NZR. By 1922, the Studios and wider Publicity Branch boasted a number of printing presses, a screen-printing shop, and 74 employees, and by 1926, NZR had launched Railways Magazine, another jewel, you might say, in its advertising crown.

The posters, hoardings, and other examples of graphic art produced by the Studios from the interwar years through the 1950s encouraged travel on the NZR, of course, but the Studios also produced propaganda posters promoting everything from workplace safety to rodent control. Additionally, while the bulk of its work was designed to sell passengers tickets to tourist destinations, the Studios had numerous health-product clients, from the fishy smelling Lane’s Emulsion (“It’s Famous Because It’s Good”) to Wilson’s Maltexo, a malt extract for children, whose flavors—plain, cod liver oil, and halibut oil and orange juice—no doubt sent generations of New Zealand tads running. 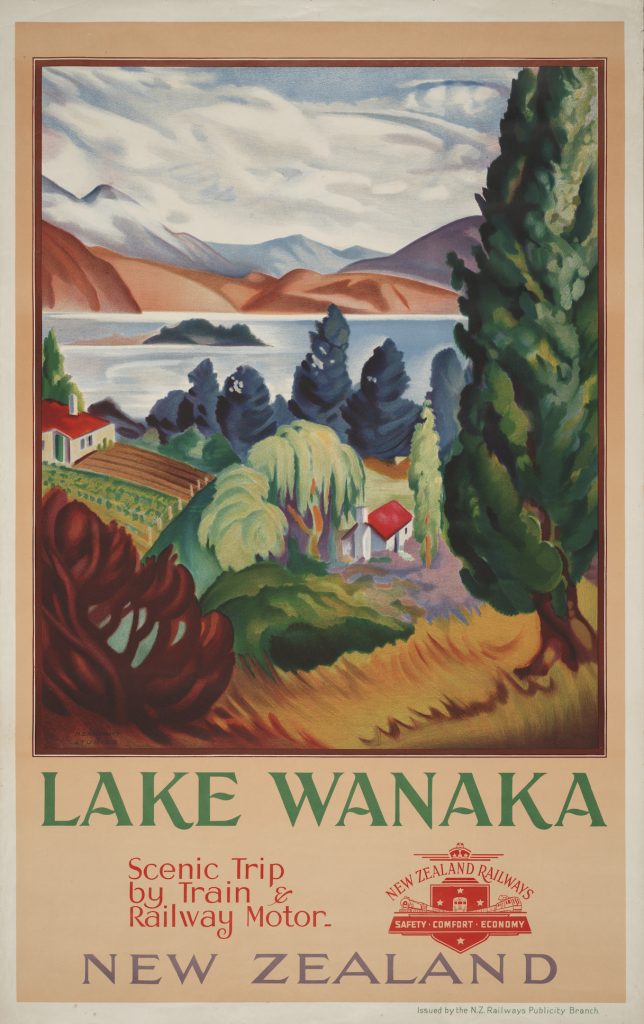 Interestingly, the Studios often promoted New Zealand’s travel destinations as health products themselves, places that offered fun, relaxation, and beauty while also being good for you. Skiing at Mt. Cook was a chance to soak up the “sunshine” and breathe in the “fresh air,” while a train ride to Hanmer Springs was sure to end in a “healthful holiday.” “Health and sport” were the draws at Helensville Hot Springs, the mineral baths at Rotorua promised to deliver “nature’s cure,” and Te Aroha was billed as a “fountain of health,” thanks to its numerous spas.

Amid the propaganda and product pitches, the Studios managed to produce some very fine examples of 20th-century graphic art. Indeed, artists such as Marcus King and John Holmwood regularly elevated what could have been rote advertising pitches to the realm of fine art. Alsop gives King his new book’s cover, and we can see Holmwood’s artistry in a series of posters from 1938. Some showcase the scenic beauty of destinations such as Mt. Egmont, Lake Wanaka, Queenstown, and Fiordland, others depict sport fishermen reeling in a big one at Bay of Islands or a pair of paddlers on the Wanganui River. As travel posters designed to sell train tickets, they were probably more beautiful than they needed to be. 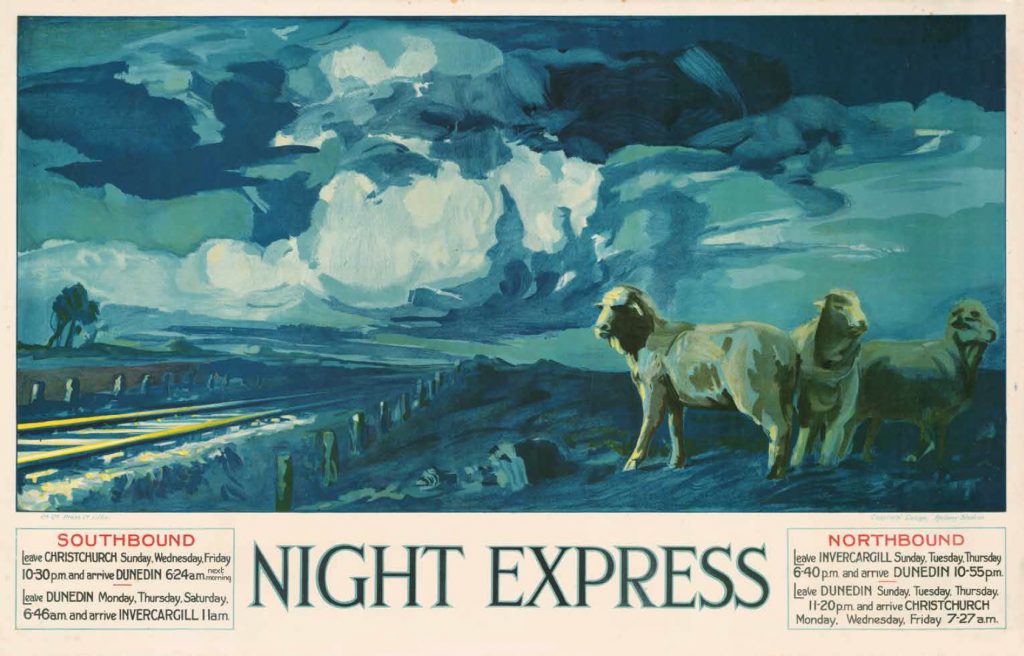 Alsop and company’s book is filled with such examples of graphic art that flirts with the finer stuff, although the vast majority of its gems lack attribution since most New Zealand Railways posters were signed “Railways Studios,” if they were signed at all. Take the circa 1929 poster created by an anonymous artist, whose assignment was to promote the Night Express, a roughly 24-hour run on South Island connecting Christchurch and Ivercargill. In that poster, above blocks of text detailing the train’s “Southbound” and “Northbound” timetables, we are confronted by a moody, cloud-filled sky rendered in various shades of blue. Beneath this depiction of heaven hovering over earth, a trio of sheep graze in a pasture. Two appear to be in mid-bolt or about to, but one of the animals stands still, facing the other direction. Only by following the creature’s gaze do we see a pair of train tracks, and only then do we notice the tracks are partly illuminated in yellow, presumably by the headlamp of the Night Express, which the artist has cleverly left out of our field of vision. This is a great painting, no matter what it was selling.

Other products of the Studios, particularly the highly stylized output of the post-World War II years, are less important as works of art but perhaps more important for what they may have inspired. A seafoam-green, circa-1949 poster advertising New Century Salt, for example, features a diagonal row of red, white, and beige cylindrical salt tins receding into the poster’s top-left corner. As Alsop points out in a nearby caption, this was precisely the kind of commercial graphic art that many fine artists in the 1950s and ’60s would find so inspiring. Wisely, Alsop refrains from crediting the New Century Salt poster by an anonymous Railways Studios artist with giving Andy Warhol the epiphany that resulted in paintings and prints of Campbell’s soup cans, but he does correctly place the work of the Studios from this period in the same visual ether that gave the world Pop Art. 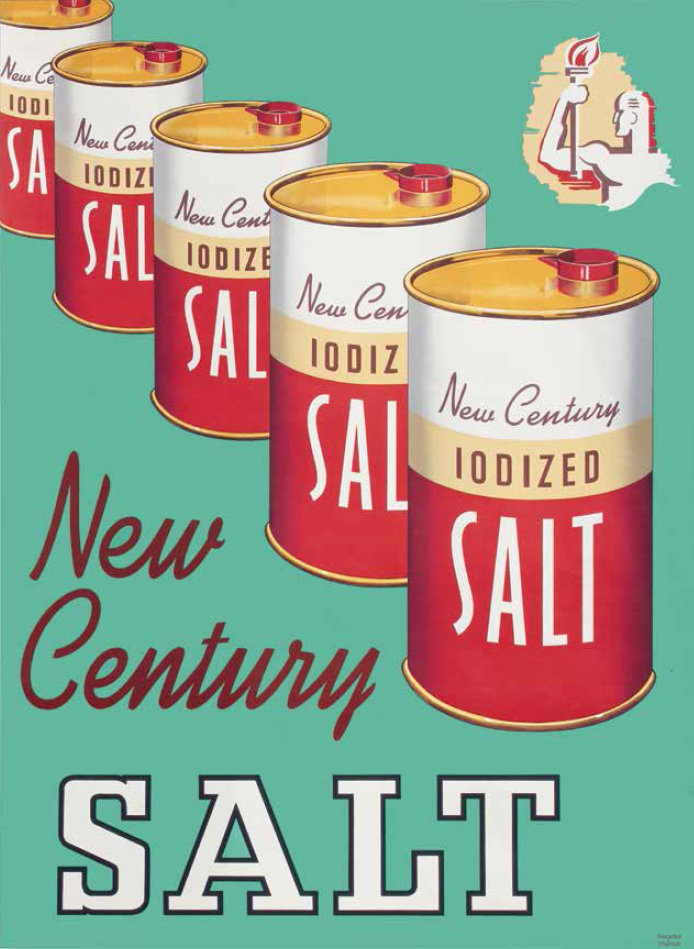 Today, alas, those of us not fortunate enough to live in New Zealand don’t often think of it as a land of railways. For most of us, it is far more familiar as the cinematic home of the hobbits, elves, and orcs who inhabit Middle Earth. For a select few 21st-century pākehā, billionaires who appear to be “prepper native,” it has lately become a place to build a bunker by the shores of the very same Lake Wanaka that was painted by Holmwood in order to wait out the apocalypse, whether it’s caused by climate change, an unprecedented finance crisis, or a virus that makes our global struggles with COVID-19 look like the good old days. So far, New Zealand has not had to sell itself to such well-healed settlers, but one can only imagine what the artists of Railways Studios would have done with that assignment.

(“Railways Studios: How a Government Design Studio Helped Build New Zealand,” by Peter Alsop, with contributions by Neill Atkinson, Katherine Milburn, and Richard Wolfe, is available from Te Papa Press and Amazon. If you buy something through a link in this article, Collectors Weekly may get a share of the sale. Learn more.)