This article notes the various styles of and uses for sideboard tables in the 18th century. It originally appeared in the October 1938 issue of American Collector magazine, a publication which ran from 1933-1948 and served antique collectors and dealers.

Although the variety of sideboards made by American craftsmen working in the Hepplewhite, Sheraton, and American Empire styles are well known to everyone, relatively little attention has been paid to the forerunner of this highly useful and decorative piece of domestic furniture. From about 1730 the sideboard table was made in America for approximately 50 years and followed the contemporary English fashion in form and decorative treatment. Structurally it was a frame without drawers and had a top of wood or, more frequently, a slab of colorful marble.

Of course, the households that were pretentious enough to require such a piece of furniture were relatively few during this period of colonial America, but enough examples of distinctly American workmanship have survived to make it absolutely certain that the cabinetmakers of the more important centers, such as Philadelphia, New York, and possibly Boston, made sideboard tables for their wealthier customers. 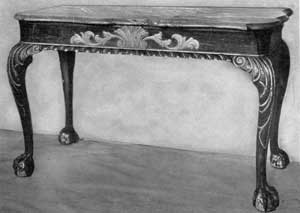 A Table of New York Make: The top is a shaped slab of gray marble with molded edge; the framework is carved and gilded. The ornamentation itself has elements of both the Queen Anne and early Georgian periods. These are central carved shell motif, carving of cabriole legs with boldly executed claw and ball feet. Together they date the piece about 1750.

At first these pieces consisted of a walnut frame with little decorative ornamentation. About 1745, however, more elaborate examples began to make their appearance. The wooden frame was handsomely decorated and the top was of carefully polished marble.

The finest of these sideboard tables rivalled those made in London at the time. So much so that we have been prone to assume that such pieces were of English origin, but close study of surviving examples and entries in contemporary records show that sideboard tables were made by American craftsmen throughout the period indicated. They ranged in size from about three and a half to six feet long. The larger pieces of course could have no other use than for the dining room.

On such a piece of furniture were placed the blazing tea kettle and other pieces of silver designed to keep food hot while the meal was being served. Here the marble top, in addition to being decorative, was obviously of practical use. The smaller examples of these Pre-Revolutionary tables could and probably did have other uses. One of them could well have served as a pier table, when placed between windows or beneath a mirror in a drawing room, or as an ornamental wall-table in the entrance hall.

Although some American examples of the sideboard table are known in which the legs are of the straight Marlborough type, with decoration of the wooden frame executed in appropriate straight lines, the majority were made with finely curved cabriole legs and decorative carving of shell and leaf motifs. The table illustrated which is of mahogany with top of gray veined marble, is unusual in that it is of New York workmanship.

Known to have come from the home of General John Mansill which stood at 12 Broadway, New York City, it dates from as early as 1750, as is shown by the details of carving and gilding. The gilt ball and boldly carved claws of the feet are unusually large. Likewise, the acanthus leaf carving of the knees is pronounced and outlined with gilding as is the gadrooned transverse molding on the lower edge of the frame. The carved and gilded shell decoration in the center of the front, however, is clearly reminiscent of that used on the backs of New England chairs of the Queen Anne period.

TablesTables are sometimes treated like the poor cousins to chairs, which have ca…