This article on Georgian silver, which was produced in the 18th and early-19th centuries, discusses the various design periods (such as Early Georgian, Rococo, and Adam), the various uses for silver items (from royal and religious purposes to use with tea, coffee, and chocolate in later years), and the historical context of the time period in which it was made. It originally appeared in the November 1937 issue of American Collector magazine, a publication which ran from 1933-1948 and served antique collectors and dealers.

For the average collector of old English silver the period of greatest interest lies between the years 1714 and 1830. During this Georgian period, so called because of the successive reigns of George I, II, III, and IV, the art of the silversmith achieved real greatness both as regards beauty of design and excellence of execution. Consequently it is not only well worth collecting but there are still plenty of fine specimens to be had today at reasonable prices. 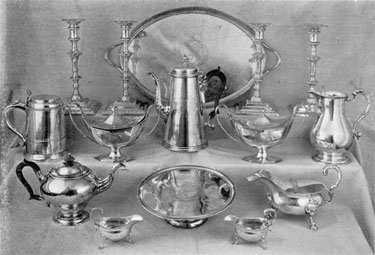 In order to see this period in its proper perspective as regards silver history, one must look back for a moment to the political and social trends of the Stuart and Queen Anne years that immediately preceded it. The last half of the 17th Century saw the end of the Civil Wars and the Restoration of the Monarchy. The former had proved disastrous to art in general and to that of the silversmith in particular. Further, the demands of Charles I for money for his war chest had resulted in the melting down of vast quantities of silver.

With the accession of Charles II and subsequent peace and prosperity, there came a tremendous reaction. A large quantity of ceremonial and decorative plate was made for the coronation by Sir Robert Vyner, goldsmith-banker and mayor of London; the livery companies of the City of London ordered loving cups and other plate to show their wealth; the Church ordered communion plate and ornaments for the altar; and the noble and wealthy families equipped their homes with such lavishness that their inventories show the possession of plate running into several tons weight of silver.

The diaries of both John Evelyn and Samuel Pepys make frequent reference to the display and ostentation of the court and to the extravagant quantities of silver furnished the numerous mistresses of the Merry Monarch. There was a bed made of massive silver for the apartments of Nell Gwyn.

And so, for the palaces of the King, for the royal chapels and for the great houses of England, such as Knole Park, Ham House and elsewhere, there was an amazing amount of silver made during the last quarter of the 17th Century. The pieces for decoration and display far exceeded anything made before or since. There was much silver furniture; such as beds, cradles, large tables, stands, toilet tables and high mirrors. Sconces, candelabra and candlesticks of silver held the candles which shed their light over the rich interiors of these homes. Even fire dogs and fire screens were of silver and on the chimney shelf stood huge vases of the metal, elaborately wrought.

For the table there were epergnes, fruit baskets, bread baskets and meat dishes. For the service of wine and beer there were posset bowls, beakers, tankards and standing cups. Sir Robert Vyner made a wine cistern for the coronation of Charles II which may be seen at the Tower of London and has been used at the coronation of the Kings and Queens of Great Britain ever since down to that of King George VI last May.

In the Morgan collection there is the famous tankard given by Queen Mary to one Simon Jansen for having safely conveyed King William to the Hague in 1691. The sides of the tankard are plain; engraved on the front are the arms of William and Mary, surmounted by the royal crown. It has the figure of a seated lion as a thumb piece and on the cover is an inscription which, translated, reads:

“When Simon fills this cup with wine; Her Majesty’s brilliancy in it doth shine; And as he the cup to his lips doth lift; He remembers full well the Royal gift.”

These limping lines are more than offset by the genius of the craftsman who made the tankard.

In addition to the wine cisterns or fountains, we have standing cups such as Samuel Pepys presented to the Cloth-workers Company in 1667 and the unique one in the form of the Royal Oak, surmounted by a crown which Charles II presented to the Barbour Surgeon’s Company in 1676, in commemoration of his memorable escape. 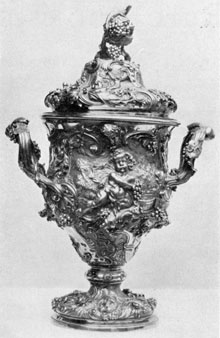 Ornate Silver-Gilt Cup: Made in London, 1755, by the famous Huguenot silversmith, Paul Lamerie, it is an ultra example of the ornate Rococo style.

Another interesting piece in use at the time is the monteith for cooling glasses – a bowl fitted with a movable rim which is notched or scalloped, its name is supposedly derived from a Scotchman named Monteith who wore a cloak with a scalloped border.

Because of this extravagant use and display of plate, the last quarter of the 17th Century was known as the “silver age.” After the Restoration large pieces became less common and with increased comfort and elegance in the homes, a number of new utensils were introduced. Tea, coffee, and chocolate now became known. Coffee achieved an immediate success and coffee houses sprung up all over England. Men foregathered in them to drink the new beverage, to gossip and discuss politics. So great was their reputation as centers of political agitation that Charles II tried to suppress them.

Chocolate was used more in the late 17th and 18th Centuries and tea, introduced as a medicine and for a time selling at a price between £2 and £5 per pound, did not become a popular drink until the middle of the 18th Century. After 1650, therefore, we find coffee, tea and chocolate pots; tea and coffee spoons; and, for a time, silver tea cups made after the style of the Chinese tea bowl.

During the late Stuart period silver design showed marked Dutch influence, tulips, anemones, acanthus leaves, fruit, animals and amorini were embossed in bold relief. With the coming of the Huguenot silversmith after the Revocation of the Edict of Nantes, 1685 a great change appeared in the art of the silversmith.

Heavy in weight, beautiful in outline and proportion, the silver pieces of the Queen Anne and early Georgian periods needed no other ornamentation than the exquisitely designed armorial bearings and mantlings found on most of the pieces and which in excellence of taste and execution have been rarely exceeded either earlier or later.

The Early Georgian period lasted from 1696 until 1725; the Rococo lasted from about 1725 until 1770. Up to about 1740 a considerable proportion of the work seemed to combine the forms of the new period with something of the simplicity of the old but with a marked tendency towards richer effects. The engraving which heretofore had been used only for heraldic motifs now began to play a more important role and during the years of George II’s reign the craftsmanship of the engravers was extremely high.

The Rococo style, which came from the Continent and achieved its greatest beauty in the Louis XIV style in France, was characterized by the use of unsymmetrical forms, broken lines and the lavish use of the scroll ornament.

Among the first to use this style was the Huguenot silversmith, Paul Lamerie, probably the greatest silver craftsman of all time. The epergne which he made in 1734 is an example of the early Rococo style and easily ranks as the finest ever made. A copy of it is now in the Victoria and Albert Museum. In that same year he made two beautiful chandeliers, which were hung in the Kremlin and were considered the most notable in existence. In fact so many of his pieces executed in the Rococo style have become famous that “Lamerie style” has become almost synonymous with Rococo. We must realize, however, that he worked in all the styles that succeeded each other during his long career from 1712 until 1751 and that the height of the Rococo fashion did not arrive until several years after his death.

The largest piece made at this time was a wine cistern, 5 1/2 feet long, 3 1/2 feet deep and 3 1/2 feet wide, weighing 8,000 ounces and with a capacity of 60 gallons. It was made by Charles Kandler of St. Martin’s Lane who, after three years labor, finished it in 1734. It was sold by lottery, won by a Sussex gentleman and soon after acquired by the Empress of Russia who put it in the Winter Palace at St. Petersburg. One can only hope that it is still in existence.

Because the liquid for which they were designed was a decided luxury, early teapots were, of course, small. With the coming of the Rococo period tea had become more common and the price more reasonable. The size of pot naturally increased and now came that most beautiful design of all, the inverted pear shape. This when ornamented with the fine engraving of the day was indeed a thing of beauty. Nor did the tea caddy lag behind. It had developed from a simple box with lock and key to a vase-shaped canister elaborately embossed. 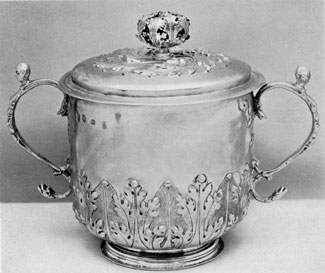 A Late 17th Century Cup with Cover: The hallmarks show it was London-made in 1682. The maker's touch is E N.

The end of the Rococo period came rather suddenly in 1770. Again an influence swept over the Continent and later into England which completely changed existing forms of domestic art.

Excavations at Pompeii and at Herculaneum had awakened an interest in classical form throughout Europe. Artists and architects travelled to Italy to study, rich travellers bought all sorts of objects found in the ruins and shipped them to England to adorn their homes. Illustrated books on Greek and Roman art began to appear. Designers in England became acquainted with classical forms and adapted them to modern needs. Of course, the great exponents of this style were the Adam brothers and Robert Adam designed plate for some of his clients whose houses he had built. The silversmiths Rundell and Bridge executed these designs, as well as the designs of that versatile sculptor, John Flaxman, several examples of whose work are to be seen in the royal collection at Windsor Castle. Flaxman, it will be remembered, also designed for Josiah Wedgwood.

The classical period was characterized by the use of the classical urn decorated with floral swags, draped linen suspended between oval shields, rams’ and lions’ heads and acanthus leaves. Engraving ceased to be applied as profusely as during the Rococo period but a new type, called “bright cut,” was developed by the Birmingham silversmiths and reached heights of great beauty between the years 1770 and 1800.

All through the history of the English silversmiths we find the names of women. In many cases it is not known whether they were the actual craftsmen or whether they simply carried on a business left to them by husband or father. But in the case of Hester Bateman who registered her mark in 1774 in London, there is no doubt but that she was a craftsman. Her work is considered the supreme example of the classical period in the art of the silversmith and is notable for its beauty of outline, delicate proportions and for the matchless excellence of engraving.

English SilverNo one knows for sure, but some historians speculate that the word “sterlin…