Flashback: Sources of American Chair Design in the Federal Period

This article describes chairs made in England and America in the 18th century, noting their influences and how they compare to drawings in various craftsmen’s guides that were popular at the time. It originally appeared in the February 1947 issue of American Collector magazine, a publication which ran from 1933-1948 and served antique collectors and dealers.

It was the late R. T. Haynes Halsey who first noted that as early as 1775 there was a project in Philadelphia to publish working designs for furniture makers, a Gentlemen and Cabinet-Makers’ Assistant, in which John Norman was to engrave 200 designs by John Folwell. The plan was never realized because of the tumultuous revolutionary events about to commence, but it is a significant indication that the American cabinetmaker had reached a stage of advancement in which he was becoming ever more appreciative of the formal rules of design, changes in fashion and the need to keep himself au courant with the best practice. 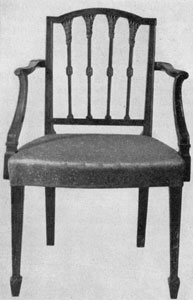 In the Federal period the use of published designs by Hepplewhite, Sheraton and Shearer was a determining factor in the evolution of American chair design. There are numerous instances of the use of certain plates and modification of others with a freedom and imagination which justify the recognition of a distinctly American style.

It is true that there was a direct relation between certain American chairs and designs by Chippendale in the plates of his Director. For example, plate X of the Director is the source of a group of Philadelphia chairs described at the time as “fan back” and now generally described as “Gillingham type,” since one of them bears Gillingham’s label. In general, however, the instances in which American furniture can be traced directly to English published designs before the Hepplewhite-Sheraton period are few. 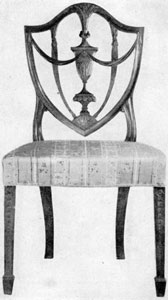 2. Hepplewhite sidechair made in Salem.

After the Revolution there was a decided change in this respect, no doubt partly attributable to the increasing dissemination of press publications in general. The altered conditions of the times brought better means of communication through the development of merchant shipping. Immigration increased about 1790 and contacts with England, interrupted during the Revolution, were renewed. There was a growing pride in the quality of American goods, so that we read in David Longworth’s New York Directory for 1805, “The curious and useful mechanical art is brought to very great perfection in this city. The furniture daily offered for sale equals in point of elegance any ever imported from Europe…”

By 1790, the period when the new styles came into evidence in American furniture, financial recovery was well assured and a period of building had begun. The inauguration of Washington the year before had stimulated a national refurbishing. While American craftsmen were often patronized for patriotic reasons, some wealthy persons continued to import furniture from Europe. 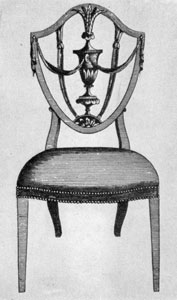 In his Journal of an Excursion to the United States of America (1794), Henry Wansey speaks of dining with Mr. Bingham (the husband of the lady who had a portrait of Washington painted by Stuart as a gift for the Marquess of Lansdowne) describing his magnificent house and gardens “in the best English style, with elegant and even superb furniture. The chairs of the drawing room were from Seddon’s in London, of the newest taste; the back in the form of a lyre” an interesting observation in view of the fact that in the next decade the typical lyre-back chair of Duncan Phyfe derived from such examples.

By 1790, American furniture makers were aware that they needed to master the classically based, new manner which had come into fashion in England just as the American Revolution had begun. The whole foundation of subsequent English styles in the 18th century happened to be Greco-Roman, and because the ideals of the new Republic were based on concepts taken from Roman sources, anything Roman was received here with a kind of sanctity. 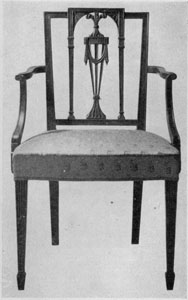 Robert Adam’s interpretation of antiquity was adapted to furniture by Hepplewhite and Sheraton. In the sphere of ornament, urns, drapery swags, paterae and pendant husks were executed after a new examination of Greco-Roman monuments, the old, rococo variants on Renaissance forms being reckoned no longer satisfactory.

In these circumstances a shelf of design books became a necessity for any draftsman who catered to the growing wealthy class. Books of the arts of design were in demand. There were five American editions of the architectural works of William Pain, and the prolific Asher Benjamin began publishing in 1797. Cabinetmakers in New York published price books similar to those issued in London. For actual designs, however, four major volumes — Hepplewhite’s Cabinet Makers’ and Upholsterers’ Guide (1788), Sheraton’s Cabinet Maker and Upholsterer’s Drawing Book (1791 and 1793), and the designs of Thomas Shearer in The Cabinet-Makers’ London Book of Prices and Designs for Household Furniture (1788) — appear to have been the chief sources for actual models, sometimes copied, sometimes modified. 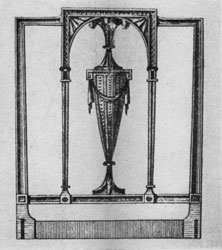 5. English source of American back in fig. 4.

As an example of an American chair design taken in 1790-1800 directly from Hepplewhite’s 1788 Guide, there is an exceptionally fine chair in the Karolik collection at the Museum of Fine Arts, Boston, which was originally owned by Elias Hasket Derby of Salem about 1795 (fig. 2). This design is taken from Hepplewhite’s plate 2 and in detail follows the English pattern (fig. 3) though basically altering the form according to American feeling. Thus the supports of the shield are shorter, more substantial and more broadly spaced, while the point of the shield comes nearer the seat of the chair, these being characteristic in general of American Hepplewhite chairs as compared with their English cousins. 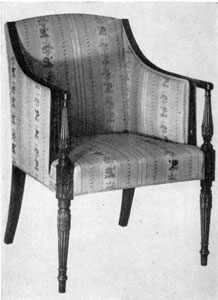 In the Karolik example the carving of the rosette segment at the point, and of the medial splat, a vase form supporting a graceful spray of wheat-ears, is of the highest quality. Only an exceptional master could have carved the drapery crossing the secondary splats to the upper corners of the back rail. The attribution to Salem’s master carver, Samuel McIntire, is well grounded.

This chair probably was acquired at the time that Elias Derby was building and furnishing his handsome house overlooking the waterfront at Salem, a mansion which would have been outstanding even in England at the time and unfortunately had only a brief existence. In the sketch that Robert Gilmor of Baltimore made of it we have a suggestion of the manner in which it dominated the Salem skyline. Bulfinch supplied the plans for which McIntire drew the final form and executed the elaborate carvings of the interior; his bill for the latter was over £238. 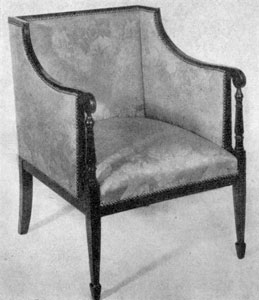 In the New York armchair (fig. 4), with its pierced urn splat, there is an example of a design followed almost literally from plate 36 of Sheraton’s Drawing Book (fig. 5), one of the most graceful of his square-back designs, with a splat panel superimposed on the cresting rail. Changes in detail are very slight yet it may be noted as an improvement that the vase has been rendered as a pierced form and is therefore no longer realistic but a freely interpreted structural element of converging lines. The carving of the graceful drapery and the overlapping leafage at the base show craftsmanship of a high order. It will be seen that this is another instance in which the American chair has the seat rail nearer to the seat than the English design. 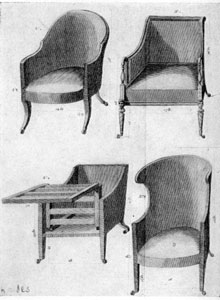 In the upholstered chair from the Karolik Collection (fig. 6), one of a pair attributed to John Seymour of Boston, and in another chair of American origin which appeared in a recent sale at the Parke-Bernet galleries (fig. 7), there is close relationship to a chair illustrated in the upper right hand corner of Plate 8 of Sheraton’s Cabinet Dictionary of 1803 under the heading “Various Easy Chairs” (fig. 8), this being described as a “fauteuil having a molded top-rail or arm, and turned stumps, which are either gilt or painted…” 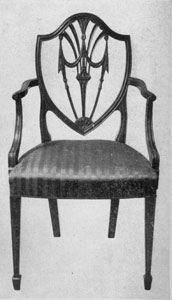 So far as the writer is aware this plate has never been indicated as the probable source of design of this beautiful chair. Or it may be that “Seymour” arrived at the chair independently, as a development from a sofa form, shortened. In that case it could have been made before 1800. Compared to Sheraton’s design, the American chair shows much finer treatment of the leg, a structural and stylistic harmony which unify it with the character of the arm support. It is interesting however, that the chair in fig. 7, of provenance unknown except that it is American, has a back which looks like one of the other designs on Sheraton’s plate 8 (at the lower left), a resemblance which may indicate that the maker had studied this particular plate or had it before him as he worked.

Two arm chairs in the Karolik collection, a shield-back of Hepplewhite inspiration, probably New York, 1790-1800 (fig. 9), and a Sheraton square-back, also from New York (fig. 1), are interesting as free renderings of plates in the two great design books. The maker of the supremely fine Hepplewhite chair may have studied Plate 4, chair 9, of Hepplewhite’s Guide, dated Sept. 2, 1787, while the maker of the Sheraton chair may have been inspired by the upper left chairback on plate 28 of Sheraton’s Drawing Book.

In both instances the American treatment is simpler and also in better taste. In such chairs one sees examples quite as fine as English workmanship produced, both as to design and carving. While earlier 18th century American chairs in the Queen Anne and Chippendale styles frequently show great originality, those of the Federal period can be compared point by point with the English without disparagement. English designs furnish the foundation but there are minor points of difference which express our American taste dearly enough to justify us in distinguishing an American style.