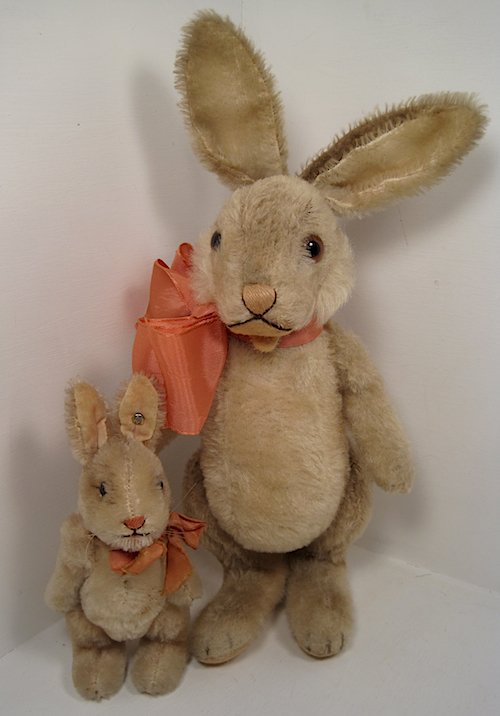 What we have here are two Steiff Niki Rabbits. Easter season or not, many Steiff enthusiasts consider this “hare-raising” design to be one of the most beloved and collectible postwar Steiff patterns ever produced. Measured standing, and not including their ears, large Niki is 22 cm and little Niki is 14 cm. Both are made from tan mohair, have brown and black pupil eyes, small pink hand-embroidered triangular noses, and felt foot paw pads. Big Niki has mohair-lined ears and an open, peach-colored felt mouth, while little Niki has pink velvet lined ears and a closed mouth, indicated by black embroidery. These handsome hares were produced from 1951 through 1964 in 14, 17, 22, 28, and 35 cm.

Their history
Rabbits are a classic Steiff design, so much that they are given their very own chapter in Gunter Pfeiffer’s “Steiff Sortiment” books. These tomes are considered the “gold standard” of Steiff references for collectors around the globe. It is also no surprise that rabbits appeared in the first printed Steiff catalog—as a matter of fact, at least seven different rabbit designs were featured in this debut issue of 1892!

Niki has some big legacy-shoes to fill, but she has several unusual features that make her quite the standout. First, Niki is five-ways jointed, which is exceptionally rare for Steiff rabbits. The vast majority of vintage Steiff rabbits are not jointed or simply head jointed. Five-way jointing is labor intensive and, in turn, quite expensive from a production standpoint. Second, the larger Niki rabbits have open mouths. As far as my research can tell, Niki is the first Steiff rabbit to be produced with an open mouth, although many have been produced after her. And third, Niki has a distinct playfulness to her that is quite reflective of the era in which she was produced. In the early 1950s, after the factory reopened for business postwar, Steiff launched a large number of charming, irresistible new designs to reintroduce the world to its quality and craftsmanship. Clearly, according to collectors then and now, Niki is one blue-ribbon bunny.

Where I got them
I purchased both of these Niki rabbits online through a dealer in Germany. I had always wanted a few examples of this classic design for my hug, but was never able to find them here in the United States though the regular channels. Thank goodness for Babel Fish! I used this tool to translate my offer and note to the seller from English to German, and their responses back to me from German to English. Enough didn’t get “lost in translation” that we managed to quickly come to an agreement over a few emails. When the rabbits finally arrived, I was delighted that they were in better shape than advertised. I gave them a Woolite bath and positioned them as a centerpiece on my dining table—an early “hare-binger” for the much beloved Easter season. 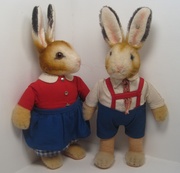 Rita Smith on the Story of Children’s BooksAngry Chicken's Amy Karol on Sewing, Vintage Slips, and Her Apron Obsession