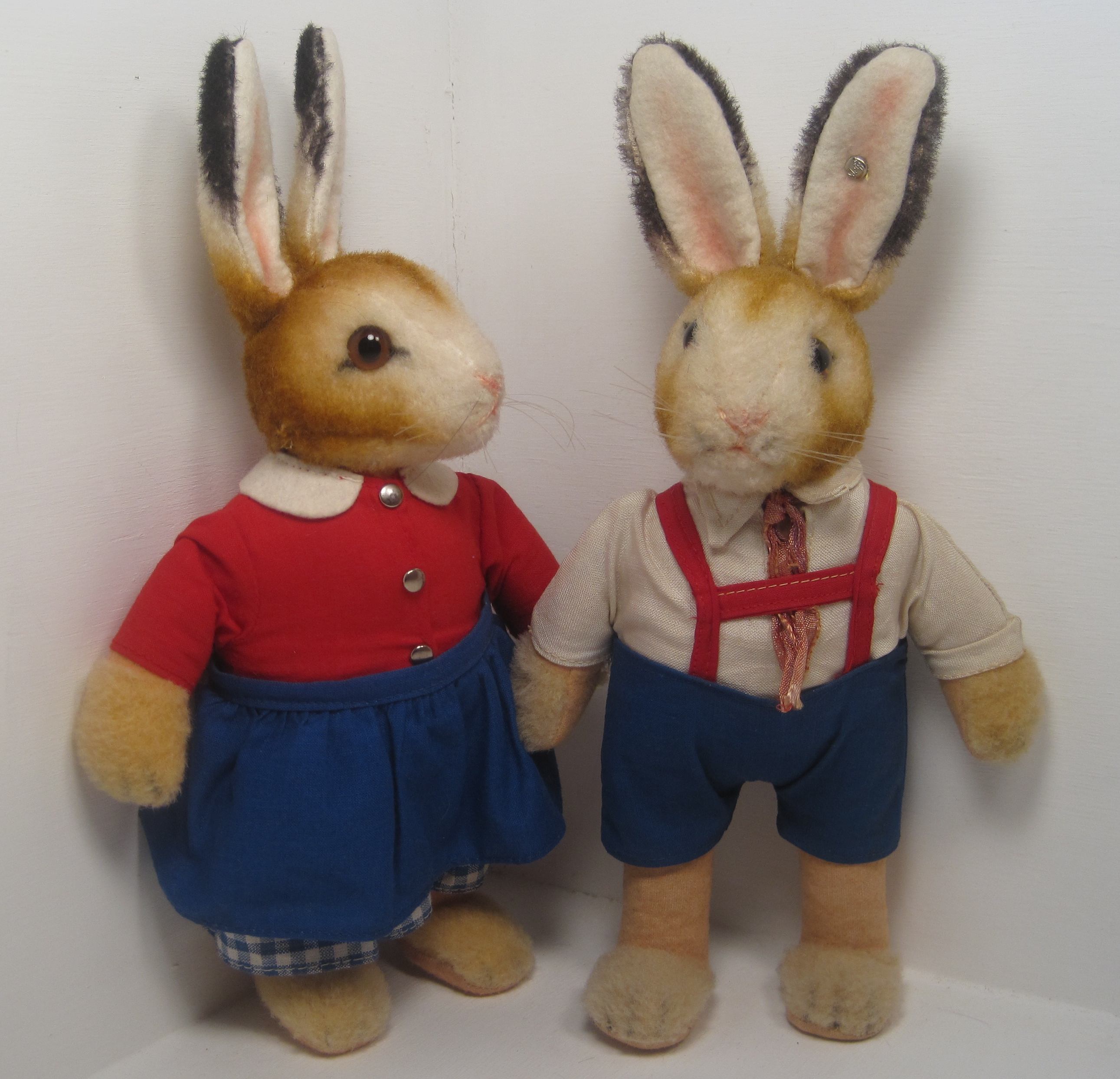 What we have here are Steiff’s delightful “Pupphase Bub and Maedel,” or rabbit doll boy-and-girl pair. This particular set is 25 cm tall, although they were also produced in a whopping 60 cm size (those were probably meant as window display pieces). They are standing on flat feet and have swivel heads. Their heads, paws, and feet are made from wool plush, while their bodies and paw pads are made from felt. They have very large brown eyes with black pupils, felt-lined ears, pink hand embroidered noses and mouths, and clear monofilament whiskers. They are dressed in matching traditional German clothing, with the boy in shorts and suspenders and the girl in a dirndl and apron. Both have their cursive letter style Steiff buttons; the girl retains her US Zone tag in full while the boy has remnants of his. The combination of these two forms of ID dates this particular pair at approximately 1952. Overall, this darling duo was in the Steiff catalog from 1949 through 1955. The 60 cm pair was available from 1951 though 1966.

Their history
This is a classic Steiff design that has its roots in the early 1930s. Starting in 1932, Steiff produced a series of flat footed, standing rabbit pair dolls that were available in a variety of well tailored, matching outfits. These included everyday wear, pajamas, swimwear, traditional wear, and winter wear. These sets were produced in maize or white plush in 14, 22, and 28 cm through 1943. Early postwar, Steiff continued the production of Pupphase Bub and Maedel, but renamed the set Hansili in 1954 (“hase” means rabbit in German). They also extended this doll animal line to include two additional models of rabbit pairs, a Dachshund doll boy and girl set, and a fox doll boy and girl set. Overall, all of these sets were discontinued by the early 1960s, probably due to their highly detailed, labor-intensive (i.e., costly) production requirements.

Where I got them
This charming couple was purchased as a pair at the October 13, 2010 Christie’s Steiff auction in London. Although I have always had a passion for Steiff’s animal dolls, I was not actually planning on bidding on this pair. I saw them at the auction preview the day before the event—given their appeal and condition, I figured they would sell at a price point far exceeding my humble budget. When their lot was being auctioned off, though, much to my surprise, there was minimal interest. I waived my paddle at the last possible moment, securing them at a “relatively” modest price. When I finally picked them up in the collections area at the end of the nine-hour (yes, nine!) auction, I could not believe they were actually mine, and got a little weepy as I wrapped them up in bubble paper for their long journey home.

Rita Smith on the Story of Children’s BooksSteiff I Love: March Madness