What we have here is Steiff’s version of the month of March: “In like a lion, out like a lamb.” Both of these examples have a unique secret that makes them exceptional collectibles and of great interest to Steiff enthusiasts. 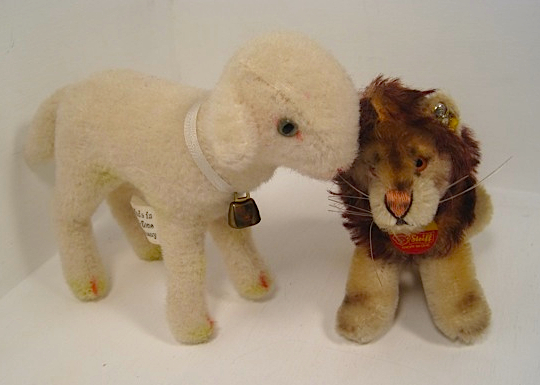 First the lion, Steiff’s handsome 12 cm mohair Loewe Leo, or Leo Lion. Leo is unjointed, sitting, and has brown glass pupil eyes, mono-filament whiskers, and a prominent pink embroidered nose. He also has a very pronounced brown tipped mane—the same mohair and tipping details the end of his tail. Sitting Leo was made in 12 and 22 cm from 1956 through 1976.

Now the lamb, a lovely and pristine 14 cm unjointed Steiff Lamm, or Lamb. She has a charming, youthful innocence—her simplicity makes her so appealing. Lamb is made from wool plush, which feels like an ultra-dense, slightly rough mohair. She has beautiful green glass pupil eyes, a little bell tied on by a light blue ribbon, a simple red stitched mouth and nose, and delicate pink airbrush detailing on her eyes, ears, and paws.

What makes them so special
Steiff’s Leo Lion was manufactured in both this sitting and standing versions in 10, 17, and 28 cm from 1964 through 1975. Both styles are considered “essential” core collectibles for most Steiff enthusiasts. Fortunately, they are relatively common and usually not terribly expensive. So what makes this Leo so exceptional? Take a close look at his ear. He has not one, but two Steiff lentil buttons! The lentil button, which is a puffed out hollow rivet with the word “Steiff” written on it in tiny script letters, dates the piece from 1969 through 1977. This “double button” is a highly unusual occurrence; such “mistakes” are usually culled or corrected via Steiff’s rigorous quality-control processes. Leo is the only “double button” item in my Steiff collection, which now numbers north of 500 vintage items.

Lamb was one of the first Steiff items produced postwar, starting in 1948. She was manufactured in six sizes, ranging from 10 to 35 cm through 1976. It is important to note that she was also manufactured prewar in 14, 17, 22, and 28 cm from 1928 through 1943. For identification, this lamb has a crisp “Made in US-Zone Germany” tag on her front left leg and a raised script Steiff button in her ear.  This combination suggests her date of production at somewhere between 1949 and 1953. However, the details of her pattern, especially around the shape of her head and her seams, are those of the prewar model. It is highly probable that this particular lamb was manufactured in the late 1930s or early 1940s, stored away in inventory during the war, and unearthed after the factory reopened for business in the very late 1940s. The item was then detailed with the button and identification of the early 1950s as the last step in the Steiff manufacturing and branding process.

Where I got them
Yes, these strange bedfellows were discovered together on an adventure in Reno, Nevada. I was accompanying my husband on a business trip; we decided to sneak away from the meeting for a little antiquing fun. We had read about a very nice antiques mall a few miles away from the convention center called Antiques and Treasures. I first spotted the lamb in a glass case toward the back of the store. I was attracted to her outstanding condition and “old-fashioned” look. It was only after I got her home and studied her closely that I realized she just might be one of Steiff’s “retrofitted” prewar treasures. The lion was hiding on a bottom shelf of a case near the entranceway of the store; I asked to see him, as I was looking for the smaller version of this gentle giant. I inspected him closely for condition and simply could not believe my eyes, or luck, when I saw his double-button status. I literally started dancing in the aisles of the antiques mall with excitement upon discovering his secret.

Rita Smith on the Story of Children’s Books

Steiff I Love: Vintage Panda BearsCowboys vs. Spacemen: How the Toy Chest Was Won