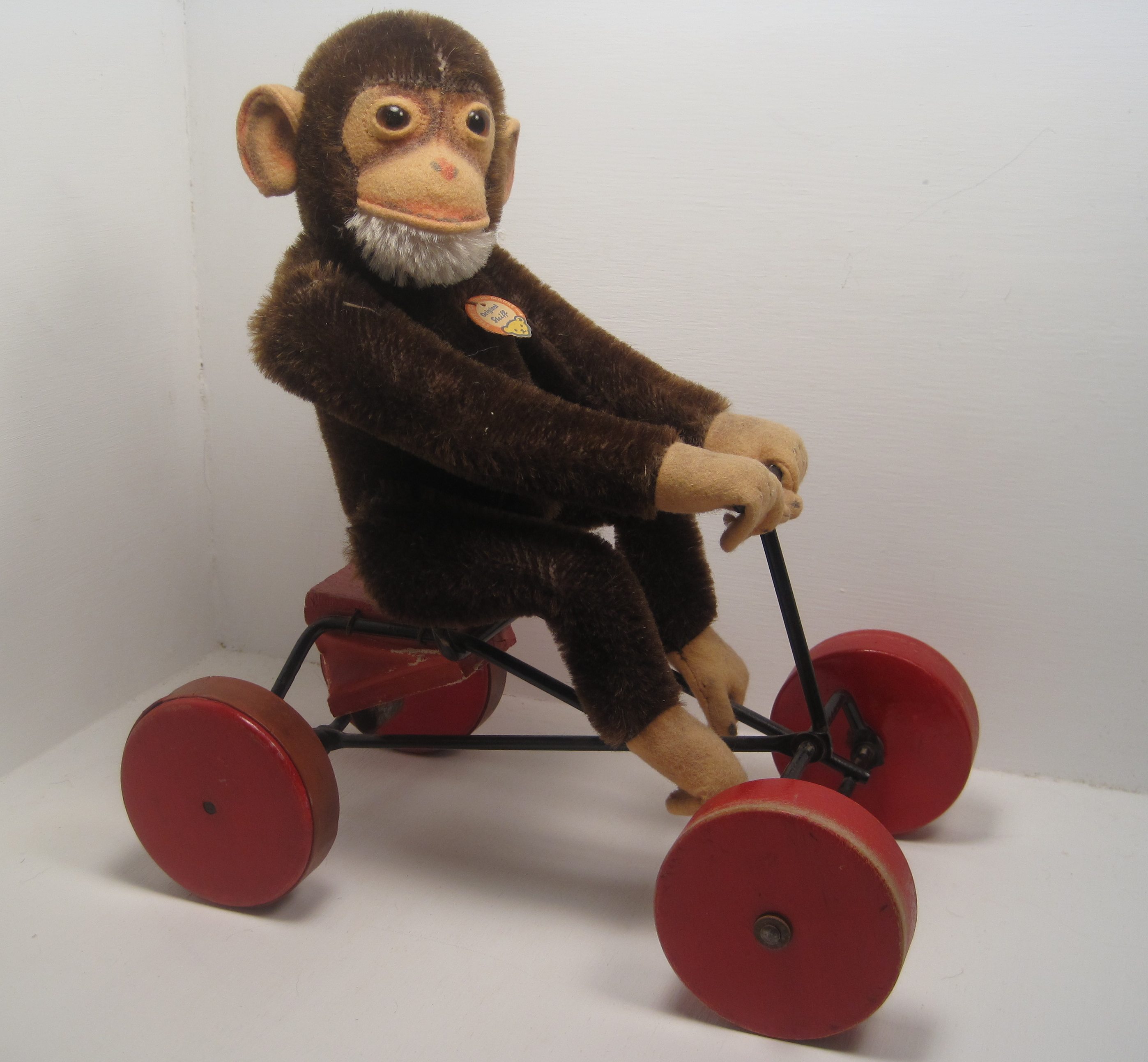 What we have here is a post-World War ll Steiff “Record Peter.” “Record” refers to a Steiff item on wheels while “Peter” is the name of the monkey design. This chimp is also known as “Jocko,” and his general pattern has been a beloved Steiff classic since 1909. Record Peter is 25 cm, five ways jointed, and primarily made from brown mohair. He has peach felt hands, feet, face, and ears; a white mohair chin; and black and brown pupil eyes which are deeply set into eye pockets. He rides upon a black metal, four-wheeled cart. The wheels are wooden and painted red; the back ones have a strip of red rubber around their rims, probably for traction. When Record Peter is pulled, his arms and legs move back and forth vigorously, giving the appearance that he’s working hard to keep his cart moving. Although this Record Peter does not have a Steiff button, he does have his bear-faced chest tag, dating his production to the 1953-to-1971 timeframe.

His history
The first creatures on “moving machines” appeared in the Steiff catalog in 1896 and were called “velocipede riding animals.” These were 30 cm animals on metal tricycles that appeared to be peddling their bikes when pushed forward or backward. Record Peter, a natural evolution of these early riding animals, made his debut in 1912 in 25 cm and was an immediate success. The 1912 catalog described him as: “Record Peter, in silky brown mohair plush, seated on a self-drive chassis with sturdy wooden wheels and automatic sound box. Virtually unbreakable mechanism. Simply has to be pulled along by attached cord.” Through the early 1940s, he was made with a neck ruff in red, blue, yellow, white, green, red, and black mohair, and in sizes ranging from 10 to 30 cm. Record Peter was one of the first items Steiff manufactured when the factory reopened postwar in the late 1940s. A 25 cm version was produced in brown silk plush in 1949, then in brown mohair through 1970. Although Steiff collectors covet most Record Peters, those in colors other than brown, and in sizes different than 25 cm, are considered incredible finds.

Where I got him
This “chimp on the go” was purchased in 2006 at an antiques and ephemera show in the Boston area. The show started at 10am and I wanted to be there when the doors opened, to get first crack at any vintage Steiff. My husband and I pulled into the parking lot at 9:15, and our hearts sank. Apparently a few other people felt the same way—the line to the show snaked all around the building! Thankfully, the waiting was worth it. I spotted this Record Peter in a booth about halfway through the show. I immediately fell in love with it, but was hesitant to buy it because of its price. I walked the rest of the show but couldn’t get him off my mind. I went back to the seller and suggested a price that was within my budget. My offer was accepted, and I could hardly contain my delight. Almost five years later, I feel the same way about the piece!

Steiff I Love: RabbitsAmerican Picker Dream, Part I: Mike Wolfe On His Love Affair With Bikes