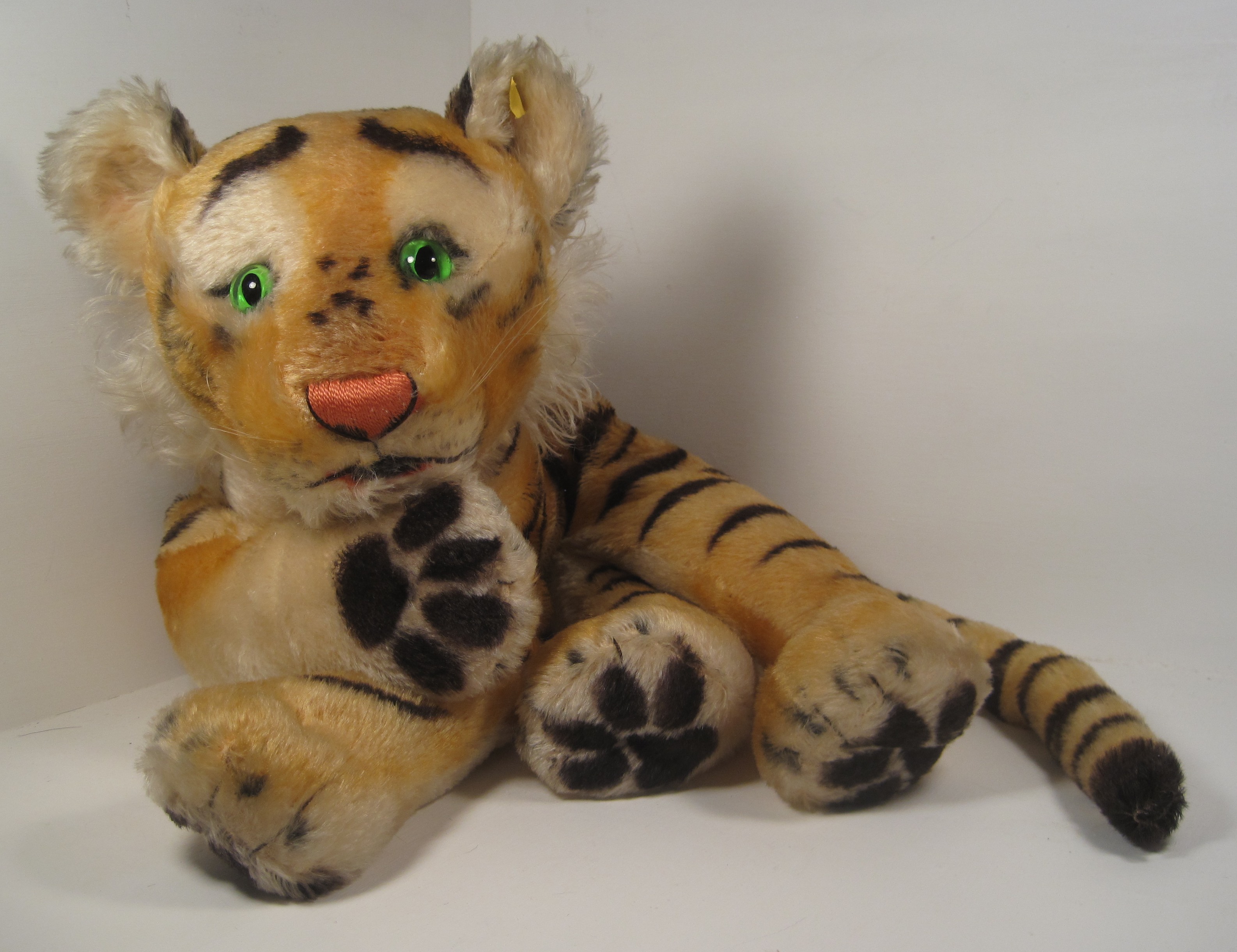 What we have here is a Steiff tiger pajama bag. He is about 40 cm long and about 20 cm tall. He is in Steiff’s “lying” position, meaning he is curled up with his legs resting gently to his side. He has piercing green and black eyes, a pink embroidered nose, and tufts of longer mohair around his jowls. Tiger is head jointed and made from short mohair, which has been hand airbrushed and stenciled to give his coat a most authentic and realistic look. Right down the middle of his back is a long metal zipper that extends from practically his neck to his tail; this hides his internal silk-lined pouch designed to hold the sleepwear of a toddler! Besides his pristine condition, the other factor that makes this item so interesting is that it is not cataloged in the standard Steiff reference books. This makes him quite desirable from a collector’s standpoint. From the product-development perspective, this rarity is probably a modification of Steiff’s standard-line lying tiger cub, which was produced from 1953 through 1978 in 17, 28, 43, and 60 cm.

His history
Pajama bags have always been a “novelty” item for Steiff. They first appeared from 1930 through 1937 and were called “night dress bags.” They were 30 cm square in size. Each had a zipper, velvet lining, and featured the head of a famous Steiff character of the time. These included Teddy Baby, Bully the bulldog, Charly the King Charles spaniel, Molly the puppy, and Siamy the Siamese cat. Pajama bags appeared again in the 1960s with Zipper Cockie Cocker Spaniel, Zipper Zotty the Teddy Bear, and Zipper Nauty the polar bear. A large mohair walrus pajama bag was produced for the high-end toy store FAO Schwarz from 1962 through 1972. Pajama bags made their final appearance in the Steiff line from 1970 through 1976. Three models were produced: a Zotty bear, a panda bear, and a rabbit. All were made in washable dralon, had hollow bodies, were lined in plain cotton material, and closed with a strip of Velcro on their bottoms.

Where I got him
I won this jungle gem though an online auction in the summer of 2008. In scanning the auction lots, I initially noticed the tiger, but assumed he was the relatively common standard-line edition and did not place a bid. It was only after a second review of the lots that I noticed a single line in his description, indicating a “zipper feature” on his back. I knew then that he was a pajama bag, and an uncataloged one at that. I do not think others noticed this detail, either, as he had minimal interest. I placed my bid and headed off to a large formal family occasion. At the expense of appearing rude, I excused myself about 20 times from the gathering to check on the progress of the auction on my handheld. Thankfully I won, and at a very good price! Turns out the original owner was from the Princeton, New Jersey, area and collected tiger-themed items as a teenager in the 1960s. 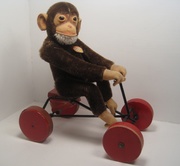 Taxidermy Comes Alive! On the Web, the Silver Screen, and in Your Living RoomCoveting The Craziest Cat-People Collectibles