Flashback: The American Scene on China

This article discusses the popular china made in Staffordshire, England in the 18th and 19th centuries and includes information about the designs and American historical themes that were popular. It originally appeared in the August 1941 issue of American Collector magazine, a publication which ran from 1933-1948 and served antique collectors and dealers.

One thing suggests another in antique collecting, as with anything else. The person who buys a piece of antique furniture is apt to follow it up with others and eventually be attracted to related household accessories that rank as collectibles. Thus, if one has acquired a tea table or a dresser, some colorful china is a natural sequence. 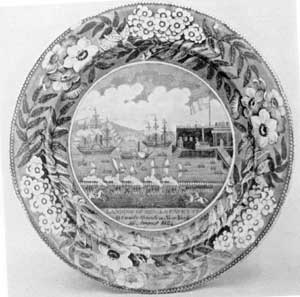 A "Landing of Gen. Lafayette" Plate: The blue-and-white Staffordshire transfer-ware service, of which this plate is a part, was made by James and Ralph Clews, whose pottery was at Cobridge. It was produced shortly after General Lafayette made his return visit to the United States in 1824 as guest of the nation. The view, showing the Battery Park, New York, Castle Garden, and welcoming ships, was taken from a contemporary engraving made by Samuel Maverick, an impression of which must have been sent to the Clews pottery almost as soon as this print was issued.

Of the wide field one has to choose from, probably none has more general appeal than the old blue-and-white ware bearing American historical views. Made in the kilns of Staffordshire, England, that compact inland county so long devoted to pottery making, so intimately associated with such world-famous names as Wedgwood, Spode, Wood, Clews, and Copeland, it was bought so enthusiastically by Americans of the early 19th Century that the collector of today may acquire desirable examples without too great a strain on his purse, although certain rare pieces command high prices.

Further, although clay and workmanship were English and the deep blue of its decoration had originally been discovered by an unknown potter in faraway Persia many centuries before, reaching the Western World by way of China and the Far East trade, one may consider this ware typically American. It was not only naturalized by purchase over a hundred years ago, but the scenes depicted were in many instances reproduced from drawings or paintings done by American artists. And in the views that were part of the decoration of this colorful china, one may see a pictorial record of life and events in America when the young Republic numbered considerably less than forty-eight states in its Union and surviving veterans of the Revolutionary War were still numerous.

Staffordshire, where this ware was made, is an area nearly one hundred and fifty miles from London and near enough to Liverpool so that its products could be readily shipped from that port to the receptive market of America. Here, in a district about ten miles long and five wide, were six important potting towns. China-making was an important industry in this area by the latter part of the 17th Century but production of decorative china, inexpensive enough for the average citizen, had to wait until after the invention of transfer printing which occurred in the 1750’s. It took twenty years for the process to reach Staffordshire. And in that slow-moving age, forty more went by before the American market was being wooed by blue-and-white transfer ware.

The period of Staffordshire decorated with American historical views runs from shortly after the close of the War of 1812 to 1850. That produced during the first decade in the second half of the 19th Century must be considered late; and from 1860 on, modern. Definitely so is any china, blue-and-white transfer or otherwise, marked with the country of origin. This shows that it was produced after 1892 when the provisions of the McKinley tariff required that foreign-made pieces be so marked.

Designs in historical American Staffordshire are numerous and include important contemporary events and persons; arms of states; such buildings as New York City Hall, Capitol at Washington, Boston State House; and such scenes as Niagara Falls, places along the Erie Canal, New Orleans, and buildings at Yale College. The one illustrated is known as “Landing of Gen. Lafayette.” This occurred at Castle Garden, New, York, August 16, 1824. This visit of Lafayette to America in his old age was hailed as such a happy event by the American public that this particular design was most popular — so much so that whole dinner sets were made. As a result, examples are not too hard for the collector to find today. The potters who made it were the important firm of James and Ralph Clews who were working in Cobridge, a part of Burslem, from 1819 to 1836. The border which consists of clusters of large and small flowers was a characteristic design in their pottery.

The scene itself was reproduced from a drawing executed by Samuel Maverick, a New York engraver. The two three-masted ships shown are the Robert Fulton and the Chancellor Livingston. Castle Garden is shown connected by a foot bridge to the mainland, a detail that has since disappeared of course.

Clews was only one of many Staffordshire potters who produced American historical china. Others were Enoch Wood, John and William Ridgway, Ralph Stevenson, William Adams & Sons, and so forth.