Flashback: The Animal Motif in Buttons

This article notes the evolution of buttons from crudely-made items using bones to fashionable and elaborate 16th-century accessories to sporting and story buttons, popular in the 18th and 19th centuries. Using the images provided, it describes buttons with animal motifs that are both common and scarce. It originally appeared in the May 1943 issue of American Collector magazine, a publication which ran from 1933-1948 and served antique collectors and dealers.

The ancestor of the modern button was a crude object, carved by prehistoric man from one of the bones of his kill and probably used as the fastening for his garment of animal skin. With the discovery of bronze, buttons and studs also appeared in that material. But though buttons thus antedated civilization and were known and used by the ancient world to some extent, they did not come into their own until the 16th Century.

Then it was that richly embroidered silk and gold buttons set with diamonds, pearls and other jewels were worn by both men and women in the court circles of England and France. In addition, those composed of wooden molds, covered with cloth, silk or leather were also worn. By the time of the Stuart kings, extravagant use of precious buttons was the rule and it was not unusual for a single costume to bear more than ten thousand gold buttons. The collector of today may hope to see some of these examples but not to acquire them.

Button fashions in Colonial America followed those of Europe and many of the more prosperous colonists adorned themselves with highly ornamental types. Buttons of the 18th Century in both England and America included those of pewter, silver or of cloth over wooden molds. After the American Revolution, large Sheffield and copper buttons came into use. Brass buttons were first made at Birmingham, England, in 1689. This city soon became the center of the button making industry in Great Britain and in the late 18th and early 19th Centuries turned out quantities of the gilt buttons then in fashion for coats.

Pictorial buttons, some of them showing animals of various kinds, first made their appearance about the third quarter of the 18th Century and by the early years of the 19th came the many rare and beautifully made sporting buttons. These were worn by both men and women. Gamecocks, dogs and horses were depicted, and in one rare set, a cow is shown! 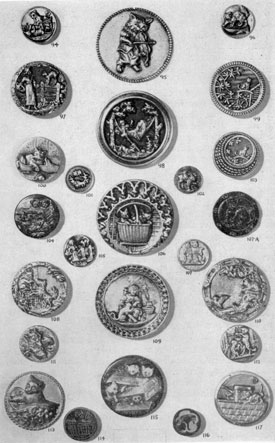 What we now term “Story Buttons” originated in France about 1870 and were copied in America, slight variations disclosing that fact. For the button collector who wants to specialize, these decorative discs of the 19th Century, depicting an animal, either as part of a scene or as the sole motif, offer a varied field. Drawn from fable or from everyday life, the designs present enough slight variations so that collecting them is a source of endless fascination.

Take cats, for instance. And in discussing them, I shall refer for the sake of clarity to the permanent serial numbers assigned to examples shown in my Button Hand Book. Illustration I displays an assortment of cat buttons, none of which is common and many quite rare. Among the latter are numbers 119 and 122, the first showing the swashbuckling “Puss in Boots” promising the farmer that he will catch the rat, and the second depicting the triumphant cat with hand on sword, holding the rat aloft for all to see.

Three different designs of the fable of the “Kitty and Lizard” are to be found in numbers 123, 124 and 129. These appeared during the 1890’s and are of brass. A particularly interesting one is the “Cat and the Mirror” (Prince Kropotkin’s Cat), number 126. It is of brass with an intriguing bit of polished steel for the mirror and an actual opening for the window. Glass is used for some of these buttons, as for example the lovely “Ginger Kitty” button, number 121, which is of crystal with painted head inside and mounted in silver. This button is of French origin.

Incidents from once popular tales are shown by number 120, “Life of a Sparrow” and number 125, “Cat and Rabbit.” A button which may take its motif from the Chinese tiger fable is number 130. It is of brass and shows an Oriental looking cat in the act of catching a butterfly. A spray of foliage above completes the decoration. Number 128 has a similar motif and is of pewter. The cat’s known fondness for perching on high or unusual spots is shown in numbers 127, 131, and 134. In the first it is perched on the roof of a dog house with beige colored house in the back ground. This is a rare button made of composition. The button showing a cat curled up on the vine-clad window ledge is of brass and scarce, as is also the large brass one on black background depicting a cat on the top of a ventilator on a roof.

Genre subjects, nursery rhymes and scenes from well known stories are depicted in Illustration II. Number 94, showing two kittens playing with a basket, is of beautifully fabricated brass superimposed on pearl. A brass button depicting the nursery rhyme “Hey Diddle Diddle” (number 95) is a most desirable collectible as is the one directly below it (number 98) which is of pierced brass on black background. It shows a homey Victorian scene of a young woman reclining in a hammock and using her parasol to play with a cat and ball on the ground. Not rare but quite handsome is number 106. Composed of a crescent of brass on mirror background, it shows two kittens in a wicker basket. Very scarce is number 109 showing a child asleep in a chair while his cat reaches up to attract his attention. This is believed to illustrate a scene from “Dick Whittington and His Cat.” Two favorite household pets are shown on a rare two-piece brass button (number 108). Here a cat sits in a coy attitude on a window ledge while a dog springs up to investigate. 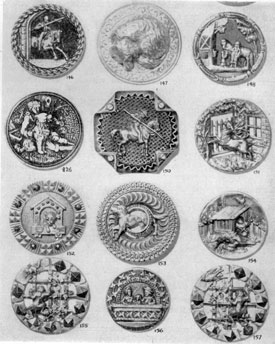 Roosters are among the scarcer decorative motifs on buttons. Illustration III shows a collection of French and American origin, mostly of brass. Number 838 has a rooster pecking at a bunch of grapes; number 844 illustrates the tale of “The Cock that Crowed in the Morn,” a gorgeous red fellow perched on a sheaf of wheat. Number 841, marked “Chanticleer” shows a handsome rooster in low relief on convex plain brass; number 842 is of Maude Adams as Chanticleer in Rostand’s play. It is of pressed brass and not unlike some of the present day costume jewelry. The button directly below it (number 846) is a beautiful “basse-taille” French enamel in vivid colors showing a crowing rooster greeting the rising sun. A small but unique button is number 843 depicting a rooster’s head with a red glass cherry in its beak.

There appears to have been a pronounced vogue in the 1890’s for showing dogs in dog houses and many of the buttons of the period adhere to that theme. Two examples of this appear in Illustration IV, numbers 152 and 154. The latter not only has plenty of action but the added motif of the rooster on the roof of the kennel. This button is a two-piece pressed brass one. In between these two is a very unusual button (number 153) showing a hound stepping through a hoop composed of cut steel beads loosely strung on a wire, a fragile arrangement to have withstood the years. I have given the name “Watching the Parade” to number 156 as it shows two children on a balcony with a dog between them. The dog is omitted from smaller buttons of the same design.

Buttons with designs of monkeys are rare but numbers 155 and 157 are handsome examples of such a motif. They both show a monkey climbing a vine covered trellis. In one case he is in pursuit of a cat; in the other, a bird. Both buttons have large steels in border. With buttons depicting horses, the action is almost as vivid as in a sporting print. Examples of this are numbers 145, 146 and 15o. Still another interesting button is number 151 which has the figure of a stag in high relief, superimposed; he is shown at the identical gate from which, in another button, Punchinello is seen emerging.

These are but a few of the many odd and delightful designs that use an animal motif. Rare as are many of the buttons, the field seems practically unlimited.

ButtonsAs long as human beings have needed to keep their clothing fastened, button…