The Best View from Coit Tower? Try the Murals

We visit Coit Tower and learn there’s plenty to see at the base.

Taking a trip to San Francisco? You’ll probably be told to ride a cable car, walk across the Golden Gate Bridge, drive down Lombard Street, and, of course, catch the view from Coit Tower. 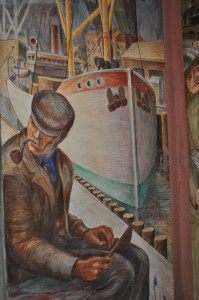 I went to Coit Tower on Friday—it was my second trip to the monument atop Telegraph Hill overlooking the City by the Bay—and it was interesting; though what I found to be the highlights are probably not what most people go there for. The murals and the history are the best parts of the monument. The view from the top? Fairly pedestrian. After all, a lot of times the view is blurred by a layer of San Francisco fog. Furthermore, the views from Pioneer Park, at the tower’s base, are hardly worse than those from the summit—save your money and don’t waste your time waiting in line.

My trip was hardly a failure, however. After all, the inner base of the monument is covered in wonderful murals (mainly frescos) painted by artists from the  California School of Fine Arts. Like the murals at the Rincon Center, which I blogged about recently, these murals were painted as part of the New Deal. Unlike the Rincon Murals, however, these were a product of the Public Works of Art Project (PWAP), and were completed in 1934, just a year after construction on the Tower was finished.

The Coit Tower murals focus on scenes throughout San Francisco, and while the the descriptions of the paintings often leave something to be desired, the artistry cannot be questioned. And you can see even more murals by signing up for a Saturday tour. That said, if I had to choose between the murals at the Rincon Center or the murals at Coit Tower, it’d be awfully difficult to say no to Rincon. 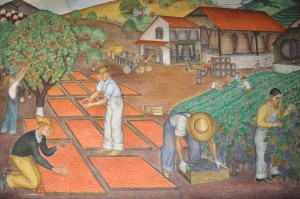 But the story behind Coit Tower is a pretty cool one. The benefactor of the tower, Lillie Hitchcock Coit, was a volunteer with the Knickerbocker No. 5 Engine Co. in San Francisco in the late-19th century. In her younger days, Hitchcock Coit helped rally the firefighters up Telegraph Hill to battle a blaze, and from then on she was an honorary member and huge supporter of the brigade.

Hitchcock Coit was also extremely wealthy and had a love for San Francisco, so before her passing in 1929, she left a large sum of money to build something to “beautify” the city. Out of that came Coit Tower, which also stands as a monument to the city’s firefighters. Some say that the tower looks like the nozzle of a fire hose (others say it is obviously phallic) but architects Arthur Brown Jr. and Henry Howard probably did not see it as either. Coit Tower was completed in 1933 and for those interested in firefighting and its history, it is definitely a site to be seen while in the Bay Area.

To see my photos of the Coit Tower murals, go here, here, and here.