The Dead Files: Rock Art, Artifacts, and Psychedelic Office Supplies Up for Grabs 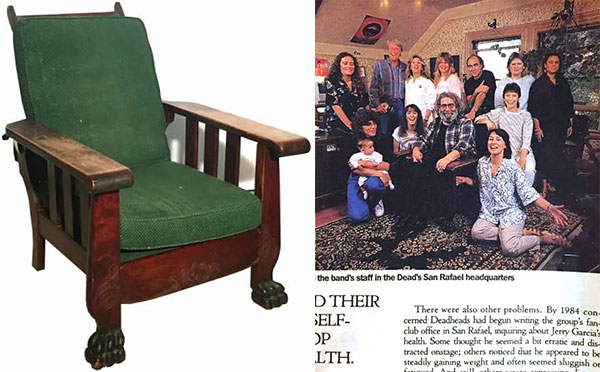 When people ask me where I went to high school, I often tell them Winterland, the former Ice Follies arena in San Francisco where, from 1966 to 1978, legendary rock impresario Bill Graham produced concerts headlined by everyone from Jimi Hendrix to the Sex Pistols. My friends and I spent many an evening (and early morning) in that gloriously decrepit firetrap, but, in fact, I am a proud graduate of San Rafael High School, class of 1973, home of the fighting Bulldogs and 420.

In 1970, our favorite band, the Grateful Dead, moved to my hometown, setting up an office in a two-story, palm-fronted, wood-frame residence at 1016 Lincoln Avenue. Suddenly, our musical heroes were in our midst, giving sleepy San Rafael instant hippie cred. We probably walked or rode our bikes past that building a thousand times, never once thinking to ask for a peek inside. That would have been so uncool. 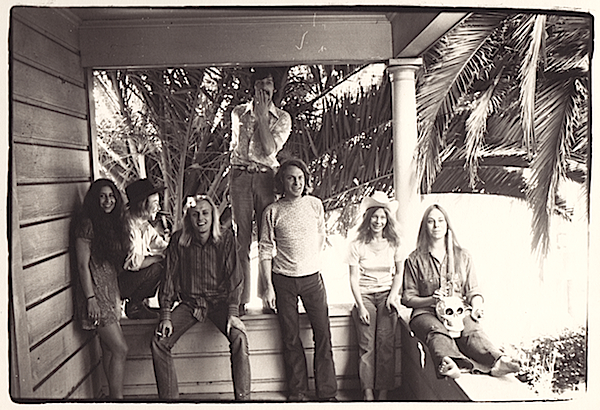 On April 11 and 12, 2015, people like me can finally see some of the relics that once filled 1016 Lincoln when Donley Auctions of Chicago puts more than 700 Grateful Dead items up for sale in its Grateful Dead Family Jubilee. The Chicago auction is something of a prelude to the upcoming shows this July in the city’s Soldier Field, where the band gave its last concert in 1995 and where surviving members of the Grateful Dead—with Trey Anastasio of Phish sitting in for Jerry Garcia on lead guitar—will perform three “Fare Thee Well” concerts. Tickets for those gigs are long-since sold out, but online bidding for the auction items is open, and includes artwork by Stanley Mouse, Rick Griffin, and Gary Houston; unused stage passes and tickets; and loads of office ephemera, from business licenses to stationery.

The Soto List (left) was the source document for what became Deadbase, which catalogs all of the Grateful’s Dead’s 2,000-plus concerts, from venues to setlists. (Click to enlarge.)

Dennis McNally spent a fair amount of time in that office over the course of almost two decades (although not during the years when I was attending high school a few blocks away), mostly as the band’s publicist but also as its historian—his 2003 “A Long Strange Trip: The Inside History of the Grateful Dead” is considered a must-read among Deadheads. He corroborates my sense that people pretty much left the band alone: “The number of fans,” he says, “who knocked on the front door and asked ‘Is Jerry here?’ was incredibly rare.” And while real estate was not the focus of McNally’s work, he does have a few stories about 1016 Lincoln.

“The first time I went there,” he told me over the phone the other day, “I knocked on the front door. That proved I was a stranger because, of course, nobody used the front door. Everybody came in through the back, through the kitchen. That’s why the object in the auction I’m probably most sentimental about is the kitchen table. I never kept a formal office at 1016 Lincoln, but when I did come in, two or three days a week, I would work in this little office off the kitchen. The kitchen table was in my line of sight, and in the morning, you’d watch band members cruise in, pick up their mail, have a cup of coffee, bullshit with each other, and then go upstairs to take care of whatever business they were there to take care of.” 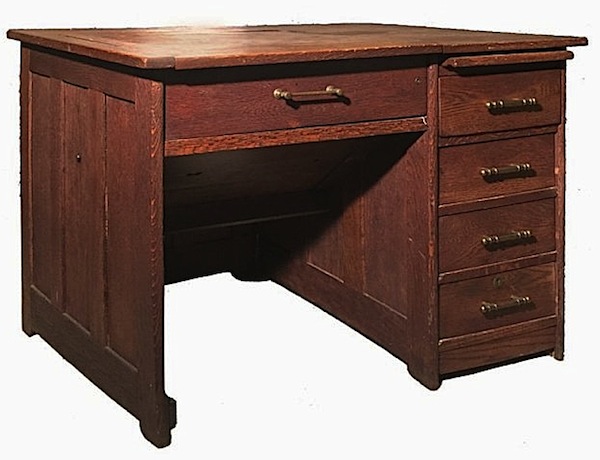 This wooden desk sat in the band room of the Grateful Dead’s Lincoln Avenue office from 1974 until the band vacated the building in 2000.

One of the band’s earliest attempts to chronicle its storied history is among the auction items. “As part of the process of becoming the Dead’s biographer,” McNally writes in the auction catalog, “I told [band manager] Rock Scully that I wanted to put together a list of all Dead concerts. He said sure, and gave me something that had been assembled by an office staff member, Janet Soto, which came from the contracts file. But it only went back to 1970, because Lenny Hart [drummer Mickey Hart’s father], who had departed with the treasury early that year, also took files with him. It also lacked the Bill Graham shows—they didn’t do regular contracts with him. So I set to work adding in earlier known shows and the Bill Graham stuff, and that’s the illiterate scribbles on the list Janet gave me—and which I returned when I started typing up a clean copy. This list marks the seed of what would later blossom into the stunning complexity of Deadbase.” 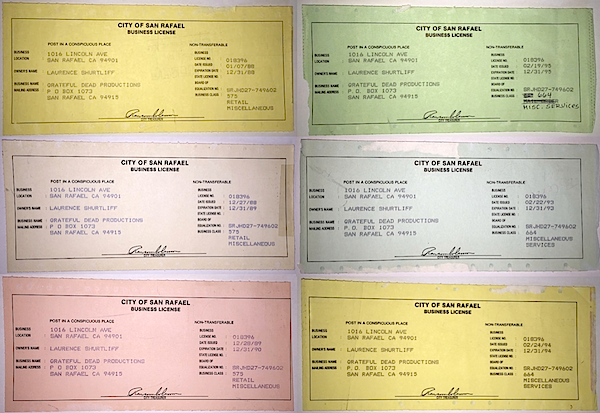 These business licenses, from 1988 to 1995, all bear the name of Laurence Shurtliff, which was the real name of the president of Grateful Dead Productions, whom everyone knew as Ram Rod.

McNally says that tracking down all the details associated with each of the band’s more than 2,000 performances from 1965 to 1995 was no easy task in the days before searching for just about anything on the Web was taken for granted. At first, he went to U.C. Berkeley, assuming the university’s renowned Doe Memorial Library would have all the nation’s newspapers on microfilm. Newspapers might be a good place to find listings for obscure shows or last-minute bookings, the sorts of gigs that could easily get lost in the shuffle of disorganization that characterized the early years of the Grateful Dead. Or so he thought.

“I just couldn’t believe it,” he says today, “that U.C. Berkeley didn’t have major papers like the ‘Chicago Tribune’ on microfilm. So I would call up a Chicago Deadhead and say, ‘I need you to go to your library and look up such-and-such date. We’ve got a gap between two shows in Minneapolis and Cincinnati. I’ll bet you they went to Chicago, too.’ We had a whole national network of Deadheads looking up Grateful Dead data.” If the Soto document was the seed, McNally was one of its many attentive gardeners. 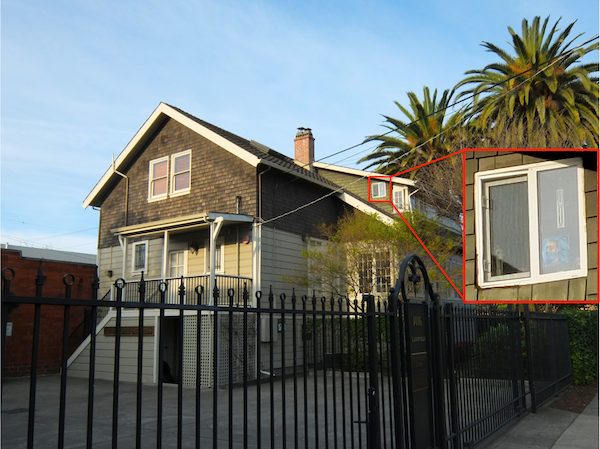 The view today of 1016 Lincoln Avenue, from the back entrance that everyone who worked in the building used. The inset at right shows a portrait of Jerry Garcia in the upstairs window.

During the mid-1970s, the band went on a year-and-a-half hiatus, but its fan base kept growing, exploding in 1987 when “In the Dark,” its only top-10 album, was released. By that point, if not well before, the Dead could have easily afforded to purchase 1016 Lincoln, but their landlord was happy to have them as tenants. “They kept trying to buy it,” McNally says, “but the guy wouldn’t sell. He loved us as tenants, but for whatever reason he wouldn’t sell. It was kind of ridiculous.”

Somehow, though, the plain building worked well for the Grateful Dead, which eventually grew into an organization whose scale resembled that of a traveling circus. “Lincoln was a block from the downtown of this all-American small town. It was just an office that happened to be in a house. And it was very comfortable. Around the middle of the 1980s, we crept across Fifth Street into a second building on Lincoln. Our in-house travel agency was downstairs, and eventually, we took over the upstairs, too, and that’s where the tickets were sorted and mailed. But 1016 Lincoln is what every person who ever worked for the Grateful Dead thinks of when you say ‘Grateful Dead office.’ It was kind of our home.” 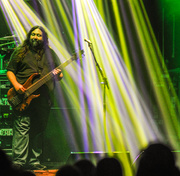