The Force of Star Wars Comics

Today’s guest blogger is comics collector Paul Moore, a.k.a. Frosty21. He lives in Clearwater, Florida, but you can find him any time on Show & Tell. 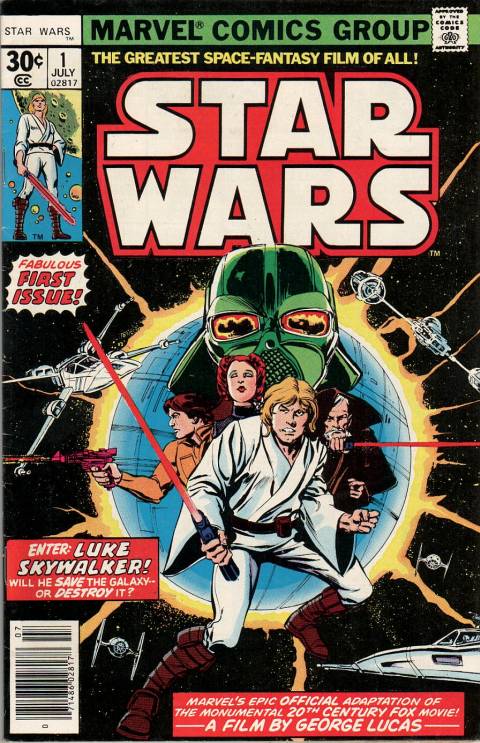 I started collecting comics when I was 16 years old. It was 1977, and the “Star Wars” movie had just come out. I went to see it at the theater, and it blew me away. On my way home, I stopped at the local newsstand in town, in Glens Falls, New York. I was just looking to get some candy, but I saw a comic book with Star Wars on the cover. Well, I put my money down and started to read. The comic was as good as the movie—the story grabbed me. It changed me.

As time went by, I started to buy more comics. The man at the newsstand said he knew a shop that had some old comics. Mr. Brown, who ran the shop and was a very nice man, sold coins along with some odds and ends. He kept his old comics in cardboard boxes, not in the nice storage boxes stores have now. I felt so much joy seeing those old boxes. He told me to go ahead and look through them. That’s where I discovered Thor and Captain America. Wow!

At that moment, I fell in love with the art of Jack Kirby, especially his stuff in New Gods, Mighty Thor, and Captain America. Here’s what I know about Jack Kirby: He was born in New York, New York, on August 28, 1917. He served in World War II, and after the war he worked for major comics companies such as Timely, Marvel, and DC. Thanks to his fantastic art and storytelling, he won a Shazam Award for Special Achievement by an Individual, was inducted into the Shazam Awards Hall of Fame, and was the first inductee into the Will Eisner Comic Book Hall of Fame.

From then on I was hooked on comics and collecting. I love to find an old gem, but now and then a crazy cover or something about a comic just catches my eye. So I’ll buy it and put it in my collection box. I like to read ’em and dream. All thanks to that fateful day when I went to see that “little” space movie.

Jack KirbyBorn on August 28, 1917, Jack Kirby taught himself to draw when he was a yo…