The Hepburn Dress That Keeps on Giving

In this article, we consider what Audrey Hepburn’s little black dress is really worth.

I recently had the pleasure of updating our Audrey Hepburn overview, which probably took me longer than most, mainly because every time I saw a picture of her I would inevitably have to wipe my drool off the keyboard. Once I was able to get past her everlasting beauty (who am I kidding, I never got past that), I was amazed at some of the things I learned. 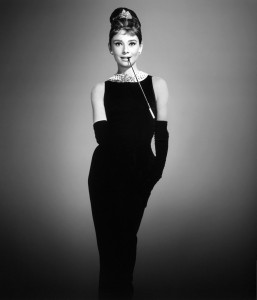 As you may have noticed, I’m one of the newer contributors to the Collectors Weekly blog. If you read my posts, you will probably find that many of them are variations of, “Holy $&%#, somebody really paid that much for that item!” I guess you could say I’m excitable.

So in addition to the excitement elicited by the mere sight of Hepburn, I was also astonished to find out that the little black dress she wore as Holly Golightly in “Breakfast at Tiffany’s” sold at auction in 2006 for £410,000! At the time, that was equivalent to approximately $806,000.

1. You could fly from New York to London—where the auction was held at Christie’s—and back 1,000 times.
2. You could buy 723 little black dresses designed by Hubert de Givenchy, the designer that made the Hepburn dress from “Breakfast at Tiffany’s.” If you wanted, you could choose a less-expensive Givenchy and have yourself about 1,300 of them.
3. You could buy 76,852 copies of the movie, “Breakfast at Tiffany’s” and 70,163 copies of the book version.
4. You could order 124,028 omelets with homefries, toast, and jelly at Tiffany’s, a diner in Philadelphia.

I think you get my point. It’s a truckload of money. More money than many people see in their lifetimes, and somebody spent that much on a dress they will almost certainly never wear.

To put it in even more perspective, the only dress that comes close to matching Hepburn’s “Breakfast at Tiffany’s” get-up was the blue-and-white frock worn by Judy Garland as Dorothy in “The Wizard of Oz.” It sold for £140,000, about a third of what Hepburn’s cost. A bargain. 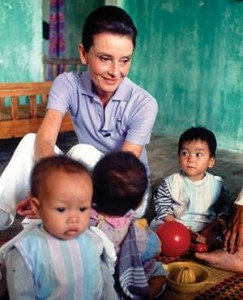 In the opening paragraph of the Hepburn overview, I hypothesized about why Hepburn memorabilia is so collectible. Sure her movies were great, but her career was brief. Yes, as I think I’ve made clear, she was beautiful, so much so that I had a professor this past year at Stanford dedicate an entire lecture to her beguiling looks. I can’t remember the point he was trying to make, I just remember Audrey.

While those are both good reasons for collectors to clamor for anything she touched, maybe the real reason is this: Audrey Hepburn was dedicated to charity. She was a goodwill ambassador for UNICEF and traveled to all corners of the globe trying to help impoverished children. Turkey, Vietnam, Honduras, Bangladesh, El Salvador, Guatemala, Venezuela, Somalia, and Ecuador were all places Hepburn stopped to stump for clean water, immunization, and education.

So I probably should have assumed all along that the $806,000 raised by the sale of the world’s most famous little black dress went to charity. To be more specific, the fibers in that dress were turned into bricks, wood, and mortar used to build schools in Calcutta, India.

How could I have expected anything different from a Hepburn-related sale? After all, this is the same woman whose son wouldn’t allow the German government to print stamps with her picture on them because the image used showed her with a cigarette. That may have been the image that made her famous, but her family understood it would not have been one she would have wanted to perpetuate, especially to children.

What didn’t Audrey Hepburn do right? From what I can tell, very little.