Flashback: The Metal Flask, Successor to the Powder Horn

This article describes the spread of powder flasks from England to America in the 1800s and notes some of the major manufacturers, the varying sizes, designs, and materials, and the best way to care for your antique powder flasks. It originally appeared in the November 1937 issue of American Collector magazine, a publication which ran from 1933-1948 and served antique collectors and dealers.

When I was a boy in my teens, I well remember the first time I went hunting. Along with a breech loading gun I carried a leather flask for shot and a copper powder flask. The latter was embossed on one side with a hunting dog and had a beautiful blue carrying cord with tassels on both sides where it went through the lower rings of the flask. 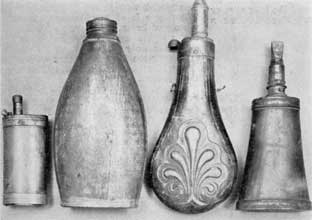 Plate I – Four Distinct Types: Left to right, there are brass combination container with compartments for powder, percussion caps, bullets, and bird shot; tin flask with screw-top, probably used as shipping container; an English flask of zinc; and a transitional flask with metal ends set into a section of cow's horn.

This interesting accessory really belonged, of course, to the era of the percussion cap, muzzle loading firearm which ended with the Civil War period; but in all pursuits there are always a few who are slow to abandon old ways and methods.

Even today, one occasionally finds an old hunter stubbornly clinging to his muzzle loading gun and the accompanying powder flask. On this occasion, then, the beauty of the flasks I carried made such a lasting impression on me that I later started collecting them. That was 30 years ago. I kept no record of the first hundred but on sorting them found only four duplicates. At present I have some 200 flasks practically all of differing design and size. Like all other collectibles they are interesting not only for their variety of shape and design but as reminders of the era when they were used on battle and hunting fields alike.

They were successors of the powder containers made of cattle horns which accompanied the earlier flintlock guns. One finds the Napoleonic Army first using these metal powder flasks between 1800 and 1810. Soon afterward, English firms began to produce them and there is no doubt that the earliest ones used in America were imported from England. Even in 1830, when various American firms began producing them, it is more than probable that English workmen were employed for making the first ones at least. One of the firms, Capswell Horseshoe Nail Company of Woodbury, Conn., definitely employed English workmen. 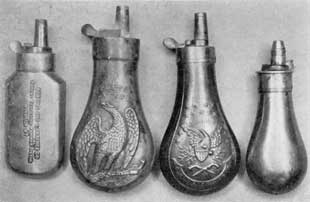 Except for a few sport magazines and directories, there appear to have been few advertisements for the sale of these powder flasks and only a small percentage has the maker’s name on them. When they do, it is usually stamped on top of the charger; but with both English and American specimens, a few will be found with the mark on the flask itself.

American makers included the American Flask & Cap Company which was later absorbed into the Waterbury Brass Co. They marked their flasks as did Samuel Colt of Hartford, Conn., Robbins and Lawrence Company of Windsor, Vt., and the Capswell Horseshoe Nail Co. who are still making horseshoe nails at Hartford.

An example of the modest advertising done by these firms is found in the Vermont directory of 1856 wherein Robbins and Lawrence announce that they “have enlarged their establishment and are doing an immense business in the manufacture of rifles and pistols.” Of Dingee, a New York manufacturer, the City Directory of 1849-50 simply lists, “Robert Dingee, equipments, 56 Frankfort St.” Under it “Henry A. Dingee, equipments, 56, Frankfort St.”

Most of these flasks were made of copper with a brass top or charger, in many cases adjustable to four different sizes of powder charge, 2, 2 1/4, 2 1/2, and 3 drams (this of course was for black powder). 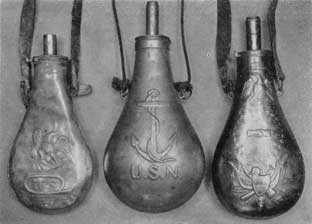 Plate III – Three American Military Flasks: At the left, U. S. Army regulation issue; center, a U. S. Navy flask, used for the priming charge for a cannon; and right, flask marked "US" on the shield superimposed on a stand of crossed flags and arms. Above, within a circle of 26 stars are two clasped hands and below the neck, an eagle with wings spread, shield of stars and stripes on its breast.

Flasks made for rifles or for priming cannon had no adjustable charger. Other rarely used materials for making flasks were brass, tin, zinc, sheet iron, and paper fiber. I have just one of the latter. It is eight inches long, four and one-half inches wide, and one and one-half inches through. It has two loops on each side for the carrying cord, has a graduated charger, and was made by Crary Renham and Company. It is very light and perfectly plain on both sides.

The earliest flasks were perfectly plain. Then came the embossed design. Many will be found embossed on both sides; some on one side only. The rarest are those embossed with Indian and deer, etc. American specialties are western scenes, particularly one of Indian hunting buffalo, which gives evidences of being copied from a Catlin print. There are also designs featuring hunters with dogs. With some the hunters wear a high hat and are obviously English. A large percentage of flasks is decorated with a geometric design.

Metal flasks became part of the standard equipment for both Army and Navy about 1840 but there seems to have been no standard design other than U.S.N and the anchor for the Navy and the eagle and U.S. for the Army.

When powder horns were in use they were accompanied by a “buckskin bag for buckshot.” This also held for their successors. Sold in pairs and usually of the same size and design were a metal flask and one of leather. The latter was for carrying shot and the reason for it is obvious. If shot were carried in a metal flask it would rattle and scare the game.

Sometimes one finds a metal flask covered with leather but these are apparently not common: I have only three in my collection. One is a pistol flask unmarked; the second bears on its brass charger “extra quality Sykes patented.” The charger is graduated in sizes, 2 1/4, 2 1/2, 2 3/4, and 3 drams. The third flask, made by the American Flask and Cap Company, has a charger graduated in the four sizes, 2, 2 1/4, 2 1/2 and 2 3/4 drams.

It is hard to find a good specimen of zinc flask because of the chemical reaction between the zinc and the gunpowder. The result is a definite corrosion which in some cases practically destroys the flask. This undoubtedly accounts for the material being rarely used.

Among those of copper I have a unique specimen acquired only recently. It has a brass top made in the shape of a gun stock embossed like the carving on a regular stock. It is eight and one-half inches long, three and one-quarter inches wide, and has a pair of loops on each side for the carrying cord. The charger is adjustable. This flask was made by Frary Benham and Company. 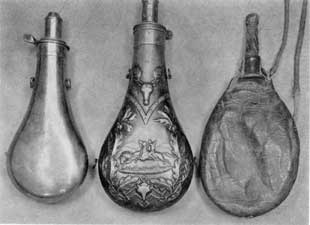 Plate IV – Three Contrasting Types: Left, the earliest type, no decoration or maker's mark; center, a sportsman's flask with central scene showing an Indian buffalo hunting; right a homemade shot pouch of leather with horn nipple and cap. Shot carried in a metal flask might rattle and warn the game being hunted.

Fifty years or a little more cover the period that these metal powder flasks were in general use and favor. During that time they were made by the thousands and in sizes ranging from those proper for priming cannon to those that went with the small vest-pocket or muff pistols. Since their manufacture stopped it is surprising how they have disappeared. But no one thinks of saving things until they become scarce and only then when collectors begin to hunt for them.

Many of those found today are in very good condition because they were originally lacquered and this, of course, preserved them. If they are not corroded all they need is to be treated with a good grade of oil and then wiped off. Spots of erosion or of vertigries should be removed first with a little steel wool moistened with oil. Rub lightly with this until the spots disappear, then treat the whole with oil as already described.

Under this care they soon develop a good antique copper color which I much prefer to the complete face lifting sometimes administered to old flasks in the name of restoration. I recently saw two that had been thus cleaned, burnished and relacquered. They were still old, of course, but they didn’t look it. One of the greatest assets of the antique, the mellow bloom of age, had been destroyed.

These old flasks were made in two pieces, stamped out and then braised together. Some have two rings and some have four for the carrying cord. Before metal powder flasks came into general use, there was a transitional stage of horn with two metal ends. An example of this is shown in plate one, number four.

In the same illustration is an unusual pistol flask. It is made of copper with brass ends and has three partitions, one for powder, one for caps, and one for lead bullets. A tin flask for storing powder is also shown.

Plate II shows three pistol flasks, with one loading charger. They are made of copper with a brass top. Number one is made by Robbins and Lawrence Company of Winston, Vermont; number two, by Colt and Company; number three, same company; number four, no name. 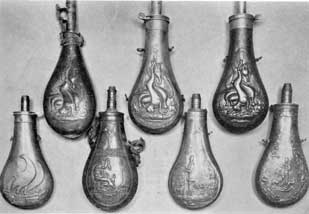 Plate IV, number one, is a copper flask, perfectly plain on both sides. Number two, beautifully embossed, is one of the rare ones, Indian hunting buffaloes. It is made of copper with a brass charger. Number three is a homemade flask of leather.

Plate V, numbers one, two and three, are made by James Dixon and Son of Sheffield. Exact copies were later produced by the American Flask & Cap Company. Number one is a leather flask that went with number two or three. Number four may have been used by the army; number five is a Greek design; numbers six and seven are old English flasks with hunters with high hats and their dogs.

When I first started to collect these, many could be bought for a quarter but a good specimen today brings almost as many dollars. It is especially interesting to find a pair of embossed matching flasks, one of metal, the other of leather. 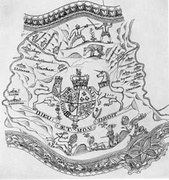 FlasksWhile flasks have had a variety of uses over the years, such as the storing…