The Milky Way: Back in the Day, Milk Cans Delivered Dairy From Cow to Consumer 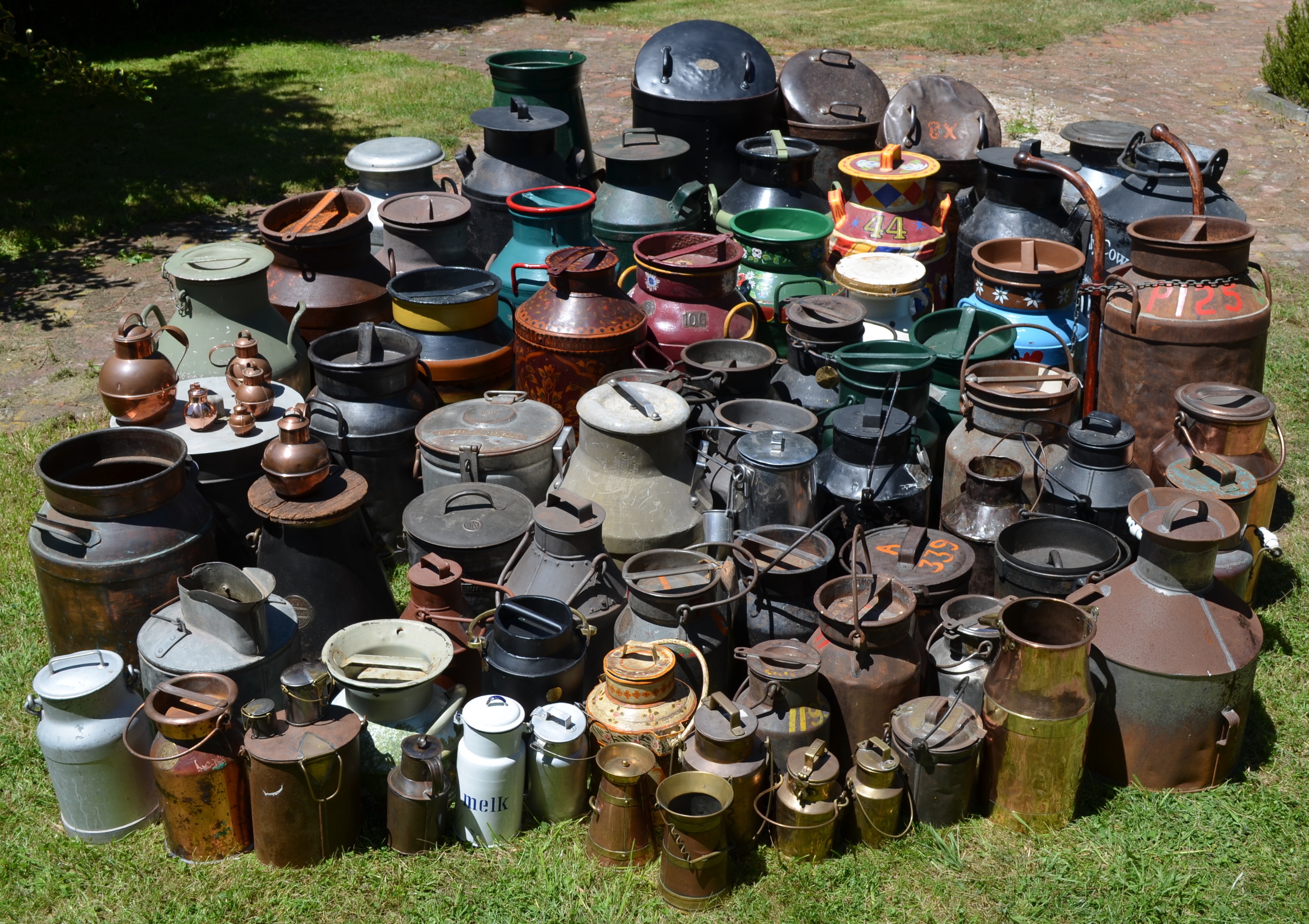 A portion of Ian Spellerberg’s collection of milk cans. Photo via Milk Cans.

Lots of people collect milk bottles, even more collect milk glass, and among the legions who collect vintage signs, there’s an enthusiastic subset of individuals who gravitate to anything made of porcelain or tin bearing the name of a local dairy or the cartoon likeness of that supreme milk mascot, Elsie the Cow.

“Milkmaids carried more than 100 pounds around their necks, several miles, every day.”

Ian Spellerberg is not one of those people, but he is seriously interested in antique and vintage dairy artifacts. He collects milk cans, which are the containers used to transport small quantities of fresh milk from cow to consumer in the days before milk was produced at industrial scale, pumped into gleaming, refrigerated, stainless-steel tankers thousands of gallons at a time.

“I am on a mission to celebrate the milk can,” Spellerberg tells me in an email from Christchurch, New Zealand, where he was a professor of nature conservation at Lincoln University for 20 years. His 2018 book, Milk Cans: A Celebration of Their History, Use, and Design, which has just been published in the United States by Astragal Press, an imprint of Globe Pequot, Division of Rowman & Littlefield, is the realization of that singular mission. “I am quite sure that I have the largest private collection of milk cans—250 from 20 different countries—in the world,” he adds. 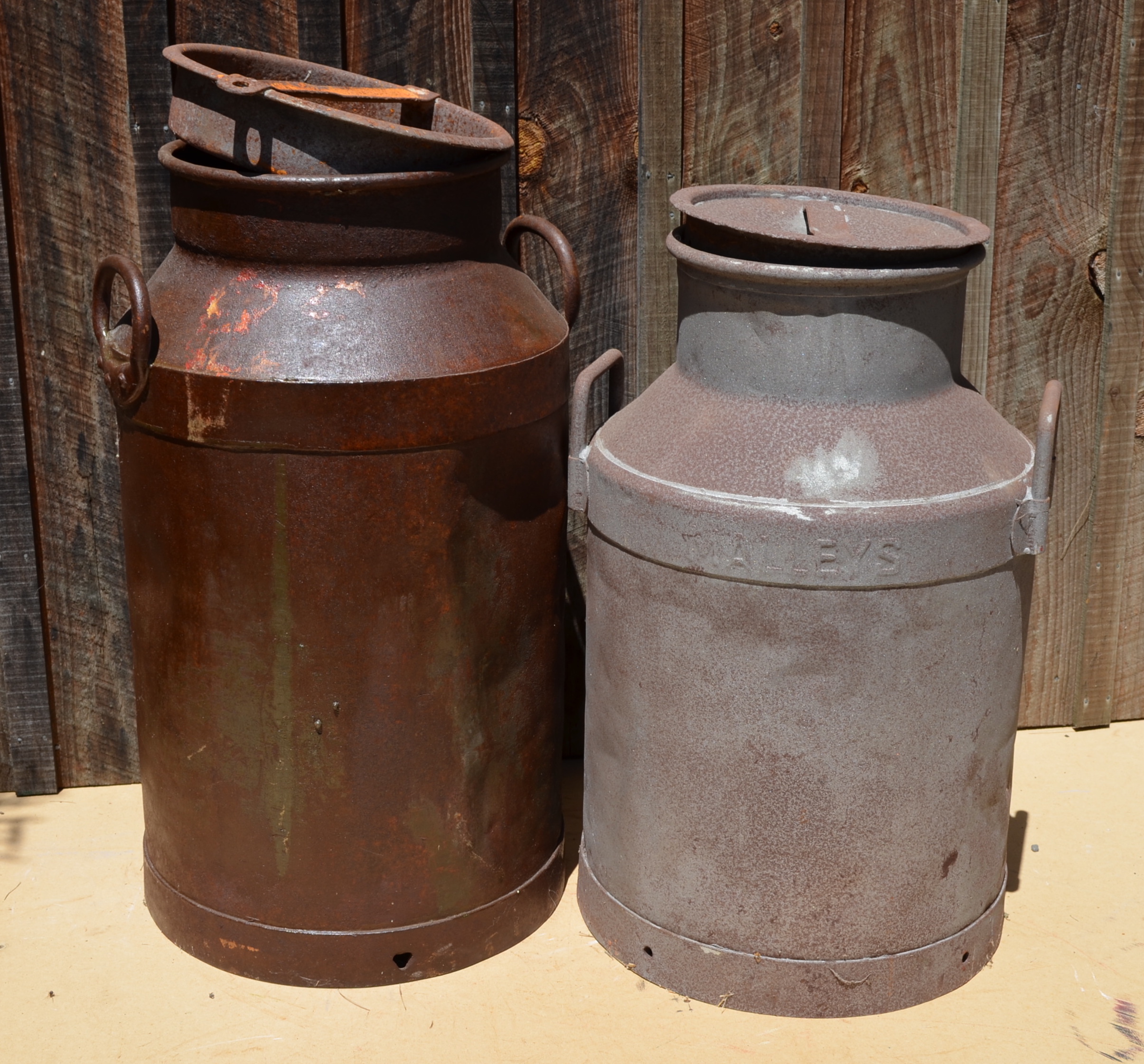 The milk can on the right is the first one in Spellerberg’s collection. The one on the left was purchased at a farm auction in New Zealand. Photo via Ian Spellerberg.

So far, no one has stepped up to challenge this bold assertion, and it’s unlikely anyone ever will. Spellerberg, you see, is no stranger to arcane collecting passions. In addition to Milk Cans, he’s written books on his collections of page turners and matchsafes. No boring binders full of baseball cards or comic books for this guy.

Spellerberg’s first encounter with milk cans occurred at age 10, when his family began making regular visits to his uncle Frank’s farm in Oxford, just a few miles inland from Christchurch. “It was a small spread,” Spellerberg says, “with mixed farming, about 15 cows, and some sheep. We all had a go at milking,” he adds. “As a 10-year-old, I drank milk straight from the cow.” 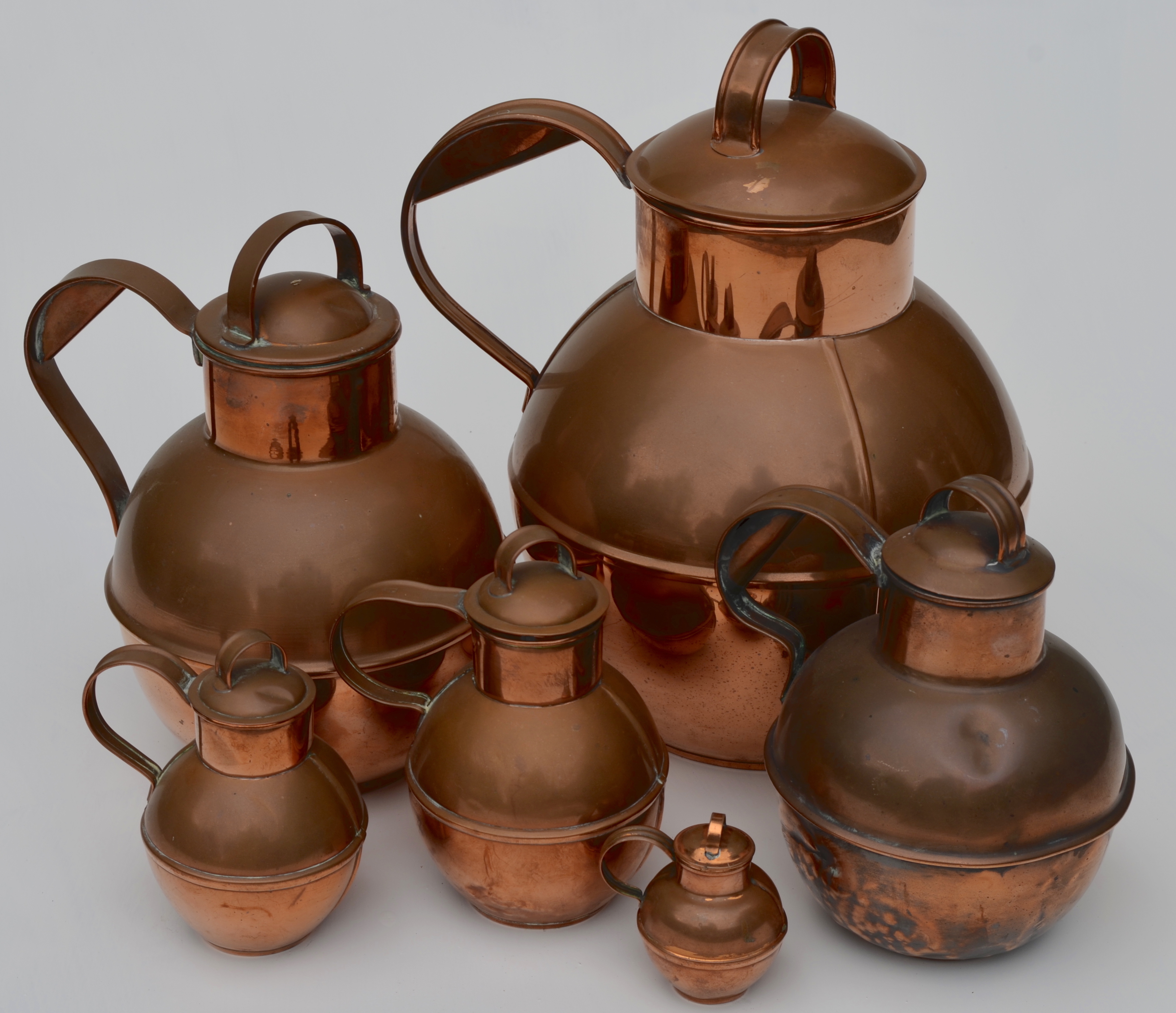 Guernsey milk cans such as these are made of copper that’s been tinned on the inside. Photo via Milk Cans.

As is often the case with early life experiences, Spellerberg’s trips to his uncle’s farm during the 1950s and ’60s stuck with him. Decades later, in 1994, having returned from a stint teaching in England, Spellerberg purchased what would become the first piece in his milk can collection from his late uncle Frank’s son.

In the years that followed, Spellerberg collected copper milk “jugs” made on the island of Guernsey off the coast of France, brass milk “pots” from India, mass-produced wide-bottomed “railway churns” from London, cans with rain-proof “mushroom” tops, and cans with lids that locked, to make it more difficult for unscrupulous middlemen to dilute a dairy’s pure product with water.

As this composite photo makes clear, the London Dairy Supply Co. pulled out all the stops for its display at the 1895 Dairy Show. Photo via Milk Cans.

Spellerberg added to his collection of these “dairy utensils,” as cans are sometimes called in old advertisements, while traveling, but he also picked up plenty of cans in his native New Zealand. Still, that doesn’t mean the local milk cans in his collection were always the easiest to acquire.

“About 15 years ago,” Spellerberg recounts, “I heard from a retired dairy farmer who had a painted wagon full of large milk cans. I had never seen milk cans that large before. The gentleman was very nice and helpful but refused to sell, exchange, or loan me even one of his cans. He was adamant that I could not have one can until I had written a book about milk cans. I visited him many times over the years but, sadly, he passed away before my book was published. I was most upset about that. Later, his two sons let me have three of the largest cans.” 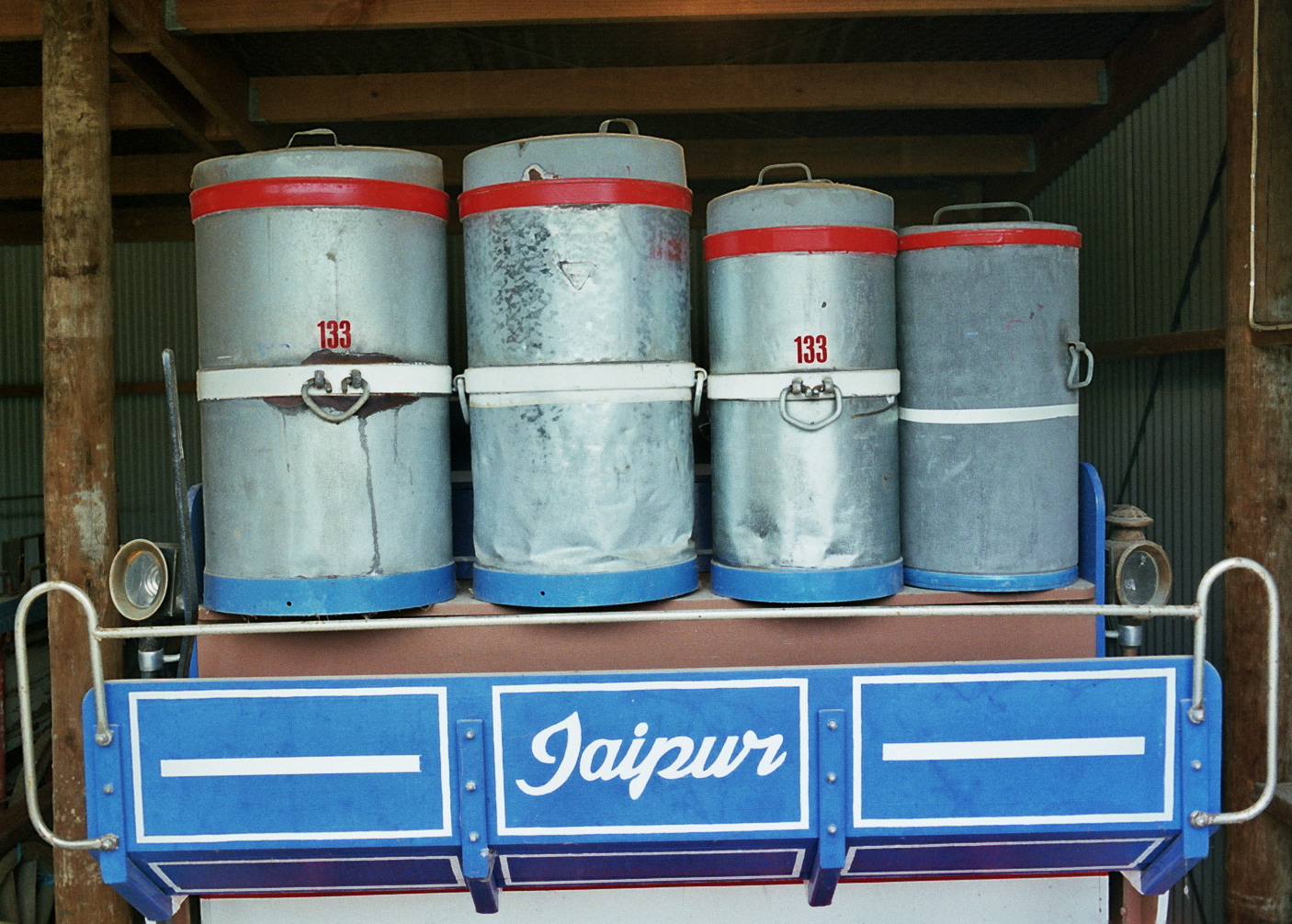 These galvanized cans are from the 1950s and were made by Hardley’s of Auckland, New Zealand. Spellerberg acquired them only recently from the family of a North Island dairy farmer. Photo via Milk Cans.

Even for those of us who have not shared Spellerberg’s childhood experience of learning to milk a cow on an uncle’s farm, or the thrill as an adult of tracking down the perfect can, Milk Cans will get you thinking about how one of the world’s most common staples has been transported from cow to table over the centuries. The book begins with a brief history of the form, going back 6,000 years to the era of ceramic jars; fragments of clay containers used for dairy products have been found at Stonehenge, while friezes from roughly the same period depict containers that look remarkably similar to the cans and churns of the last century or so. Spellerberg then moves briskly to a discussion of the metal containers of the past 1,000 years, beginning with those copper milk cans from the island of Guernsey. Like many milk cans, the ones produced on Guernsey narrowed at the top to minimize waste caused by sloshing, but Guernsey cans are also interesting for the way in which they were formed—flattened sheets of metal were hammered around the trunks of trees, just like armor was back in the day. 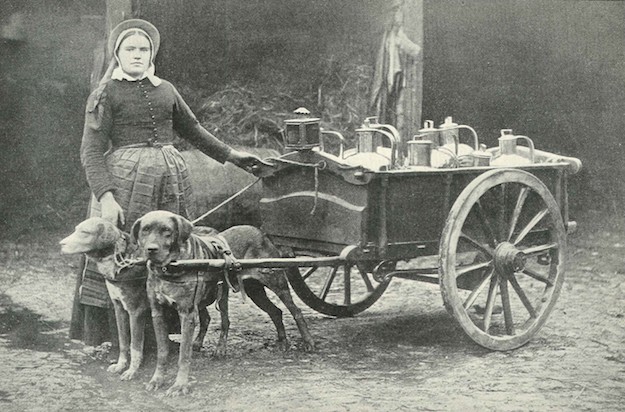 Dog-drawn milk carts like this one were a common sight in Belgium between the wars. Photo via Milk Cans.

Naturally, Spellerberg also devotes a fair amount of his book to the myriad ways in which milk cans were moved from Point A to Point B. He begins with a section on “manual” transport, beginning with the milkmaids of 18th-century England and Europe, who carried unlidded cans on the ends of yokes like beasts of burden. It’s thought that milkmaids carried more than 100 pounds around their necks, several miles, every day. By the 19th century, milkmen had largely replaced milkmaids, but concurrently, the manual transport of milk was itself being replaced by carriages, carts, and customized hand trucks, each of which was designed to hold particular styles, sizes, and shapes of milk cans so that they could be rolled easily through the streets. Sometimes these devices were pulled by humans, sometimes horses provided the literal horsepower, but there are also examples of milk-can carts being pulled by harnessed dogs.

This illustration from A Book of Farmcraft, 1942, shows how to reel a milk can. Published during World War II, it was dedicated “to our mothers.” Illustration via Milk Cans.

As the means of moving milk cans improved, the size of the cans increased, reaching peak milk can, if you will, around 1867 with the railway milk churn, which takes the last part of its name from its resemblance to traditional wooden butter churns. Railway churns were wider at the bottom to make them less susceptible to tipping over and spilling their 17 gallons of liquid, which, Spellerberg tells us in Milk Cans, is equivalent to 8 “barn” gallons or 68 quarts. However you measure it, when you add in the weight of the metal churn itself, a full railway churn weighed as much as 150 pounds. To move this milk-filled monster, dairy and railway workers alike would “reel” the churn by grabbing its top or handles and turning it on its bottom edge rather than lifting it.

By all accounts, the handling of milk cans, whether they were being loaded onto rail cars or transported around town on the back of trucks, was noisy work, capable of waking entire neighborhoods in the early morning hours, when empty cans were typically picked up and full ones delivered. Soon, entrepreneurs were filing patents that prevented milk-can handles from clanking against the sides of the cans. There were also patents for rubber gaskets or “tyres” that encircled the bases of churns, to prevent them from making so much noise when reeled. 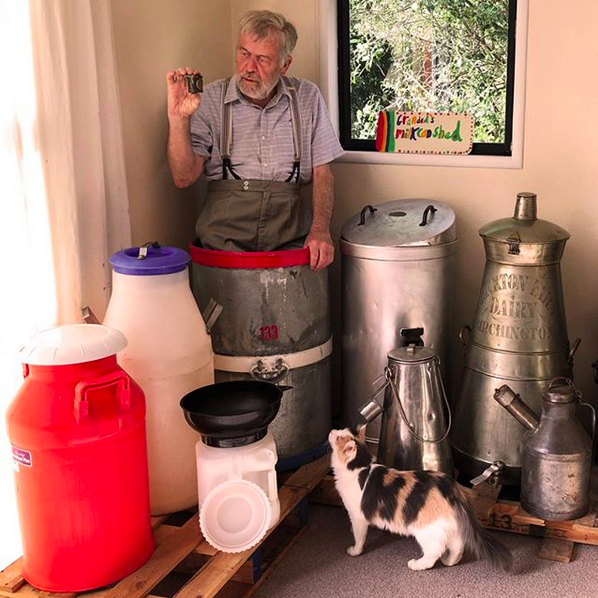 Ian Spellerberg with his cat, Florence. Spellerberg is standing in a 25-gallon can, and he’s holding a tiny example meant for just an eighth of a pint. Photo via Ian Spellerberg’s Instagram page.

In fact, patents for milk cans and various dairy accessories was a big business: In the United States, 543 milk-can-related patents were filed between 1859 and 1919. Beyond those to reduce noise, patents were filed for the designs of machines that cleaned cans, while other patents attempted to protect the design of devices that would remove dents, which reduced the amount of milk that could be carried in a can. Because they held less milk, dented cans were less profitable to use than undented ones.

This rich history of farming, invention, commerce, and design helps explain why milk cans are of such keen interest to Ian Spellerberg, but for the record, there is one thing about these objects that he can no longer tolerate. “I’m allergic to milk,” he says.

(“Milk Cans: A Celebration of Their History, Use, and Design” is available from Amazon. If you buy something through a link in this article, Collectors Weekly may get a share of the sale. Learn more.)

Rise of the Machines: Tractors and the End of Rural America

Manning Up: How 'Mantiques' Make It Cool for Average Joes to Shop and DecorateBaby's First Butcher Shop, Circa 1900