The Murals of Rincon Center in San Francisco

You wouldn’t believe the looks I was getting while strolling around the Rincon Center yesterday snapping photos of the powerful murals on the walls for Show & Tell. It was as if I had a thousand heads or something. 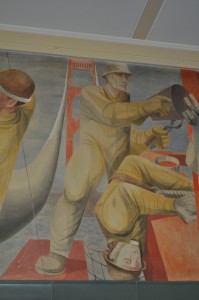 If looks could talk, the words coming from these stiffs on their lunch breaks would be something like, “What is he doing here with a camera?”

It’s really sad, if you think about it, that so many people walk in and out of the Rincon Center busy food court everyday, oblivious to the history and beauty surrounding them. In fact, in the course of documenting the series of murals in the Center, I probably learned as much about San Francisco as I had living in the area for the past four years.

You see, in 1941, at the tail end of the Great Depression, just prior to the United States getting involved in World War II, the Works Progress Administration (WPA) hired Anton Refregier, a Russian muralist, to decorate the walls of the Spear Street Post Office Annex. At the time, the WPA was one of five federal agencies created during the New Deal that was funding art projects. I have long wondered how this art was supposed to rejuvenate the economy, but that is neither here nor there. Refregier was paid $26,000 for his work on the murals.

Because of the outbreak of war, Refregier didn’t finish the murals until 1948. They remained in the post office until it closed in 1978, and have been maintained amid today’s cavalcade of restaurants in the Rincon Center. 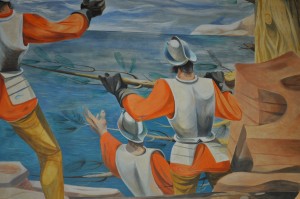 Federal art projects were fairly controversial at the time, and even more more so after the War during the Red Scare. They were contentious because locals often objected to the themes chosen by the distant federal government, while those same themes were criticized from all directions depending on the political leanings of the critics. Consequently, artists such as Refregier were forced to dial down politics in their murals.

One example of that type of self-censorship is in the last of Refregier’s 27 murals at the Rincon Center, which was supposed to feature a large portrait of President Franklin Delano Roosevelt. Authorities felt a portrait of the late president was too political. Another example is his 14th mural, titled “Torchlight Procession,” whose original design had to be painted over because it was deemed too pro-labor. 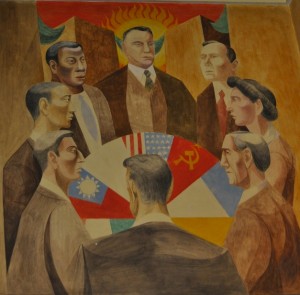 Enemies of Roosevelt and Communism often used these sorts of murals as examples of socialism and populism infiltrating the government. Today that concern seems quaint.

Indeed, they have more to do with teaching history than grinding axes. The murals take the viewer from the first days of civilization in California, right up to 1948, when the murals were completed. They chronologically follow the story of the state, with a focus on San Francisco. Some of the major events covered are the Spanish invaders and the subsequent building of the missions, California gaining independence, the Gold Rush, the 1906 earthquake and fire, and the building of the Golden Gate Bridge, among much, much more.

A year after the Post Office closed its doors, Refregier died at the age of 74. That same year, 1979, the building, which was built in 1939, was deemed an official San Francisco city landmark. It has since been placed in the National Register of Historic Places. So next time you are in there, or in San Francisco, look up, see the paint, have a bite to eat, and enjoy the history.

For more views of the Rincon Center murals, visit my Show & Tell page.

Postal AntiquesBefore email, cable news, telephones, or even the telegraph, the postal ser…