The Otherworldly Sounds of the Clavioline, From Musical Saw to Wailing Cat 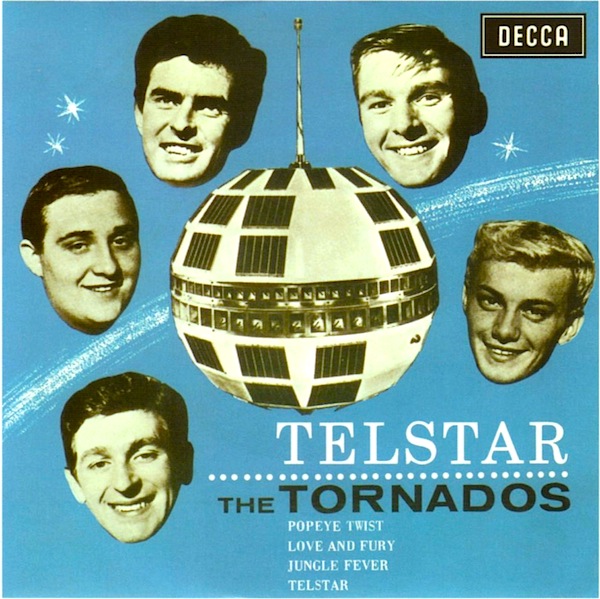 The insides of our heads are a tangle of hooks. They get this way when a pattern in a piece of music sends a hook down our ear canal and into our temporal lobe, where it may remain lodged for anywhere from 20 minutes to 24 hours. Having a song “stuck in one’s head,” as this condition is called, is generally not painful, although tunes like “It’s a Small World” and “Call Me Maybe” have been shown to be harmful to one’s mental health.

“John Lennon’s co-composer may have been an orange.”

While hooks are agnostic about the devices that deliver them into our auditory consciousness—vocal chords, electric guitars, and grand pianos all do the trick equally well—sometimes an instrument’s unique sound makes a catchy number even catchier. The 1962 cross-Atlantic instrumental hit, “Telstar,” is one such composition, owing much of its success to the eerie, space-age sound of the Clavioline. Written by the legendary Joe Meek and performed by a five-piece English outfit called The Tornados, the roller-rink-organ-on-Mars melody of “Telstar” wrenched the Clavioline from its orchestral origins, paving the way for the Clavinet, the Moog, and scores of other electronic keyboards and synthesizers.

Keyboardist Byron Elwell has been playing Claviolines since 1966, when he was in a pop combo called the Maylegends. “Every other group at the time was doing Shadows material,” he told me recently via Skype from his home in Derbyshire, England, “so we decided to do Tornados material instead.” Both were pre-Beatles, instrumental groups, but the Shadows had a larger following. 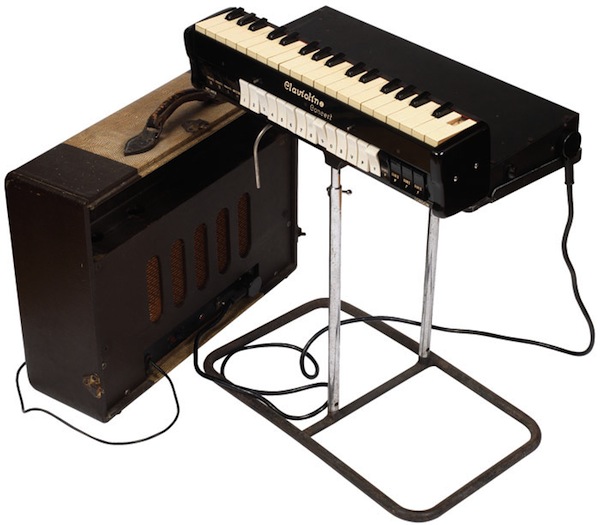 Top: Though invented in 1947, the Clavioline’s big break came in 1962 with the release of “Telstar,” which charted No. 1 in the U.K. and U.S. Above: The Selmer version of the Clavioline, shown here on a stand. Clavioline photo by Richard Ecclestone.

Covering “Telstar,” which takes its name from the AT&T communications satellite that had launched a few months before the song’s release, would be a key part of the Maylegends’ repertoire, which suited Elwell just fine. “It blew me away when I first heard it,” he says with undimmed enthusiasm all these years alter. “It sounded like something between a wailing cat and a distorted keyboard. I thought, ‘I’ve got to create that sound.’”

Elwell’s wailing-cat comparison is meant as a compliment, although it’s almost certainly not what French engineer Constant Martin had in mind when he invented the Clavioline in 1947. Martin’s idea—which was endorsed by licensees such as Selmer in England, Gibson in the United States, and Jorgenson in Germany—was that pianists would bolt Claviolines to the undersides of their keyboards so they could provide their own orchestral accompaniment during live performances.

Since the name Clavioline is a combination of clavier (keyboard in French) and violin, you might think its primary task was to replicate the sounds of strings. Yes, it did that, but the “Suggested Instrumental Tone Colours” listed in the manuals that came with Selmer versions of the Clavioline also gave players instructions on which switches to press (similar to stops in an organ) to achieve the sounds of trumpets and trombones, saxophones and clarinets, with oboes, banjos, bagpipes, and musical saws tossed in for good measure.

A tone like the one Joe Meek created for “Telstar” was probably not on Martin’s radar. And yet, musical saw? Including instructions on how to simulate the mysterious moans of a hand tool might indicate that someone at Selmer, if not Mr. Martin himself, had experimented with the instrument long enough to recognize its potential beyond violins and violas. As a mimic, the Clavioline had remarkable range—considering its postwar vintage, the instrument performed its imitations amazingly well.

“It was a surprisingly expressive, pre-Mini Moog, all-in-one setup, that’s for sure,” says Drew Blanke, aka Dr. Blankenstein. “It showed a few early signs of the basic attenuation needed for mimicking sounds, which the Moog Modular finally accomplished in 1964.” 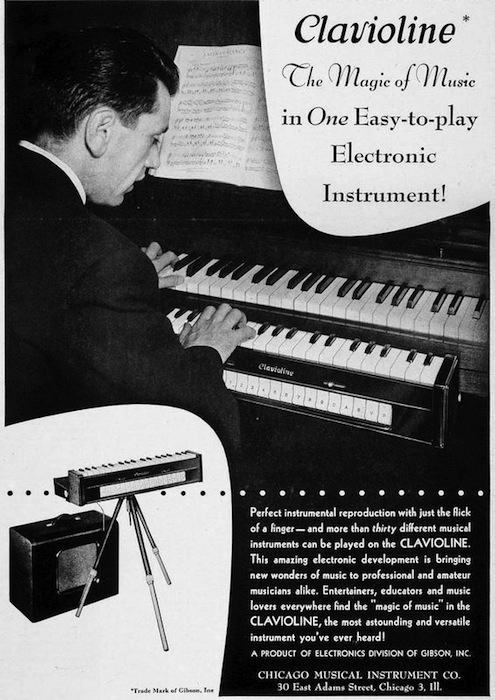 This ad for the Gibson-licensed Clavioline shows it on a stand and mounted below a piano’s keyboard. Photo via Phil’s Old Radios.

Like a good hook, attenuation is something that’s felt and experienced by the listener, in addition to merely being heard. “By attenuation I mean ‘sound shaping,’” explains Blanke, “the envelope, vibrato, and dynamic-volume changes that, when combined with pitch, give a sound its ‘shape.’ In synthesizer terms, attenuation happens in the attack, decay, sustain, and release, or ADSR. It’s what makes a sound start slow, build up, and end smoothly, like a bowed violin versus one that’s plucked. Attenuation is what was missing from the harpsichord and led to the invention of the pianoforte, which means soft (piano) and loud (forte). Unlike the harpsichord, which was all forte, the pianoforte could do both, which made it a much more expressive instrument.”

The Clavioline achieved its attenuation in a number of ways. According to the same Selmer manual that taught people how to make their Clavioline sound like a sousaphone, part of the instrument’s secret was its valves, or tubes as we call them here in the States. “With a good Clavioline, you should be able to smell the valves,” says Elwell, a reference to the dust that tends to burn off the tubes as they heat up. Then there was the circuitry, which was made up of dozens of capacitors that together formed the Clavioline’s patented filter circuit (Pat. No. 643846), which, according to Selmer, “controls the infinite variations of the wave form.”

But the real key to the instrument’s realistic attenuation may have been the “knee swell,” which was essentially a volume control, whose default position was off. This L-shaped bar, which extended out and down from the bottom of the Clavioline, allowed the player to “attack” slowly, bringing the sound up in volume or dialing it back with a nudge of the knee.

Importantly, this left one’s hands free to set and change stops, as well as to play the instrument and the piano it was bolted to. “You cannot play a chord on a Clavioline,” Elwell adds. “It’s a lead instrument. No matter how many notes you press down, only the highest one will play.”


Another quirk of the Clavioline was its octave range, which was pretty good for an instrument with just 36 keys, from low F to high E. That’s only three octaves, but the player could raise or lower the range of the entire keyboard by a full octave with the flick of the wrist. “There’s a slider between the keys and the stops that the player can push to the left or right using two protruding metal rods,” Elwell says. “If pushed to the left, this transposes the instrument down an octave; to the right, it goes up an octave. This is what gave the Clavioline a five-octave range.”

When performing, that range often proved useful to Elwell. “I used to play lead on it, but when the guitarist was soloing, I’d play the bass melody. It gives a very deep bass sound, quite a good little machine. But when it’s on the top octave, it’s very piercing, believe you me.”

That’s where much of “Telstar” lives. “Joe Meek used a lot of compression and echo, that’s how he got his sound on ‘Telstar.’ Plus he triple-tracked the lead. He was a genius as a composer; nobody could copy how he did it. It made ‘Telstar’ the only No. 1 instrumental on both sides of the Atlantic.” Meek’s musical instincts were not exactly unerring, though—reportedly, he advised Brian Epstein against signing The Beatles (Epstein ignored his advice), and Meek himself passed on the chance to sign a young singer named Rod Stewart. 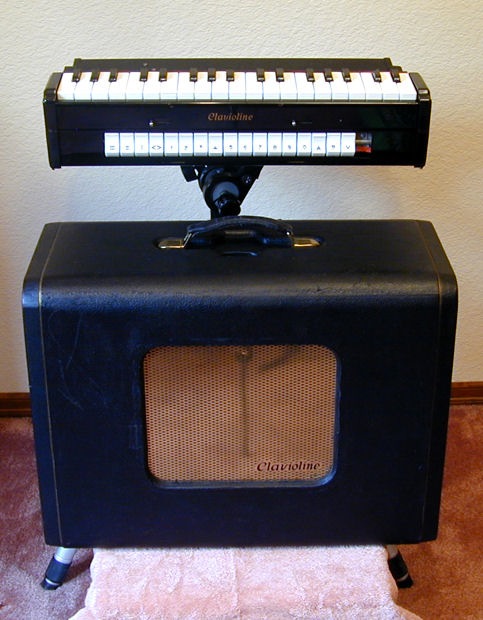 During the 1960s, “Telstar” sold some five million copies, but Meek didn’t see a shilling of royalties due to a lawsuit by a French composer named Jean Ledrut, who accused Meek of plagiarism. In February of 1967, Meek’s good name was finally cleared, but it came three weeks too late. In grim financial straits, Meek was also fearful he’d be implicated in a sensational murder for which homosexual men were being rounded up as suspects—the male victim had been sexually assaulted before being chopped to pieces and packed into a couple of suitcases. Meek’s homosexuality, which was illegal in England at the time, was known to authorities—in 1963, he’d been fined for “importuning for immoral purposes.” Down on his luck, depressed, and obviously panicked, Meek killed his landlady, and then himself.

“It sounded like something between a wailing cat and a distorted keyboard. I thought, ‘I’ve got to create that sound.”

Later that year, in May, the Clavioline would get one more shot at fame when its 50 pounds of circuits and valves were lugged into Olympic Sound Studios in London. The occasion was a recording session by the band Meek had counseled Brian Epstein not to sign, plus Mick Jagger on backing vocals, for a song called “Baby You’re a Rich Man.” The Clavioline can be heard in the discordant meanderings of John Lennon’s keyboard solos, which have a whining, almost sitar-like quality. Unlike the lead on “Telstar,” though, which Elwell can play note for note, it’s not likely anyone would be able to replicate Lennon’s artistry, perhaps because Lennon’s co-composer may have been an orange, which, allegedly, the Beatle rolled up and down the instrument’s keyboard. 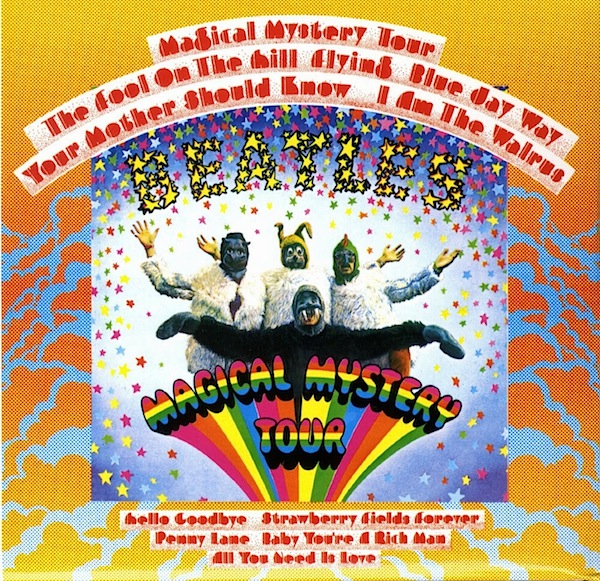 Other than “Telstar,” the most famous use of the Clavioline was on “Baby You’re a Rich Man” by The Beatles.

After his Clavioline years, Elwell toured the world as a member of the United Kingdom’s top Elvis-cover band, Dave Kaye and the Dykons. “The Clavioline didn’t fit in with that scene,” he says, “so I played a Vox Continental organ.” Though a more traditional electronic instrument than the Clavioline, the Continental had a few endearing quirks of its own. “It was known as the Hair Dryer Vox,” says Elwell, “because on cold days I had to put a hair dryer on it before it would start playing. But once the little transistors were warmed up, we were away.”

These days, Elwell is unapologetically retired, though he’s cut back on his collection of Claviolines—at one point he owned nine of the instruments, but now he’s down to three. And he still plays music from his third-floor studio, where he records Clavioline-esque compositions, including the theme from the 1960s animated puppet television show for kids called “Fireball XL5,” although for the track posted above, Elwell played Technics and Yamaha keyboards to achieve the song’s space-age sound. “That was one where I couldn’t find any sheet music,” he says, “so I sat down, got the tune in me head, and just played it. On the finished track, I play it all myself, the back end, the lead, everything. It’s pure love.”

(To learn more about the Clavioline, visit Phil’s Old Radios, 120 Years of Electronic Music, and Sound on Sound.) 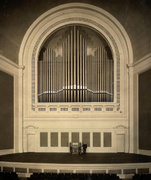 Pulling Out All the Stops to Save a 40-Ton, 100-Year-Old World's Fair Pipe OrganHow a Gang of Harmonica Geeks Saved the Soul of the Blues Harp 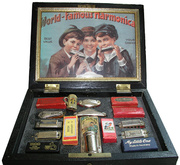 OrgansSince the middle of the 20th century, the words “organ” and “Hammond” have …