The Tuxedo Coat That Found Its Way Home 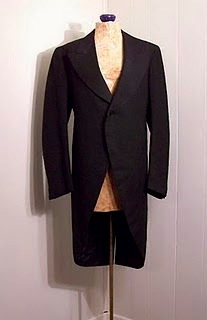 I love gentleman’s bespoke tailoring and have an affinity for vintage tuxedo coats—in particular, tuxedo tails. A recent acquisition of a 1939 gray wool tuxedo tailcoat was a pleasant surprise.

Tailored by J.P. Nugent of Montreal for Mr. Pierre Beullac, I had in my hands a little bit of Canadian history:

“Pierre Beullac was a Canadian lawyer, then a judge. His father arrived in Montreal, Canada, in 1874 and established himself as a decorator of churches, then later ballrooms. Pierre Jr. was a founding member of the Canadian Club of Montreal and Vice-President. This club tradition continues to today and is a forum for great minds and thinkers, a prestigious forum that has included an incredible array of world reknown guest speakers.” 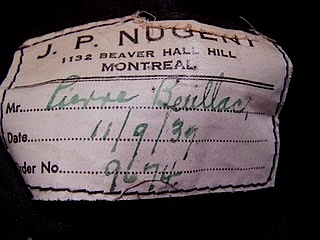 I decided to part with it on eBay, being uncertain how to price this item.  Honestly, I wanted to add it to my personal collection, but something was telling me otherwise. About two days into the auction, I was contacted by Mr. Beullac’s great-granddaughter, who happens to live in Montreal. To my considerable delight, she won the auction and was so happy to have an heirloom of her great-grandfathers’ return home to its roots. In her words, “It was meant to be.”

The vastness of the world seems to disappear at times like this. Two people who have something in common can find one another without ever meeting, and in fact, there were several people in this story who “met” without physically meeting. I met Mr. Beullac, his tailor, and his great-granddaughter. 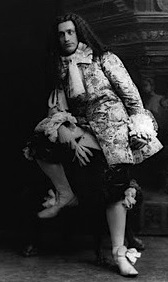 Pierre Beullac didn’t always dress like this, as a young lawyer in 1898. Here, he is in costume.

Later on, she also informed me that she gave the tuxedo to her father as a birthday gift—he now has something of his grandfather’s namesake.

I had not heard of a Mr. Pierre Beullac until acquiring his jacket. This in turn led me to find out a little more about my Canadian history—a country considerably young, but with rich history and a unique people. As one historical fact led to another, I stepped back to fully realize my specialized field. Several times now I have had the honor of returning a prized possession or a family heirloom back to where it belongs. The sensation of a unique discovery, researching, contacting various experts within the field—all produce the feeling of being an archaeologist. This was not in my history textbooks in school!

Fate? Karma? Coincidence? Google alerts? Call it what you like, and though I am not particularly superstitious, this had a feeling of the unexplainable.

Meet the Man Who Made Cowboys Love Rhinestones

A House for 1,000 Vintage Hats, and the People Who Love to Wear ThemWWII War Paint: How Bomber-Jacket Art Emboldened Our Boys

Mens Coats and JacketsThink of coats, and bulky garments designed to keep us warm or dry probably…