This article on the clockmaker Simon Willard describes the characteristics associated with Willard’s craftsmanship, detailing some of his specific clocks to illustrate. It also notes the French influence on American clockmaking. It originally appeared in the June 1939 issue of American Collector magazine, a publication which ran from 1933-1948 and served antique collectors and dealers.

The name Simon Willard has always stood for superior materials, whether metal or wood; superior workmanship, whether of the movements he made himself or the cases that were made on order for him by excellent cabinetmakers; and superior, although comparatively simple design.

By Simon Willard Grafton: This unusual and little-known clock in the Hanks sale has Willard's name on the dial. In design, however, the movement is a departure from the typical of this period in his career.

Certain characteristics have long been considered sure indications of Willard workmanship, deadbeat escapements with the teeth “dished” in the English manner, a “T” or double bridge to support the pendulum and keep its swing true; and in his earlier clocks, wooden pendulum rods, two long screws that held the movement in place passing through both front and rear plates. Dials were painted sheet iron; occasionally painted wood, and rarely, polished brass, and were held in place by three hooks so slotted that they could be turned with a screw driver.

With cases, those for his grandfather clocks had an individuality of design; those for his banjo clocks were rarely gilded, had a mahogany backboard, simple finials, and never the eagle with outspread wings. For those cases that had decorative glass panels, the designs did not include landscapes, naval engagements, or a combination of the American flag and the eagle. These characteristics, and a few others mentioned in his biography, we have come to realize are not always sure signs of Simon Willard origin. 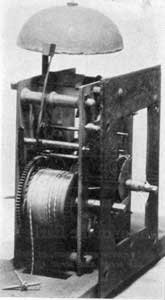 He is generally thought to have followed the English school of clock design. He used the standard grandfather-clock movement as his basic model. This he modified with his Massachusetts shelf clocks and he made other changes when he evolved his banjo clock, such as moving the pendulum from the back to the front of the movement. In fact, it has been considered that he made chiefly grandfather and banjo clocks with some few interesting gallery and turret clocks.

This shows a versatility, but not more than might have been expected of his brothers, former apprentices, or skilled contemporaries. However, Simon Willard was a born inventor and actually possessed a facility far beyond that generally recognized. He made a number of other clock-movement designs which are little known, even by students of horology. This is because of their extreme rarity; and when discovered, they pass almost at once into closely held private collections. Even his biographer made no mention of the movements which Willard made in the French manner.

As proof of Simon Willard’s versatility, I shall cite and describe several little-known clocks that have unusual characteristics or distinct individuality of design. 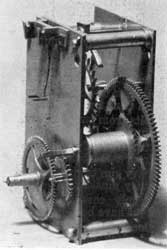 In his Grafton period, before he moved to Roxbury, about 1790, he made splendid grandfather, grandmother, Massachusetts shelf, and some wall clocks. The latter were about 18 inches tall, contained a reduced size grandfather-clock movement, had a relatively short pendulum, and a one-strike mechanism located at the top of the movement that was released on the hour by a rotating wheel with a special pin. The winding post was located between five and six on the dial. They were thirty-hour movements and not particularly popular as no clockowner has ever liked to wind his timepiece every day.

Also of the Grafton period was a small clock which appeared in the Hanks sale of May, 1938, at the American Art Association-Anderson Galleries. The case was of very simple workmanship, 18 1/4 inches tall. The description ran: “rectangular case; double panel doors, surmounted by stepped cornice. Brass works with name ‘Willard’ inscribed on dial.” I examined this clock closely and found the winding post between five and six o’clock, solid wheels, the upper part of the pendulum rod connected directly to the verge and a curious brass block into which the pendulum rod fitted. Further, the upper half of this rod had a triangular offset to keep it free of other parts as it swung back and forth. To the bottom of the dial was attached an apron that bore the name “Willard.” It was attributed to Simon Willard Roxbury, circa 1770; but I believe it was made earlier at Grafton or reflects the experiments in movement designing he did there.

A Willard Banjo: The dial has been removed to show the skeleton construction of this late movement by Simon Willard.

In it can be seen germs of the design later employed in his clocks after he had come under the influence of French clockmaking. This French influence on American clockmaking has not been generally enough recognized. It came about in two ways. First, the fine clocks of the Louis XVI period, imported chiefly from Paris; and second, the clocks made in America after French clockmakers migrated here as refugees from the Reign of Terror and enforced military service in the Napoleonic armies.

Willard knew both the imported French clocks and those made in this country by refugee clockmakers, and being a designer always keen for new methods and refinements was easily influenced. The most striking Franco-American manifestation was the lyre clock which followed the banjo. It was of the mantel type in France, but in America became an elaboration of the banjo clockcase and as such was a wall clock. Simon Willard made this as did his competitors in banjo clockmaking.

But there was another type of French clock, comparatively unpopular in America, which influenced Willard to a far greater extent. It was the skeleton clock, made by both French and English craftsmen late in the 18th, and early in the 19th Centuries. They were mechanical feats and as such attracted wide interest from clockmakers. 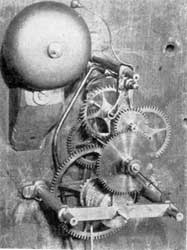 Being, as the name implies, a clock with a framework mechanism, the solid front and backplates usual in the grandfather, grandmother, Massachusetts shelf, and banjo clocks were replaced by two narrow and slender upright plates with a horizontal crossbar for stability. Because of these narrow plates, the wheels and arbors were placed one above the other and the winding post at six o’clock, a vertical straight line arrangement in contrast with the irregular location possible in movements with the larger oblong plates. In the latter, if the movement had two trains, the winding posts were at four and eight; and at two if there was only one.

As a variation in the skeleton clocks, the strengthening crossbar was sometimes omitted and the upright plates branched into an arch form toward the bottom. Such an arrangement is found on the Willard clock of the French type which has come to my attention. Another that displays certain French characteristics of design is a New England grandmother clock in the collection of Ginsburg & Levy, Inc., which has puzzled clock enthusiasts as to the identity of its maker.

It has a combination of superior workmanship, crossbar front and backplates, winding post at six, a metal dial, and direct connection (without spring or bridge) of pendulum rod and verge. Also, it has the same shape of bar connecting upper and lower section of the pendulum rod that is present in the Hanks clock. It is reasonable to attribute this clock also to Willard at about the same time.

A Lighthouse Clock: This presentation clock, by Simon Willard, has glass bell cover and mahogany case. In the base is set a portrait medallion of Lafayette.

Further, from the Norris collection I acquired a curious banjo clock with late American Empire veneered mahogany case of the presentation type. Its movement has the same crossbar plates, winding post at six, and one further modification, the pendulum is hung at the front. Also, the pendulum rod keystone has an unusual oval shape. The rod is hung from a single bridge by a spring and is connected to the verge by a slot in the lower part of the keystone in which lies the rod from the verge. Probably designed to reduce pendulum sway, it results in an almost oval pendulum movement, and is a clock difficult to keep running. A leading clock expert has pronounced it the work of Simon Willard between 1825 and 1830.

Another unusual clock is in the Hugh C. Leighton Collection with a large carved and gilded wooden eagle front. Here the movement again has the crossbar plates, winding post at six, and a strange three-in-one dial arrangement. Since winding post and hour hand arbor are located at the same spot, and one is inside the other, it is necessary to remove the hour hand to wind the clock. Independent examination by a well-known expert resulted in the opinion that it was probably made by Simon Willard.

Of his lighthouse clocks, I recently had an opportunity to study a fine presentation one in the collection of Clapp & Graham, Inc., and more recently in the stock of C. W. Lyon, Inc. Its movement definitely shows skeleton characteristics, although he used the rectangular front and backplates. But the wheels, except for one, are placed in the straight line position, the strike is of the one-blow type, and the winding post is at six. Simon Willard makes quite a point of the latter in an advertisement in the Columbia Centenel, Boston, October 2, 1822, where he states that to wind the clock it is only necessary to raise the bell-jar top slightly which would keep out dust. He also adds that this clock “keeps better time than the French.”

Finally, a most extraordinary skeleton clock, caseless but protected by a very tall, slender bell glass, has just been added to the James Arthur Clock Collection of New York University. I was able to study this through the courtesy of Israel Sack, Inc., with permission given to discuss it by the curator of the collection. The opinions that follow are strictly my own.

A Unique Skeleton Clock: Now in the James Arthur Collection. It is, in the author's opinion after careful study, the work of Simon Willard.

From the base rise five steel rods, four at the corners, and one in the center, passing through a central hole in the weight. The works are of the crossbar type with an arclike addition which supports the wheel train operating two horizontal metal bands that rotate somewhat like a French urn clock. I think these bands are numbered to show the days of the month and of the year although they run to 38 and 366 respectively. The pendulum is hung at the rear and has a rectangular half keystone to escape the month and year bands.

I think this clock is by Simon Willard and of his French or skeleton type. It is related to, but not of the lighthouse type and appears to be a most unusual example of an experimental model. It would explain why there is no finish or case below the month and year bands and why it is protected by such a tall glass bell.

It seems reasonable to consider this clock as representing an attempt by Simon Willard to evolve a new design that would have a long pendulum and therefore be a better time-keeper than his not too reliable lighthouse type. I believe that this clock was his ultimate attempt to utilize the advantages he had observed in certain French clock designs.

ClocksThink of antique clocks, and a stately grandfather, German cuckoo, or Art D…