Flashback: The Women Silversmiths of England

This article discusses female goldsmiths that worked in England during the 17th, 18th and 19th centuries, noting how they learned, their makers’ marks, and their family relationships. It originally appeared in the May 1938 issue of American Collector magazine, a publication which ran from 1933-1948 and served antique collectors and dealers.

Until fairly recently, England was a man’s country and women as a class enjoyed few rights that their husbands and male relatives could not invade. Only a queen occupying the throne in her own right was free of this domination. Otherwise, law and custom gave men control of all property and rendered them superior beings to be obeyed by their women folk without question. 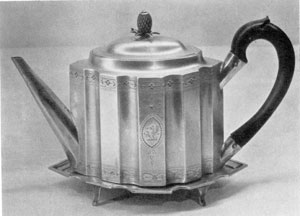 By Hester Bateman's Son and Daughter: This teapot and stand bear the mark of Peter and Ann Bateman, London, 1792-93. Located, as was their mother, on Bunhill Row, by 1800 this partnership became Peter, Ann & William Bateman.

Such was the law. In actual practice, even before the time of Queen Elizabeth, there were forceful women who conducted business in their own names and on an equal footing with men. Nowhere was this clearer than in the affairs of The Worshipful Company of Goldsmiths. With a royal charter dating back to 1327, this craft guild embraced not only those who worked in gold and silver, but bankers, jewelers, engravers, gold beaters, and even pawnbrokers. Except for that of banking, women’s names are found in the lists of these various callings from a very early date.

In 1513 there was Mrs. Harding, goldsmith, who evidently carried on the business of her husband, Robert. The latter was established on Cheapside in 1504. Although the Goldsmiths’ company has a continuous record of the individual makers’ marks from 1479, identification of them with the names of the makers is lost information before 1697. Between this latter date and the Victorian era there worked in London a total of 63 women silversmiths, each possessed of her own registered touch mark. That alone is evidence that they were workers at their trade in good standing, for the police powers of the Goldsmiths’ company are well known.

During this period of some 150 years most of the collectible English antique plate was produced. Yet, save for Hester Bateman, these 63 women have been the forgotten craftsmen in the various treatises on English silver. This oversight was largely due to the assumption that they were simply widows carrying on their husbands’ businesses and not of themselves workers in silver. 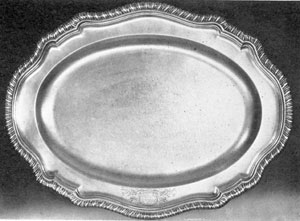 Platter by Magdalen Feline, London, 1754: From 1720 to 1739 the widow of Edward Feline was located on King street, Covent Garden. 1753 to 1762, Magdalen Feline was working in the same vicinity. They were probably mother and daughter.

In 1935, however, Sir Ambrose Heal published, under the patronage of The Worshipful Company of Goldsmiths, a large volume known as The London Goldsmiths. It covers the period of 1100 to 1800 and is a record of names, addresses, and definite trade designations within the all-embracing term of goldsmith. It discloses that, in practically all instances, women with recorded touch marks were actual craftsmen in one or another branch of silversmithing. The largest number of them were listed as “plate workers,” the all-embracing term of the day for wrought silver.

Some of these 63 women were members of well-established London silversmithing families; others worked in partnership with a husband or a brother; a few had as partners men for whom no relationship of blood or marriage can be discovered; and occasionally a partnership of two women existed. The famous Hester Bateman trained both her sons and daughter to the trade and they in turn produced examples of silver just as graceful and charming as their mother’s work.

The question naturally arises as to how Hester Bateman and other women silversmiths learned their trade. From the early days of the guild system as it prevailed in England, it was not uncommon for the women in the family of a master workman to help in his shop. They were not considered as regular apprentices but, if so inclined, they could and did learn the particular trade just as thoroughly as though they had been bound out for the purpose. This would probably account for the majority of women silversmiths, but there were 14 for whom there appear to be no male silversmiths of the same surname who worked either before or at the same time. 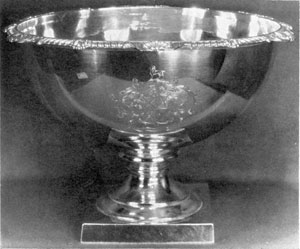 By Rebecca Eames and Edward Barnard: This piece is dated 1616, but the partnership, located Amen Corner, registered their mark in 1808. The bowl on square foot with gadroon and shell border stands 8 inches high and is 11 1/2 inches in diameter.

Throughout the 17th Century it is known that women were sometimes apprenticed to learn various trades, including such an arduous one as that of carpenter. Since the apprenticeship system continued through the 18th and well into the 19th Centuries, it can be assumed that these 14 women must have learned their trade by being indentured to some silversmith, either a family connection or totally unrelated.

Incidentally, becoming a journeyman silversmith required young women of better than average physique, for the tools whereby silver was formed into such things as tankards, dishes, trays, kettles, teapots, and the like were neither light nor easily handled. There was the heavy sledge hammer weighing eight or more pounds with which the silver was beaten on the specially shaped anvils many times in the course of making a piece.

We can picture these women silversmiths, then, as hardy, muscular individuals, capable of taking their turn at forge or anvil with the men of the shop. Most of their story, however, must be gained from study of the goldsmith’s marks and examples of their work still extant. Considering the large amount of silver produced by London silversmiths from the close of the 17th Century through the first quarter of the 19th, surprisingly few examples, with the exception of Hester Bateman and her children, have survived.

The tables of makers’ marks in any of the standard books on English silver reveal much regarding the relationship that existed between the men and women who followed this craft. In the majority of instances, the individual touch marks of women craftsmen was a diamond shape which, of course, was the lozenge of heraldry in which a woman’s crest or cipher was framed. Further, if a woman was carrying on the business established by her father or husband, we invariably find that, except for the shape, her mark bears a distinct resemblance in design to that of her male relative. The use of the lozenge tended to disappear during the third quarter of the 18th Century. 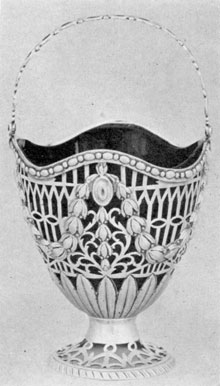 By Mary Makemeid 1774: Designated as goldsmith, this woman was located on Shoe Lane, London, when here mark was entered in 1773.

One of the outstanding examples of the distinct effort to have a woman’s mark as near as possible that of the man of her family whom she was succeeding is the touch of Elizabeth Tuite, whose mark was entered in 1741. In 1721 there had been John Tuite. His mark consisted of the initials of his given and surname within an oval with the outline of a footed cream pitcher between the letters. In 1739 he had a second mark of shield shape registered. This also incorporated the distinctive cream pitcher. So it is not surprising that when Elizabeth secured her mark the device of the cream pitcher was retained although she used the initials E T.

Jane Lambe’s lozenge-shaped mark was entered in 1719 and above the initials L A is to be seen a small animal, evidently a lamb. The same device occurs in the mark of George Lambe, 1713, although its outline is totally different. In 1713, also, another mark of lozenge shape with the lamb device was entered for the widow of George. Whether Widow Lambe was the same person as Jane Lambe who worked on Sandos street and had marks entered in 1719 and again in 1729 is not clear.

In addition to touch marks, the location of the shops of both men and women working in silver is frequently helpful in establishing any relationship that may have existed. In the Pantin family there were a number of silversmiths, dating from Simon Pantin in 1701 to Mary Pantin, 1733, who was located on Green street. This was also the address of Simon Pantin, Jr., whose mark was entered in 1731. All of these marks have a small tree between the initials, an obvious effort to retain continuity and indicate that the possessors were all members of the same family. 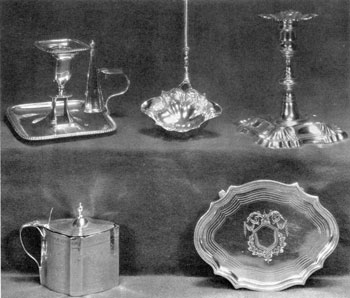 In addition to the marks showing a family relationship are a few in which seemingly unrelated men and women were in partnership. Ann Craig and John Neville entered their mark in 1740 and were located on Norris street, St. James. Louisa Courtauld had her own mark in 1766; was in partnership in 1769 with George Cowles and in 1777 with Samuel Courtauld. About the same time there was the partnership of Jane Dorrell and Richard May, whose mark was established in 1771. In 1808 Rebecca Eames and Edward Barnard entered the mark of their partnership. As late as 1840 Mary Chawner, who had previously had her own mark, entered one for her partnership with George W. Adams.

Probably the best known of the women silversmiths of London was Hester Bateman. There are no indications that she came of a family connected with the craft, but both her sons and daughter followed it. Her first mark was entered in 1774, the script initial HB in an escalloped oval. She was then listed as a goldsmith on Bunhill Row. From 1790 to 1793 it was Hester Bateman & Co., silversmiths, while in 1791 Peter and Jonathan Bateman entered their mark as plate workers; the next year Peter and Ann entered another; and finally in 1800 a fourth was entered as Peter, Ann and William Bateman. With all these the address was always Bunhill Row and the trade designation, plate workers.

Outside of London there were at least seven women silversmiths with registered marks. Newcastle had four, and Chester and Hull one each. In Ireland there was Jane Williams.

English SilverNo one knows for sure, but some historians speculate that the word “sterlin…