This article describes the dresses that were worn to a ball by two prominent women in 1780. It originally appeared in the October 1948 issue of American Collector magazine, a publication which ran from 1933-1948 and served antique collectors and dealers.

When Mrs. Gabriel Ludlow and her sister, Mrs. Abraham Walton, entered the ballroom about 1780 they must have created quite a sensation in the sophisticated little town of New York. Their brocaded silk dresses, entirely different in pattern, are each strikingly beautiful both in design and, particularly, in color. They have been preserved through six generations, handed down from mother to daughter until they became the property of Miss Helen G. Ferguson, who presented them to the Museum of the City of New York before her death. 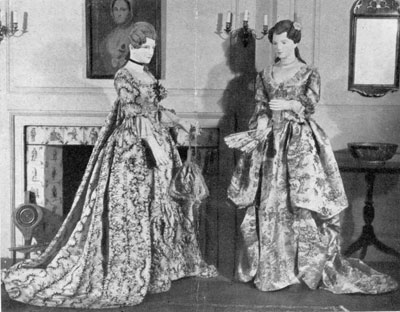 Both dresses are now displayed in a contemporary room where their color is shown to advantage against a background of oyster-white wood paneling. The mannikins wearing them have their hair dressed in the fashion of the time — a low stiff pompadour and tight curls at each side. Artificial flowers, the latest mode in 1780, which are made of silk chenille on wire, form a corsage on the bosom of Mrs. Walton who also wears a brooch attached to a black velvet ribbon neckband. Another contemporary brooch decorates the front of the other gown.

Mrs. Ludlow wears a deep yellow satin dress with a pattern of trees, houses, flowers and birds, all in natural colors, woven into the material. This scenic design looks to be English, yet the heavy soft fabric is believed to have been woven on the famous textile looms at Lyon, France.

The dress is made with a low square-cut neck, and sleeves to the elbow with deep ruffles. The skirt is divided in front, as was usual at that time, to show a petticoat of the same yellow material, and is looped up at each side showing the softness of the fabric as it falls into folds. The richness of the color vies in interest with the design and the heavy soft quality of the silk which has lasted 168 years.

The gown worn by Mrs. Walton is a heavy white ribbed satin with a pattern woven in stripes of a vine and flowers, with greens and pinks predominating. From the design of the fabric, textile experts seem to think it must have been woven in England at the Spitalfields looms.

The style of the dress differs from the yellow one in that it has wide box-pleats hanging from the shoulders at the back, often called “Watteau pleats.” The skirt is open over a petticoat of the same material and is bordered down the front with an applied band of the satin laid in box-pleats and edged with silk galloon of the 18th century. These pleats stand out as they did originally, being still stuffed with wads of cotton. The same treatment of pleats decorates the bottom of the petticoat in the front, adding to the richness of the decoration.

The two sisters fortunate enough to own such handsome dresses were, before marriage, Grace and Ann Williams, daughters of Sarah Olivier and Charles Williams. Their marriages are listed in the records of the Trinity Church Parish, N. Y. In 1766 Grace Williams married Abraham Walton, and in 1771 Ann was wed to Gabriel Ludlow, a warden of the church. All these families were socially prominent and the weddings must have been big events of the time.

The Ludlows were well-known citizens, members of one of the wealthy merchant families. After Gabriel Ludlow’s marriage to Ann Williams, they moved uptown to Wall Street where there were many fashionable homes. Gabriel and his father, Henry Ludlow, were both vestrymen of Trinity Church, so it is not surprising to find their weddings recorded there.

Abraham Walton, born in 1739, was the seventh child of Jacob and Maria Beekman Walton. His father, Jacob, and his uncle William were among the richest shipping merchants of that day. The two brothers had been left a large fortune by their father, also a shipping merchant, and they increased it greatly. They formed the firm of Jacob and William Walton until the death of Jacob in 1749, when the name was changed to William Walton & Co.

After the death of his brother, William Walton, who had no children of his own, took care of the fatherless children. Jacob and William married Beekman sisters, so that the relationship was close. Abraham was brought up in his uncle’s house from the age of ten and was accustomed to the ease and elegance of society. His uncle William built an enormous house in 1752, always known as the Walton Mansion, on land bordering Franklin Square that he inherited from his father. It fronted on what is now called Pearl Street, and the gardens extended down to the river. It is said that the grounds were laid out and cultivated with fastidious care and that townspeople used to walk out to see them on a Sunday afternoon. The house was considered one of the finest in the city for 127 years, and was demolished only in 1881. This account affords some idea of the background for these lovely satin gowns.

DressesFashionistas go wild for a good vintage dress, and it's easy to see why. As…