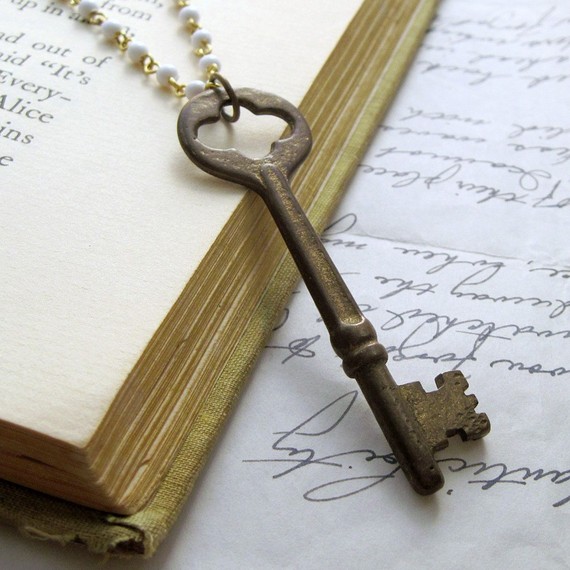 Keys have always been endowed with a certain sort of magic. They have the power to reveal things that were unknown or obscured before. Even the word “key” means a tool that opens physical, intellectual, or spiritual barriers. A key can give access to riches and treasure, or it might keep safe closely guarded secrets, as in the legend of Pandora’s Box. 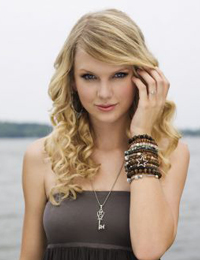 Locks and keys can also be used to protect one’s most valued belongings or to secure the gates of a walled city, so having a key is both a symbol of trust and conquest. Back in the day, keys were used as a means to flaunt your wealth, as they indicated you had something worth stealing. Metaphorically, a key can expand knowledge or offer passage to other, metaphysical realms.

But, when I see a girl wearing a skeleton key necklace, like the one offered by Lauren Blythe Designs on Etsy.com (above) or the one worn by country-pop star Taylor Swift from BeMonogrammed.com (right), I sometimes wonder what it means to her.

When a woman puts an antique key on a chain and wears it around her neck, close to her heart, it could mean any number of things, a mystery just begging to be unlocked. The precedent for jewelry as symbols goes back at least to Queen Victoria, who hardly ever wore jewelry that didn’t have a emotional message of love or mourning. On the other hand, it could just be fashion. 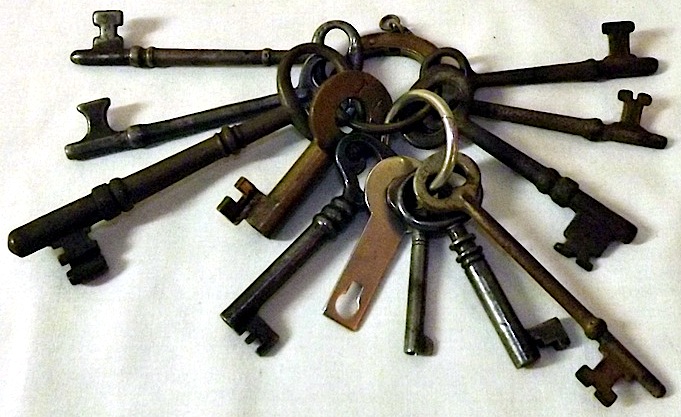 Most skeleton keys are really bit or barrel keys, such as all but the flat one at bottom-center shown here.

Being a history nerd, I have to quibble a bit with the skeleton key necklace trend. Let’s start with the name. Clearly you look at these rusty old antique keys and they have a Halloweeny quality to them, as they resemble slender arm and leg bones that could be rattling in a grave. The tops, or bows, of these keys often feature Gothic trefoils, the triple-circle motifs seen in medieval churches representing the Trinity, or quatrefoils, the four-leaf clovers representing the Four Gospels. These bow shapes were thought to give the key the protection of God. So, from this standpoint, the impulse to associate them with Goths and call them skeleton keys makes sense.

The key to your heart?

More often than not, though, necklaces made out of skeleton keys do not, in fact, use actual skeleton keys. A skeleton key is a specific kind of antique key that opens many doors (there we go again with the metaphors!). But if you pick up an antique key and you’re not a knowledgeable key collector or trained locksmith, you probably can’t tell whether it’s a skeleton key or not. Odds are the key you are attracted to for its design is just a single-lock key rather than a skeleton master.

This style of key, which was used for more than 1,500 years, is known as a “bit” or “barrel” key. The bits are the teeth at the end of the key that operate the lock. Such keys can be called barrel keys when their shank, the long, bone-like part of the key, is hollow, like a barrel of a gun. The other thing to know about antique bit and barrel keys is that their companion locks were tremendously easy to pick.

I understand an antique key conveys mysteries that are ancient and universal, whereas your house or car key merely suggests something much more practical and mundane, but at least newer keys really work. 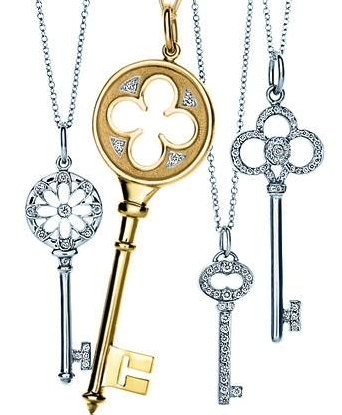 These fine-jewelry pendants from Tiffany’s obviously don’t have corresponding locks.

The reason is that modern blade keys operate the pins and wards of a lock in two dimensions—not just one the way a bit key does—and so provide much more security. When I see a girl with wearing a bit key around her neck with a heart-shaped bow, it screams to me, “The lock on my heart is extremely simple to crack!” Which, to be fair, could be true.

The good news is, unless you want a fancy sterling silver key encrusted in white diamonds and have no interest in owning an authentic piece of the past, antique keys are cheap. You can get one for around $1, put it on a chain, and voila! You have all the mysteries and treasures of your life embodied in a one-of-a-kind pendant. If you want your necklace to be as beautiful as it is unique, look for a bow in the French Rococo style, as locksmithing became an art for French metal workers, who made intricate, swirling, filigreed bows.

Here is some ancient key folklore, for Halloween fun: 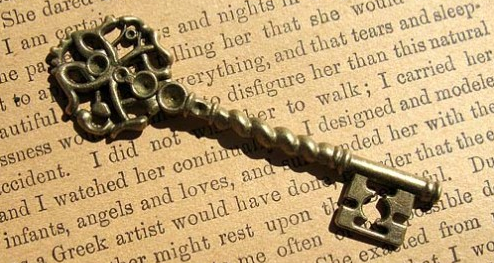 This is an example of an elaborate French-style antique bit key.

Hayden Peters Talks About Skulls, Hairwork, and the Fashion of Mourning

NecklacesNecklaces are among the oldest forms of fine jewelry, in no small part beca…