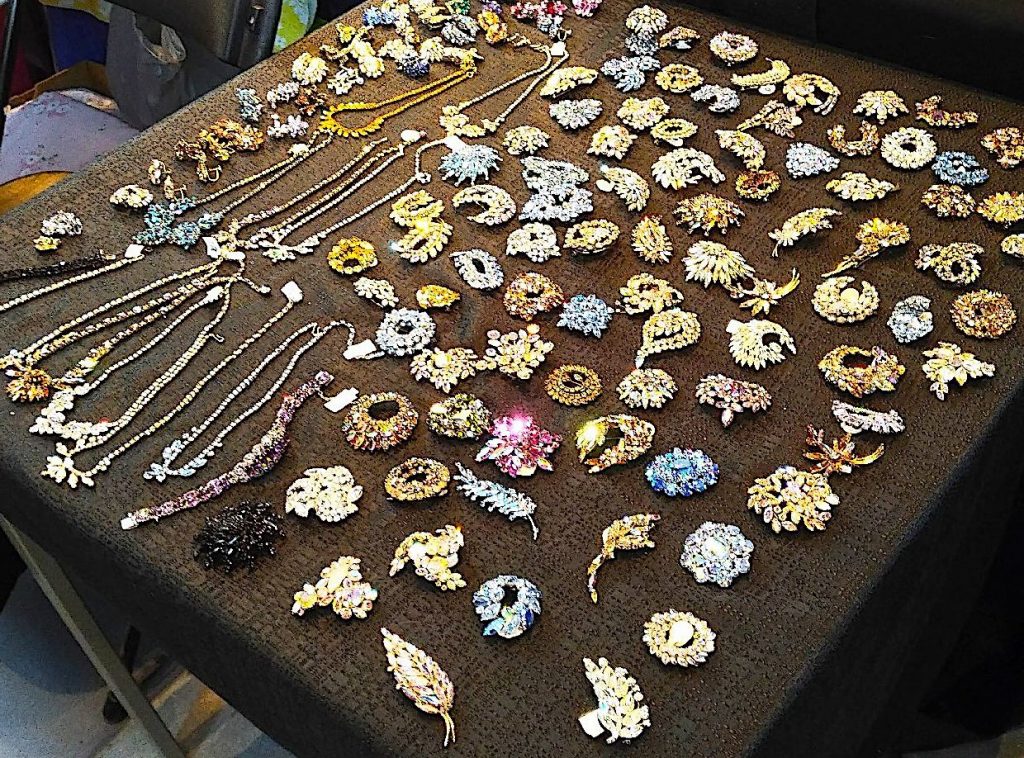 A portion of Valerie Hammond’s inventory of vintage Sherman costume jewelry before it was sold to the Sherman family.

Assuming the predilection for niceness among Canadians is a sincere expression of their nation’s character, could niceness also be a quality of Canadian products? Bread made from wheat harvested in Canada probably tastes no different than bread made from the American stuff, so that’s probably a bad example, but what about designed goods, which tend to be more reflective of their culture?

“The women would wear a piece of jewelry once—there’s no way they would wear the same thing twice!”

As it turns out, Canadian costume jewelry could indeed be called nice, as we learned recently when we spoke with Valerie Hammond, a costume-jewelry dealer, appraisal expert and writer for ValueMyStuff, and the author of All The Glitters (2006), an essential, but out-of-print, reference guide to the brooches, bracelets, earrings, and necklaces manufactured by Montreal costume jeweler Gustave Sherman (1910-1984).

During the heyday of G. Sherman & Company, which was the late 1940s through most of the 1970s, “The tastes of the Canadian market were different than the U.S.,” Hammond says. “I don’t mean to say that Canadian women didn’t have style because they did, but it was more of an understated elegance, a little more ‘I’m going to wear this to church on Sunday’ than ‘I’m going to wear this to a nightclub.’ Not flashy, more genteel.” 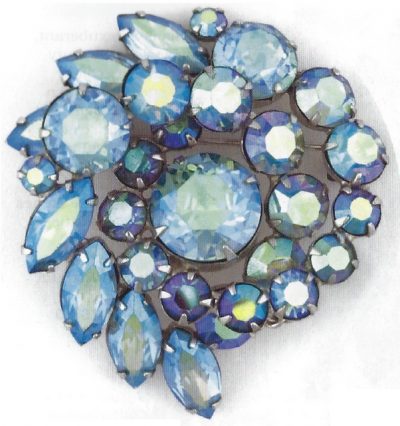 This vintage Sherman swirl has some of the largest Swarovski crystals Hammond has ever seen in a brooch.

Born to Lithuanian-immigrant parents, Sherman was not a natural candidate for a career in costume jewelry. According to a brief biography written by his granddaughter Genna, Sherman joined the 7th Cavalry in Texas at the age of 17. In Genna’s telling, Sherman was a man’s man, who enjoyed poker, basketball, and was so good at boxing that by the time he returned to Canada and joined the Royal Canadian Air Force during World War II, he was fit enough to become a divisional boxing champion, even though he was by then in his early 30s.

After the war, Sherman sold life insurance before pivoting to jewelry, which he manufactured to his own exacting standards. Sherman purchased his findings from B.A. Ballou & Co. in Rhode Island, which also sold clasps and other connecting hardware to such American costume jewelers as Hobe and Kramer. Sherman also imported his rhinestones from Swarovski in Austria rather than using less expensive Czech products. Even his settings were special, plated in rhodium, which was more costly but of higher quality than the chromium used in most costume-jewelry settings. Other Sherman settings were “Japanned” with a derivative of coal tar, which turned them shiny black, as if they had been lacquered. 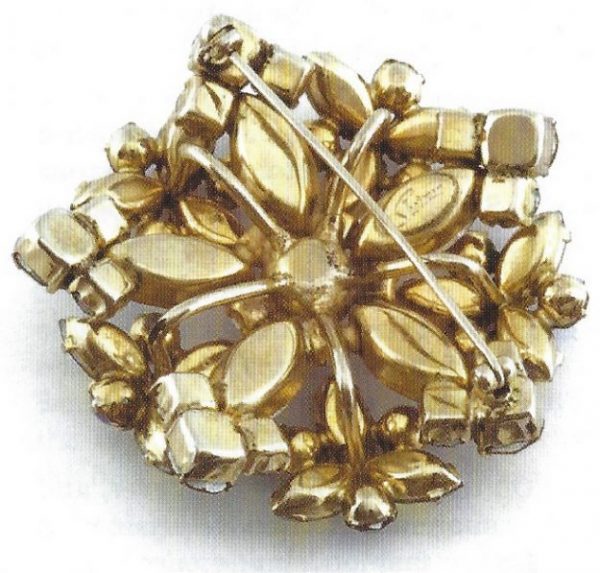 The back of this Sherman brooch shows its construction, in which struts radiate from a central ball to hold the setting together.

Hammond’s background is better suited to her current profession than Sherman’s was to his. “I grew up in England in a family of antiques dealers,” she says, “and I’ve always loved jewelry. When I was in high school, I was an entertainment columnist, so I’ve always been involved in some aspects of journalism.” Hammond’s writing credits include freelance articles for New Musical Express in London and two terms as the Poet Laureate of North York, a suburb of Toronto, where she lived in the 1980s. “I entered a competition and won,” she says matter-of-factly of this literary honor.

It was around that time that Hammond and her husband, Bill, opened Out of the Attic Antiques in Kitchener, a drive of about an hour or so southwest from Toronto. “We were dealing in Victorian to Art Deco decorative arts, furnishings, accessories, silver—everything, really.” The couple did a circuit of antiques shows, often in the United States, but it got to the point where “the jewelry started to take over,” as Hammond puts it. “People weren’t buying big, heavy antique dining-room suites anymore. But the jewelry, especially the costume, had become such a major force in the vintage world that I decided to focus on my passion.” 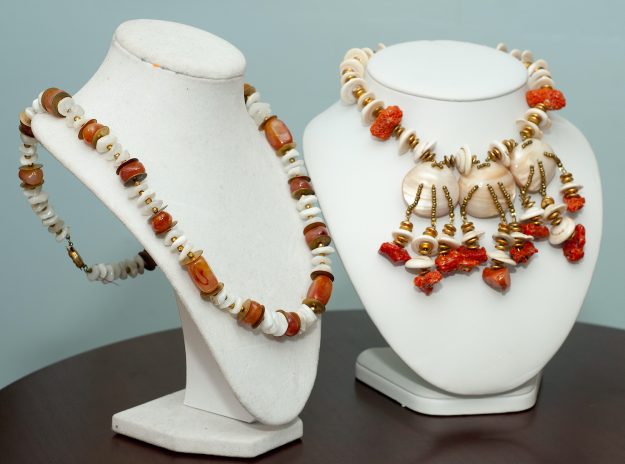 A pair of seashell-and-coral necklaces by Miriam Haskell, acquired on one of Hammond’s many buying trips to Florida.

Over the years, one of Hammond’s best places to buy inventory for her Canadian customers has been Florida. “Before Covid-19, we were going to Sarasota every year. We actually had a network of pickers from Michigan to Key West. We’d select pieces on the way down and then pick them up on the way home.”

Sarasota, Hammond says, was a particularly good hunting ground for American designer pieces. “It was sort of the culture coast down there, where they would have evening after evening of black-tie dinners on Longboat Key. The women would wear a piece of jewelry once—there’s no way they would wear the same thing twice! So all of this fabulous stuff ended up in the vintage, secondhand, and antiques stores along the coast.” Over the years, Hammond has picked up pieces by Schreiner, Weiss, Hobe, Hattie Carnegie, Miriam Haskell, and Stanley Hagler. All of these designers worked in the same general time frame as Sherman, producing costume jewelry laden with huge, opulent, over-the-top pearls and rhinestones, designed to be worn only once. “That kind of style never made it up to Canada,” Hammond says. “Montreal possibly,” she allows, “which was a little more cosmopolitan than Toronto at the time, but those brands just about never came up here.” 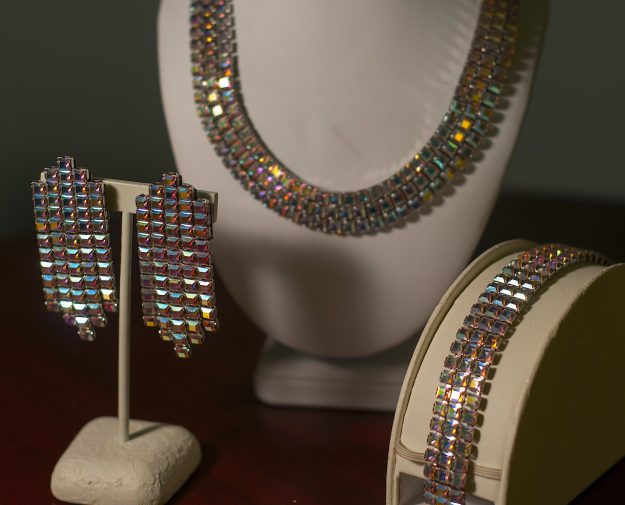 This Monet parure is an example of the type of vintage costume jewelry Hammond finds in the United States for her customers in Canada.

Instead, in the 1950s and ’60s, Canadian costume-jewelry enthusiasts selected from regional brands such as Bond Boyd, D’Orlan, Continental, Coro Canada (a spin-off of Coro New York), Butler 5th Avenue, and Sherman, which, Hammond says, was highly sought pretty much from the moment it was introduced.

“Gus Sherman was an amazing man,” Hammond says. “He had a little factory in Outremont, Montreal, and treated his employees like stars.” It was in that factory that those pampered Sherman employees plated his settings in rhodium, burnishing the company’s reputation for quality. “The timing was also perfect for rhinestones,” Hammond adds. “Women who didn’t have the money for diamonds were looking for elegance and glitz.” Sherman’s imported Swarovski crystals caught their eye.

According to Hammond, Sherman also understood marketing. “Sherman jewelry wasn’t sold in discount department stores,” she says. “Birks was the almost-exclusive jewelry retailer for Sherman, although his jewelry was also sold in upscale department stores such as Eaton’s and Simpson’s. And they never, ever put it on sale; they never had to. The brooches just looked spectacular, like they were handmade.” 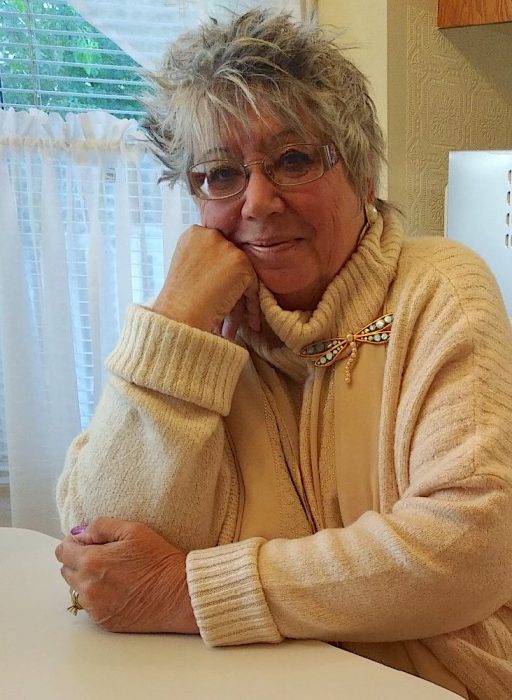 Another trait of Sherman was that all of its pieces were signed. “A lot of fabulous costume-jewelry designers did not sign their work,” Hammond says of most Canadian manufacturers of the 1950s and ’60s. “It was considered quite out of the question and inappropriate.” Apparently, fine jewelers of the day saw signed costume pieces as an attempt to make fashion jewelry seem more important than it actually was, proof that costume jewelry was a pathetic pretender to the authentic diamond-and-ruby-crusted throne. Today, though, a soldered Sherman signature tab on everything from the chunkiest brooch to the smallest earring is the definitive way to tell a Sherman from a wanna-be.

These days, the only way to find a piece of Bond Boyd, D’Orlan, Continental, Coro Canada, Butler 5th Avenue, or Sherman is to seek out a vintage dealer like Hammond. “They’re all gone,” she says of the small network of Canadian costume-jewelry manufacturers. “At least, I don’t know of any Canadian-based companies today that are manufacturing the quality of jewelry we saw back then. Almost everything now is made in China. We see all these big, glitzy, over-the-top, opulent Czech reproduction runway necklaces that are not of good quality. They look like what they are—copies of pieces that were made decades ago. There’s no love, no passion. It’s stamped out on an assembly line, put in a box, and shelved. You can see the difference, and the thing is, they’re not even that cheap.” 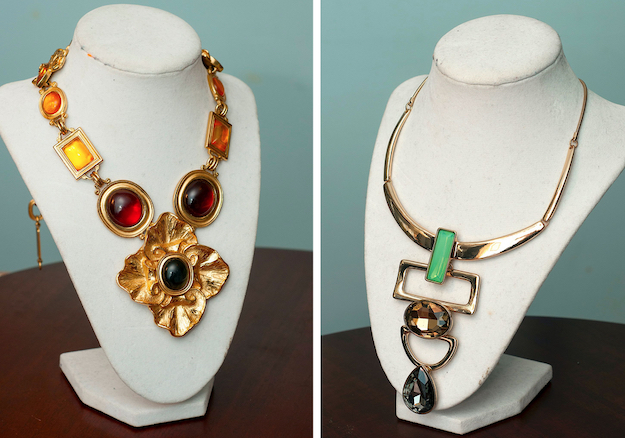 Curiously, what is cheap is vintage Sherman. “The demand for Sherman has all but disappeared,” Hammond says, “to the point where, I guess it was two or three years ago now, we sold our entire inventory of Sherman jewelry to the Sherman family. They had virtually none of his jewelry. People used to call us the ‘Shermanators’ because we had so much of it. Everybody knew that if you were looking for Sherman, you’d go see the Hammonds. So we divested ourselves of Sherman except for a few pieces—I kept three. And once we dispersed of all of that Sherman,” she adds, “with the help of our pickers we bought some amazing vintage Yves Saint Laurent and Oscar de la Renta runway pieces that were featured in magazines but never released to retail. Pieces like that are always interesting.”

Hammond’s inventory is unusually deep right now due to the pandemic and the early shutdown of several Hollywood movies that ensued. “The last movie we worked on was Guillermo del Toro’s “Nightmare Alley,” she says. “We provided jewelry to costume designer Luis Sequeira”—he was eventually nominated for an Academy Award for his work on the film. 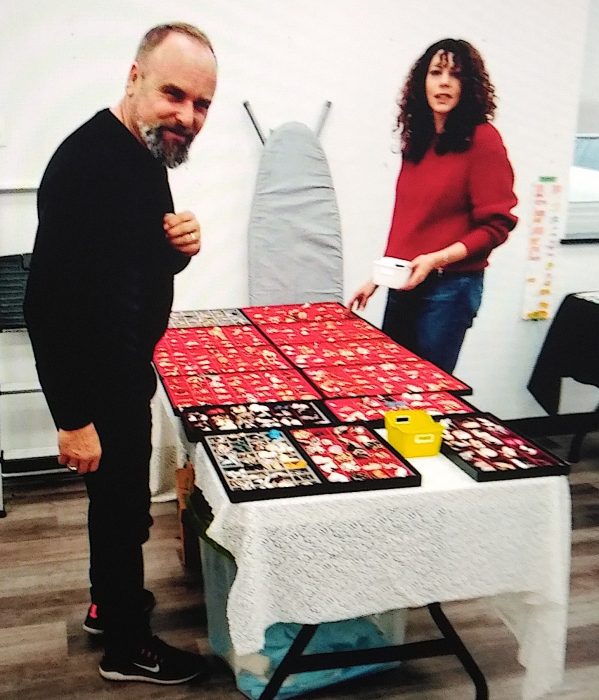 Academy Award nominated costume designer Luis Sequeira and a colleague pick out pieces for “Nightmare Alley” in November of 2019.

“We started in November 2019,” Hammond continues, “when we went to their design studio in Toronto to meet with Sequiera and his team. They picked out a gorgeous array of fabulous stuff. A lot of what they chose was for supporting players, but they also bought pieces for Cate Blanchett, Rooney Mara, some cufflinks for Bradley Cooper, that sort of thing. They gave us an order, so when we drove down to Florida in December 2019 for our usual buying trip, we had a list of items that the design team thought would be perfect for additional scenes in the movie. Unfortunately, as the world knows, in 2020 everything closed down because of Covid-19, and the cast and crew were back in California. So we were not able to meet up with them again. We haven’t participated in any antiques or vintage shows since March of 2020, so we still have all of this fresh inventory all waiting for new homes. Yves Saint Laurent, Oscar de la Renta, Hattie Carnegie, Miriam Haskell—you name it, we have it. You wouldn’t want to wear some of the pieces to the supermarket or Walgreens,” she adds, “but as my grandma used to say, if you got it, flaunt it.” Nice!

(To learn more about Valerie Hammond, visit Val Knows Vintage on Facebook or Instagram. You can read a recent article of hers for Barnebys here.) 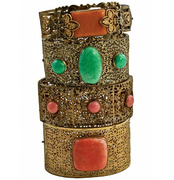 Costume JewelryThe term “costume jewelry” was coined in the 1920s, but jewelry and ornamen…