Yakity-Yak: 60 Years of Teeth That Talk Back 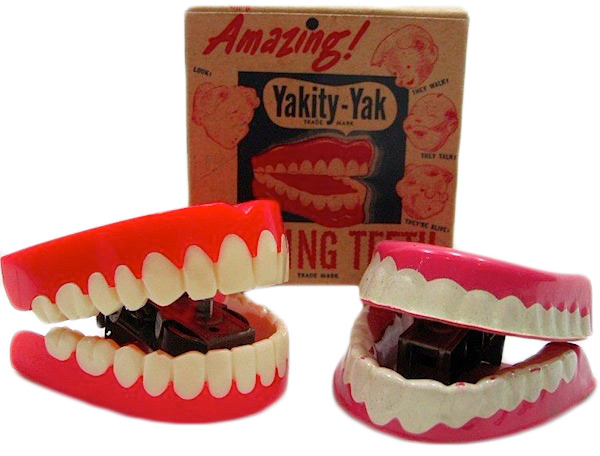 There’s something to be said for being easily amused. In the 1940s, toy inventor Eddie Goldfarb saw an ad for a false-teeth holder called a “Tooth Garage” and he started cracking up. In his head, he saw a pair of dentures, chomping and sputtering down the road like a car, and parking on their own.

Goldfarb took his invention to toy kingpin Marvin Glass, who showed it to his buddy, Irving Fishlove, of Chicago’s famed novelty concern, H. Fishlove & Co. That sort of ridiculous and obvious slapstick humor is exactly the sort of thing Fishlove, who also introduced latex fake vomit to the world, lived for.

The Yakity-Yak chompers made their official debut in 1950. “Amazing!” reads the box. “Look! They Walk! They Talk! They’re Alive!”

At the time, America was enjoying a Golden Era for toys and games, thanks to the wartime invention of plastics and injection-molding, and these men were turning the industry on its ear. Goldfarb went on to invent games like Battling Tops, Kerplunk!, and Shark Attack!, as well as novelty items like an egg-laying toy chicken called Busy Biddy and the Giant Bubble Gun. Marvin Glass & Associates brought the world Mousetrap, Operation, and Rock ‘Em Sock ‘Em Robots. Fishlove, meanwhile, produced some of the highest-selling lowbrow gags in the business. 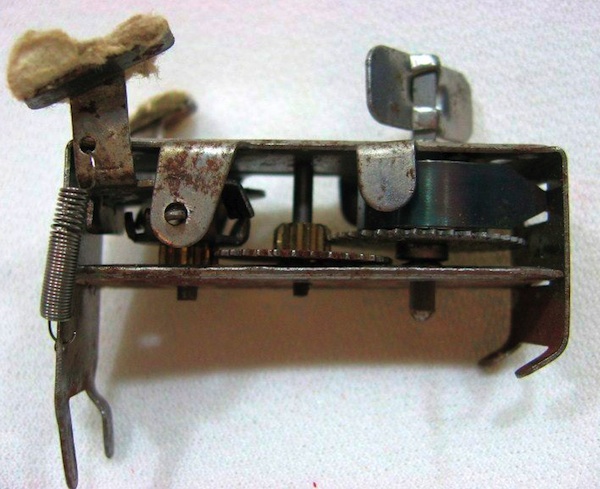 What’s making all that ruckus? A little clockwork motor, which Fishlove dubbed a “spring device to activate a novelty.”

“The cool thing about Yakity-Yak is that it started just from seeing an ad,” says Mardi Timm, who with her husband, Stan, has one of the foremost novelty-gag collections in the world. “These guys—Goldfarb, Fishlove, and Glass—were such geniuses. They would see something, and immediately turn it into an idea.”

If you’re looking for an intellectual, rational reason why chattering teeth have been such a consistent seller and are repeatedly knocked off by overseas toy makers, there isn’t one. They look like dentures, which are inherently funny. They can startle the unsuspecting. And they’re right out of a dentistry nightmare, disembodied teeth and gums talking, shivering, running, and chomping on their own. It’s the stuff of late-night horror films and Saturday-morning cartoons.

“Some people say, ‘What’s so funny about that?'” Stan says. Apparently, plenty. Yakity-Yak was a favorite gag of the ’50s magicians and comedians who popped up on early television variety shows, including Ernie Kovacs, Red Skelton, Perry Como, Jimmy Durante, and Milton Berle.

And talking teeth still show up on new YouTube videos, their startling, disembodied rattle delighting children born in the Internet era. Mardi insists those who don’t get it are just plain wrong. “I mean, it’s been around for, what, 60 years?” 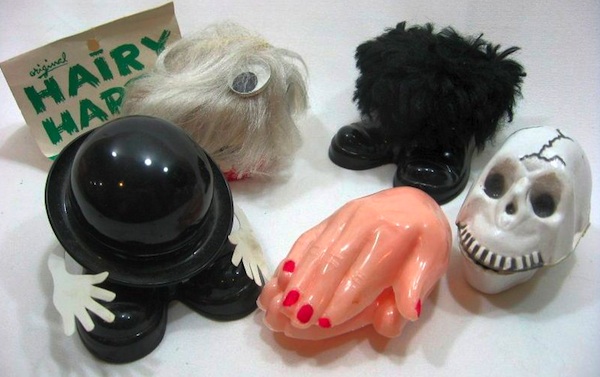 Like most other Fishlove jokes (girlie glasses come to mind), Yakity-Yak was meant for men. It’s not that women don’t have a sense of humor, Mardi explains, as much as their humor is more refined.

“Guys think everything is funny,” she says with a laugh. “Well, they do! The silliest stuff, too!”

“Yakity-Yak was a favorite gag of Ernie Kovacs, Red Skelton, and Milton Berle.”

As an example, Stan recently felt compelled to buy a denture-soaking container he found. “It wasn’t a Tooth Garage. It’s actually a Tooth Motel,” he says, starting to chuckle. “It has upper rooms for the uppers, and lower rooms for the lowers!”

The Timms say Fishlove’s particular genius wasn’t invention as much as identifying these brilliantly simple gag ideas that would catch on like wildfire, their day’s version of a Facebook meme (Hipster Cop, anyone?). And then, of course, he’d turn those gimmicks into money-makers.

Part of Fishlove’s formula for success was to make the most of a good thing. For example, the patented clockwork motor used in Yakity-Yak, imported from German makers of tin toys, was also employed in a chattering plastic skull called Mr. Bones (a good way to startle Halloween trick-or-treaters), a walking hat called Schmoo, and two even more frightening walking wigs called Beatnik and Hairy Harry. Zombie toupees? Be still my heart! 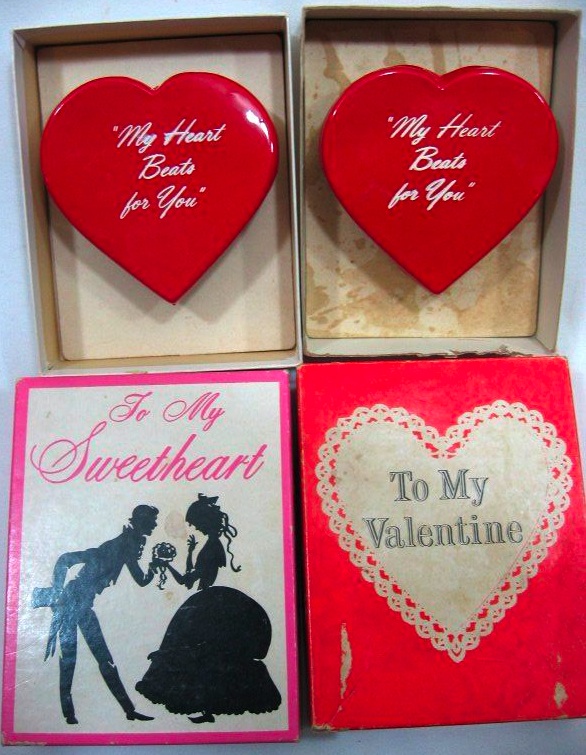 Vintage gag box valentines, for that special sweetheart with a sense of humor.

Speaking of racing hearts, that was one of the most popular of Fishlove’s toothless chattering gimmicks. The other was a pair of clapping hands. Both were used in gag boxes, which were essentially kinetic, 3D cards that read “Congratulations,” “Bravo,” or “You have my heart.”

Stan says he uses the clapping hands often when he performs his magic act for kids. “I say ‘I want everybody to clap,’ and then I show it to them,” he says. “And of course, it’s so ridiculous-looking that it’s funny.”

In the ’50s, the Jockey menswear company became smitten with the beating hearts, and adopted them for its famous Valentine promotion. The company offered Valentine-themed gift boxes packaging a beating Fishlove heart bearing legends like “My Heart Pants for You” along with Jockey boxer shorts, socks, or ties. “Women just loved buying those things for men,” Mardi says. 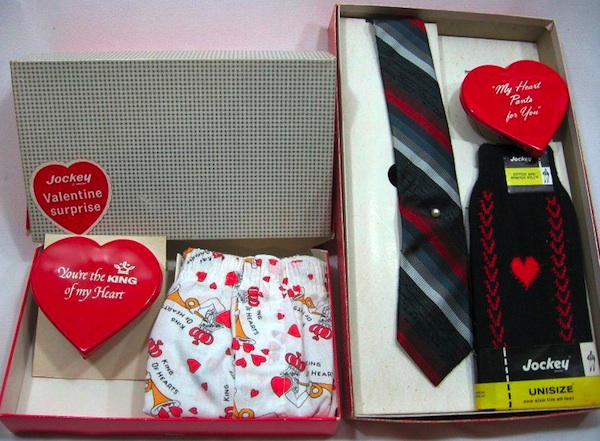 Vintage Jockey gift boxes with wind-up Fishlove hearts for Valentine’s Day. Women loved to give these to their favorite men, a subtle way to make sure they had fresh shorts and socks, too.

For one year in the 1960s, the Jockey company decided to forego the good ol’ wind-up hearts for new-fangled battery-powered light-up tickers. But, according the Timms, the joke was on Jockey. Because the packages were assembled in the summer, by winter, when the Valentine promotion got under way, the batteries had drained.

“There was battery acid all over the boxer shorts!” Stan says. “Everybody brought the gift boxes back because they didn’t work. Jockey quickly went back to Fishlove and bought the mechanism, and they used it for another 30 years.”

Perhaps the silliest thing of all is that one of the Yakity-Yaks, which were originally marketed for less than a dollar, recently sold for more than $200 on eBay. And that price was without the box. 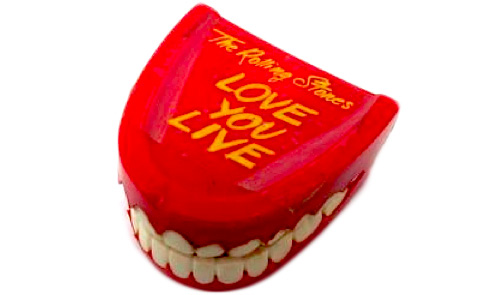 One sticker turns a cheap, common product into an eBay phenom.

“Why would anybody pay that much for something so common?'” Mardi asks. “Well, the reason is that this particular set of teeth was used as a promotional item for the album ‘Love You Live’ by the Rolling Stones. That’s what made it different. It was a normal Yakity-Yak, but it had a Rolling Stones label on it.”

Wind-up-teeth lover that he is, this time Stan managed to show some restraint, thanks to the steep price. “Needless to say, I did not buy it!”

(All photos, except for the “Love You Live” promo item, were provide by Mardi and Stan Timm.)

How Your Grandpa Got His LOLsThe Inside Scoop on Fake Barf