The Inside Scoop on Fake Barf 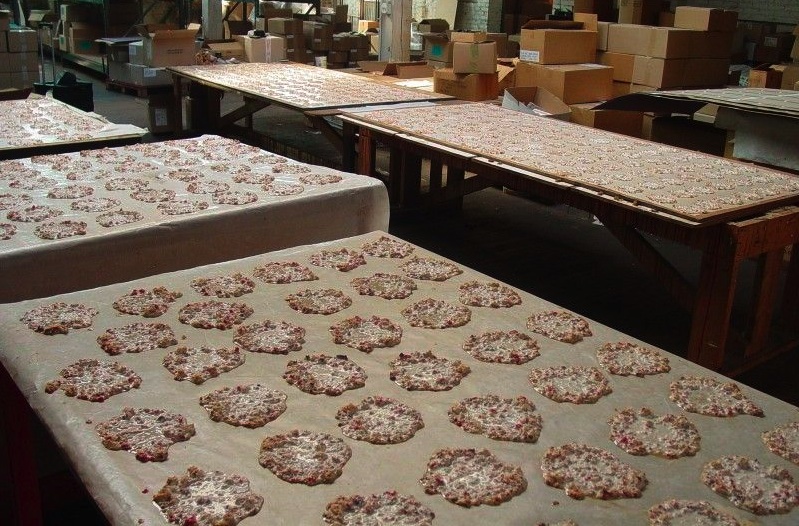 Have you ever stopped to contemplate the existence of rubber barf? It opens up enough philosophical quandaries to make your head spin. Who would ever think of such a thing? Why would he feel the need to manufacture it?

Fortunately, Stan and Mardi Timm, the foremost experts on famed novelty company H. Fishlove & Co., have the answers to these vexing questions. The couple even got a personal tour of the factory where “Whoops,” the original fake vomit, is still churned out.

Chicago gag kingpin Irving Fishlove, son of the company’s founder, loved nothing more than a good prank—particularly when the prankster gets a laugh at the expense of his unwitting target. So when presented with the first prototype of latex puke in the late 1950s, he howled with laughter and declared that he loved it.

Not only did Irving Fishlove buy the idea to mass-produce and sell, he also took matters into his own hands. His son, Howard Fishlove, told the Timms about coming home as a schoolkid to find his kitchen counter covered in various types of fake barf. Turns out, Dad was so excited about this upchuck gag, he was experimenting with his own formulas of brown or yellow latex mixed with chunky bits of colored foam. “He told us it was the most disgusting thing he had ever seen,” says Mardi Timm. 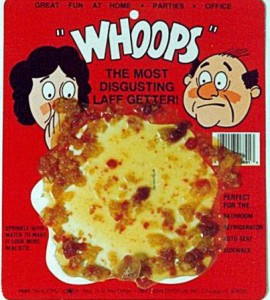 How this invention got tossed at Fishlove’s feet, though, is a matter of debate. The Timms explained that there are two creation myths around fake throw-up.

First, you have to understand that Fishlove was a collaborator with Marvin Glass, the famed toy designer who, with his company, devised some of the most beloved toys and board games of the 20th century, including Mouse Trap, Operation, Rock ‘Em Sock ‘Em Robots, and Lite Brite, produced by major companies like Hasbro and Ideal. Another of Glass’ claims to fame was the invention of Yakity-Yak talking teeth, an idea he sold to H. Fishlove & Co.

One story goes, “A fellow by the name of Ayala worked at Marvin Glass and Associates,” Stan says. “He was walking down the street and saw somebody’s vomit on the street, and he did a double-take. First, he said, ‘Yuck!’ And then, ‘Oh, what a great gag item!’ He went to work, made up one with some latex, and presented it to his boss. Glass didn’t care for the idea. In fact, he was rather disgusted.

“One day, Glass was showing some jokes to Irving Fishlove, and Fishlove wasn’t particularly interested in any of them. All of a sudden Ayala burst in, plopped down this latex fake barf, and Fishlove cracked up. Glass suddenly thought it was funny, and that’s how it got started.

“The other story is that there was a fellow by the name of Ray Suggett, from Arkansas,” Stan continues. “He made prosthetics, like false legs, et cetera, for people who were injured in the mines. He also made joke items for Fishlove. One day some latex plopped on the ground. It looked like barf, and he didn’t particularly like it. He thought it was kind of ridiculous, but he didn’t throw it away.”

“Not long after that, Irving Fishlove stopped by. He asked Suggett if he had any new gags. Suggett opened up the drawer and took out this fake vomit. Fishlove was very impressed. And so goes the second story.”

“All of a sudden the toy designer burst in, plopped down this latex fake barf, and Fishlove cracked up.”

The Timms think the Glass story is the more likely of the two to have led to the scene young Howard encountered of Irving experimenting with his own blown-chunks mixtures in the family’s home kitchen. Whichever story is true, rubbery puke was an immediate hit with jokesters all over the U.S. when it debuted in 1959.

“It was an instant success,” Stan says. “It’s not surprising, because it meets all the criteria of a good gag. It’s very cheap to make, so you could make a decent profit on it. It sells for a very cheap price, so it’s easy to sell. And people just went after it. The numbers we hear tend to vary, but the story is it initially sold about 100,000 units a year, which, at the time, was a lot. Fishlove did very well with it.”

In fact, Irving Fishlove loved this joke so much, he used it himself all the time, even when he was dining at a posh, five-star restaurant.

“When Irving’s daughter, Dianne Stone, visited our Fishlove museum, she told a story about the time when she was a teenager and the family went to this very exclusive restaurant. Everyone was dressed incredibly fancy,” Stan explains.

“Of course, Irving decided to pull the gag. He started heaving and retching, and then he threw a ‘Whoops’ fake-barf patty down on the floor. Right away, the waiter was like, ‘Oh my God, we’re sorry, Mr. So-and-So!’ They were thinking, ‘This poor man!’ Then, he told them what had happened. She said it was one of the most embarrassing moments in her life.” 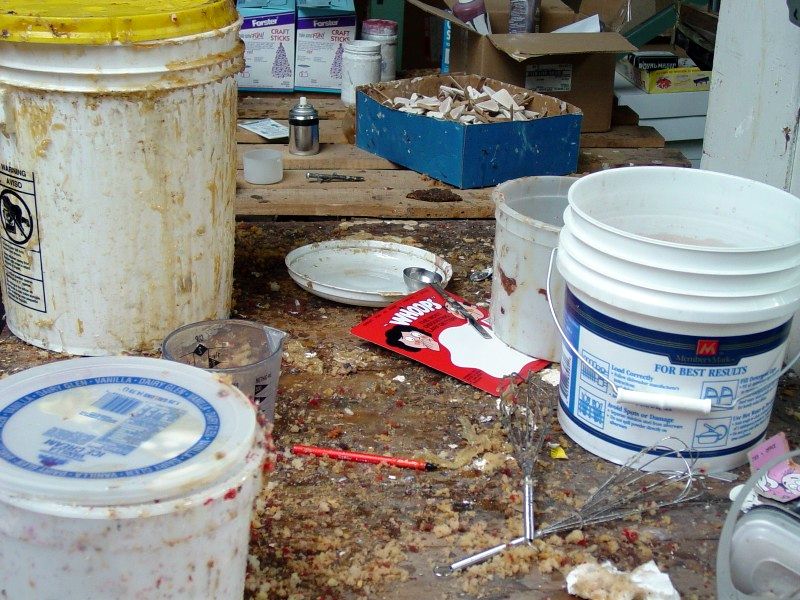 H. Fishlove & Co.—and now Fun Inc., which bought the company in the ’80s—has kept a lid on the formula Irving came up with, the same way Coca-Cola guards its recipe and KFC protects its special herbs and spices.

“It’s probably one of the greatest gags of all time.”

“It is a secret recipe,” Mardi says. “But I think we know what’s in it. It’s got foam pieces cut up, and it’s got latex. But the actual recipe, nobody outside the company knows that.”

The Timms have close ties to Fun Inc., who invited them to tour the Chicago factory where the fake upchuck is crafted by hand.

“We discovered this room on the upper floor that was filled with what looked like a bunch of chocolate-chip cookies,” Mardi says, “But it wasn’t cookies. It was just tray after tray after tray of this fake vomit.” 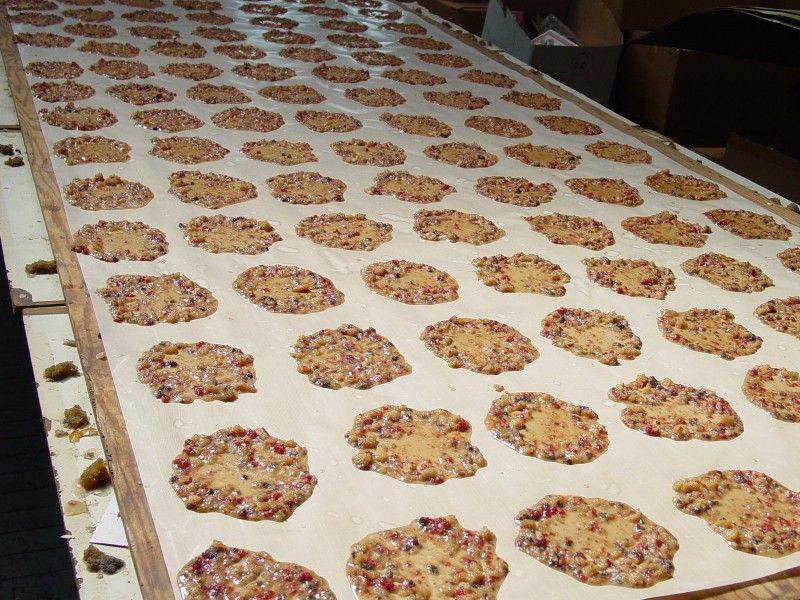 Puke “cookies” curing in the sun at the Fun Inc. warehouse in Chicago during the Timms’ tour.

These “cookies” were 500 pieces of fake barf, spread out as far as the Timms’ eyes could see, “curing” under the skylights in the Chicago summer sun. The secret formula is mixed up in a big bucket, and the workers ladle it out, “like you make pancakes,” Stan says. “Each one comes out a little different, of course, but that’s okay.”

The latex is initially white, but after a day or so, dries into the perfect puke-yellow. “Then, they attach it to a card that says ‘Whoops’ and sell it,” Stan says.

Of course, now, the original “Whoops” has many gnarly competitors. “One of the better ones is called Glop, made by the famous S.S. Adams joke company.” Others made across the Pacific include Fake Barf and “Oops.” 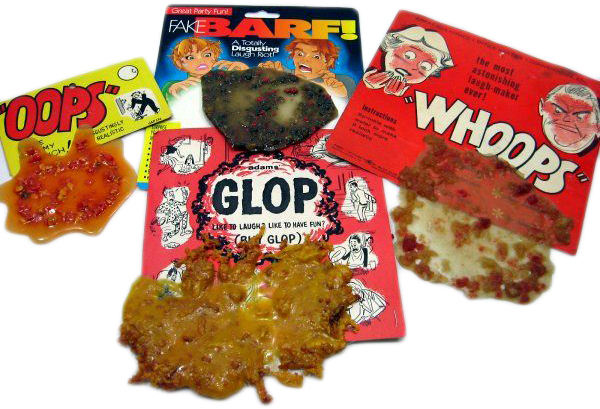 “There are all sorts,” Stan says, “In fact, I was looking on the Internet, and there’s even fake barf that comes in a canister. Apparently, you can pour it out, so it looks very realistic.

“Speaking of realism, the ‘Whoops!’ card states—and I’ll read this for you—’Instructions: sprinkle with water to make it look more realistic.’ After all, it’s barf, so it should be wet, right?”

Regardless of its myriad competitors, “Whoops” has remained more or less unchanged in 50-plus years.

“Why mess with a good thing?” Mardi says. “It’s probably one of the greatest gags of all time because it just spanned all these decades and it’s still going. It works well. It’s easy to make, cheap to make, and nobody knows the formula because none of the others look like it. And there are lots of other companies that try to make the same thing, but they’re not as good. The best one is really the original ‘Whoops.'” 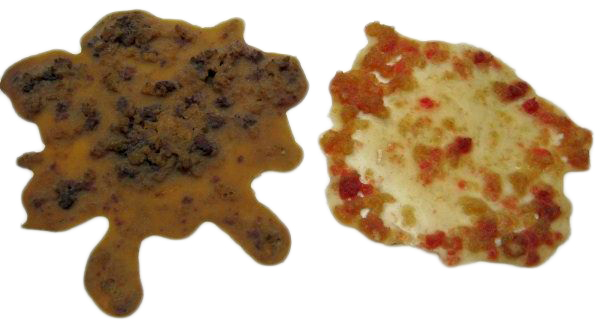 An old version of “Whoops” rubber barf next to a newer model.

(All photos, except for the image from Google Street View, are courtesy of Stan and Mardi Timm, who just may have the largest novelty collection in the world. See more of their collection on their web site, Timm Stuff.) 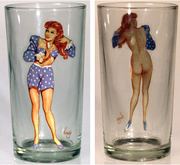