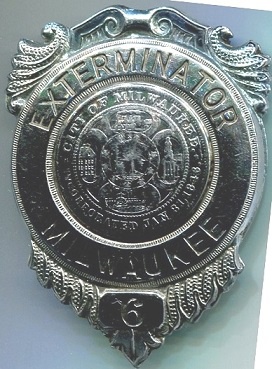 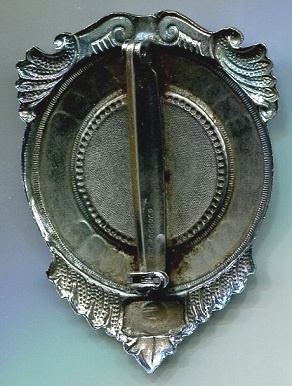 I recently picked up this Milwaukee City Exterminator Badge. The badge style is the old eagle top type of the early 1900’s health department. The eagle top has been professionally removed. The pin assembly with the patent number on the back could not possibly have been made before 1937. Also the pin is not a replacement as there are no traces of older pin mountings. The job title of exterminator is a new one to me and I have not been able to find any mention of it anywhere. My guess would be that the influx of war workers to Milwaukee at the beginning of WWII also heralded an invasion of rats and roaches. When the need for exterminators was recognized the small number of badges needed were made from the unfinished badges remaining from previous issues. To distinguish these badges from the older types the eagle top was removed, the badges were properly inscribed and the pins were mounted. These exterminators would have been part of the Milwaukee City Health Department and eventually became the “Pest Control Section” of the Health Department. Later on the city Housing Authority was established with a “Rodent Control” office. By then however the extermination duties would have been contracted out to private pest control companies for city owned properties and private land owners would have done the same to comply with city ordinances and court orders.
As a kid in Milwaukee in the 50-60’s we lived next to an old wood frame four apartment rental building with rotting siding. It was also an ideal home for rats. My father would see them every morning when he went to work and called the health department several times to no avail. Being an impatient sort he finally bought his own rat poison, jumped the fence and solved the problem with out the benefit of a badge.