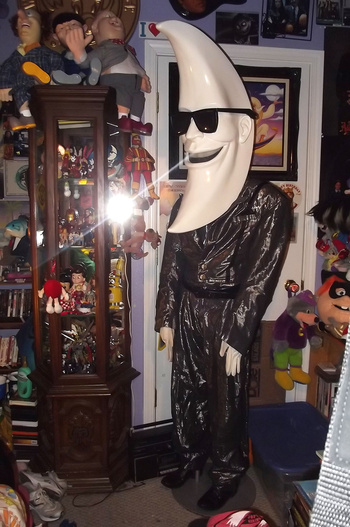 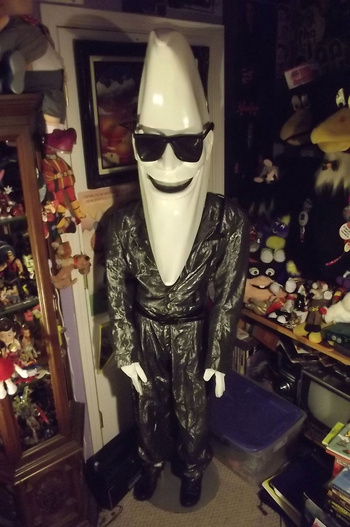 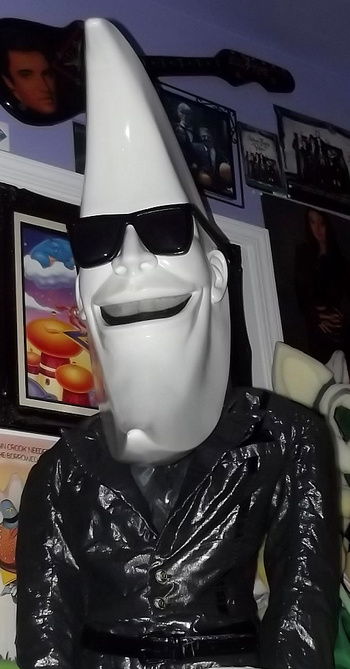 This is one of my favorite pieces in my collection- an original Mac Tonight walkaround costume from McDonald's. The costume consists of the head, gloves, satin undershirt, pants and a jacket with padded shoulders. Displayed, he's about 7' tall!

This costume was used by McDonald's in the 80's and/or 90's as a store walkaround character to greet guests.

The head still has the original sunglasses, which actually have awesome semi-translucent purple lenses that my camera doesn't pick up. They're removable and fold just like real sunglasses and are held on by velcro behind his ears and a string attached to both arms. Inside the head is an adjustable head brace and vision is from his mouth. He does have (blue) eyes under his sunglasses.

The rest of the costume came from someone who's dad won it in a McDonald's corporate auction back in the 80's/90's, which is awesome (I love finding out the history of items I add to my collection!). The suit was made for someone very tall and skinny. It features Mac Tonight logo buttons on the shoulders and two on the front. The pants have a zipper and clasp (although both are broken- the belt shown here is not part of the costume, but the pants won't stay up without it). The shoulders of the jacket have padding sewn into them to give it that wide, squared look that's iconic of Mac. The undershirt is made of a silver satin fabric and buttons up on the front and wrists.

In my years of collecting Mac Tonight memorabilia, this has been one of the hardest items to track down. A lot of McDonald's only received the head and used one of the Mac Tonight windbreaker jackets with it. Researching through old photos, I learned that a lot of the full costumes were slightly different (but all made from the same fabric with the same padded shoulders), which leads me to believe this wasn't a mass-produced item.