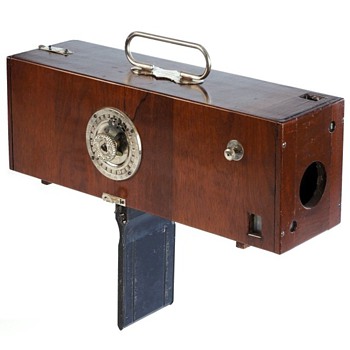 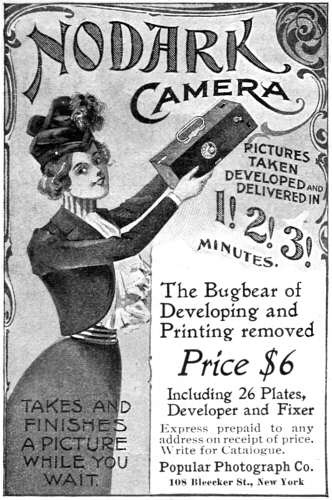 I’m not much of a box camera collector, but the 1899 Nodark (Popular Photograph Company. NY) is somewhat special and handsome for being a solid body camera. Since the beginning of photography, makers pursued the dream of building cameras that developed pictures in the field. The earliest cameras were based on the laborious and toxic "wet" process, which imposed limitations on the photographer.

Invention of the dry-ferrotype process in the 1890s changed this. It allowed makers to create a new generation of cameras affording photographers unparalleled freedom. The Nodark represents one of the first cameras designed to take advantage of the newly invented dry-ferrotype process. It was a simple box that made 2½ x 3½ inch images. Price was $6 (about $162 in year 2012 currency!).

The Nodark's unfussy design holds twenty-six (26) plates. Its polished wooden body features two reflex finders, carrying handle, and a nickel plated dial to change ferrotype plates. According to the instruction sheet that came with the camera, development was relatively straightforward after an exposure was made:

“Fill the developing chamber with liquid No.1, and fix the chamber on slot on bottom of Camera-(see that shutter in chamber is open), pull out slide in bottom of Camera, and plate will drop into the chamber. Push slide in Camera back in place, CLOSE the shutter in chamber and remove chamber from Camera. Slightly shake the chamber, and in thirty-five seconds pour liquid back in bottle No.1, and without opening the chamber, fill it with liquid No.2. This will FIX the picture in from twenty to thirty seconds.”

After admiring the image, the photographer could shoot a new picture by turning the nickel-plated dial on the side of the camera to position a fresh plate. Because the entire exposure and development process was performed without a darkroom, the "Nodark" moniker (No Dark) represented more than just a name.

Of the many Nodark references, the little known 1900 advertisement from the Ladies Home Journal shown here is my favorite. A delightful portrait of a well dressed Victorian woman proudly holding a Nodark in the air graces the ad. The woman's gay attitude and neat attire supports a theme that the camera was indeed convenient, clean, and easy to use.

Not surprisingly, the (messy) developing tank usually did not appear in the ads.