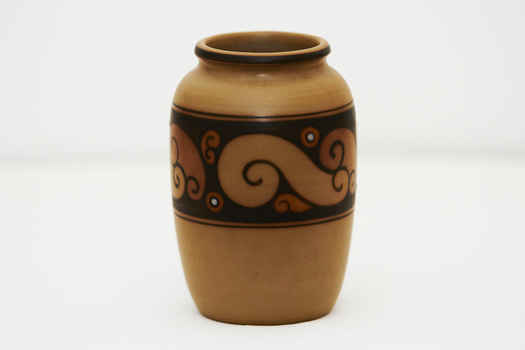 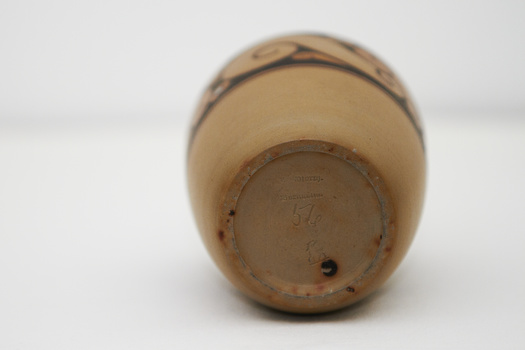 This vase (height 12.5 cm) belongs to the kind of unglazed pottery which is the most well-known type of L. Hjorth pottery. It is an early example of the 'Skønvirke' (the Danish version of art nouveau) style produced at the Hjorth Pottery, unglazed and with a very simple painted pattern with little white 'beads' of glaze and a sparing use of colour. I estimate that it dates to 1915-1920. Later on, this type of pottery degenerated (in my opinion!) into the far more common type with more intricate patterns (often birds or flowers) and somewhat garish colours. You will find lots of it on markets etc., but these early items are not so common.

When Hjorth first introduced this kind of pottery (around 1910) it created quite a stir as it was first considered very odd with its lack of glaze, but it became popular later on and nowadays what is mostly associated with Hjorth. The Hjorth Pottery had its own clay pit with very fine clay needed to actually pull this look off.

Mark: 'L. Hjorth' in Gothic lettering (indicating that this is an early-20th century vase). Moreover, 'Bornholm'' (location), the number 56 and a stag (the Hjorth mark).