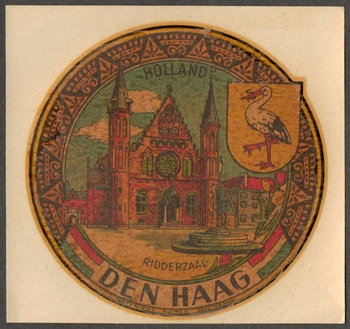 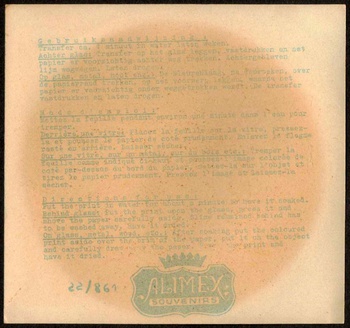 This is a 1950's travel decal which could be used for applications on glass (car windows), metal, wood, or other hard surfaces (suitcases). There is a cellophane type cover sheet to protect it from being scratched before use; it has been removed but has adhered to the color print because of age.
-- Ridderzaal (Hall of Knights) / Den Haag (The Hague) / HOLLAND --
The Ridderzaal is the main building of the 13th century Binnenhof in The Hague, Netherlands. It is used for the state opening of Parliament on Prinsjesdag, when the Dutch monarch drives to Parliament in the Golden Carriage and delivers the speech from the throne. It is also used for official royal receptions, and interparliamentary conferences.
The Hague is the seat of government in the Netherlands and the capital city of the province of South Holland.
The instructions for use are printed on the reverse in Dutch, French, and English. - Copyright and made by Alimex Souvenirs, Amsterdam - 22/861

Do Not Feed Bears US Forest Service...
$28
See all