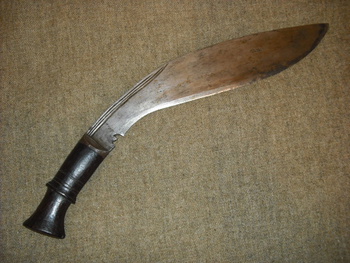 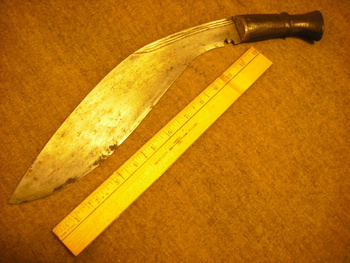 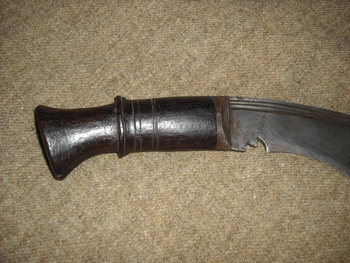 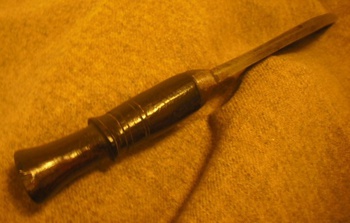 Before posting my next firearm, I decided I’d show off this kukri, as it’s the only other item I have that came from that palace arsenal in Kathmandu, Nepal. The kukri is a traditional weapon and tool of the Nepalese people, and the signature weapon of the Nepalese army and the famous Gurkha soldiers employed by the British for 200 years. The Brigade of Gurkhas have enjoyed a fierce reputation, in part because of the kukri, even as recently as the Falkland Islands War.

This kukri has a hand forged blade with a hand carved dark hardwood handle. It’s unmarked and it’s hard to estimate the age, but the seller believed likely the end of the 19th Century to WWI. It weighs in at 1 pound, 6 ounces (.623 Kilo) and 17 ½” (44.45 cm) overall. The back of the blade is about 3/8 inch thick, and cutting edge is about 12 inches long. It’s designed for chopping and slashing, and is nicely balanced for the job. When you hold it you just know you could give something (or someone) a pretty darn hard whack with it. The traditional notch at the base of the blade may have practical and/or symbolic significance. Some say blood or sap would collect there and drip off the blade instead of running down the handle. Others say this is the symbol of Shiva, a Hindu deity. I’ve heard other more graphic explanations as well.

Since this is the last time I’m mentioning the Lagan Silekhana Palace arsenal, I thought I’d add this YouTube clip to give you an idea of the extent of that haul: