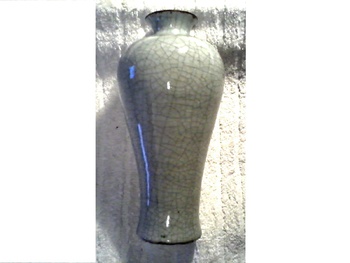 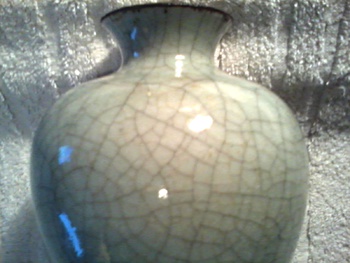 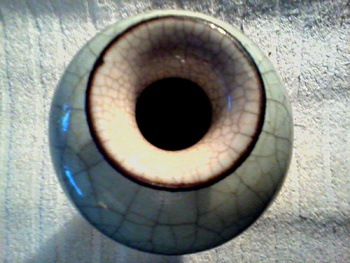 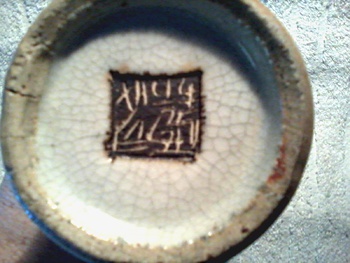 I'm always hoping for another really nice authentic piece of Chinese porcelain. The fact is most of these pieces are purely decorative. Gotheborg's site says the brown etched marks were used from about the 19th to the early 20th centuries. Some may be earlier but seem rare. Most are late 20th century Chenghua Nian Zhi meaning: "Chenghua Period Made" and are just part of a piece's decoration. There's always that bit of doubt so I check with the experts on the Asian art forum just to be sure. It's a nice piece in a pale crackled green glaze. I love the 9 1/2 " "Mei Ping" shape. Very elegant ! -Mike-

NOTE: Finally got an opinion from " Collecting" chinese-antique-porcelain.com. Peter said "This is a Fangge vase with a badly written "Chenghua" mark. As the bottom is the only thing that can be used for judging age with this otherwise undecorated vase, we can only assume that it is late Qing dynasty (1644 to 1912) or Early Republic (1912-1928)"..... So it's not really old (turn of the century) or extremely valuable but it is authentic and not a reproduction. -Mike-

Exactly when this kind of mark first started to be used is actually not known. Traditionally the "Guangxu" period (1875-1908) is given as the starting point, and that assumption has been followed by us in suggesting dates for individual pieces here and on other places on this site.
When looking for reference pieces of porcelain it seems like the feature of adding brown etched sections or borders to the enamel decoration begins at the earliest during the Tongzhi 1862-74 period. From this period I have seen vases with enamels and broad bands of brown etched decoration in the shape of roof tiles, adding a three dimensional aspect to the decoration.