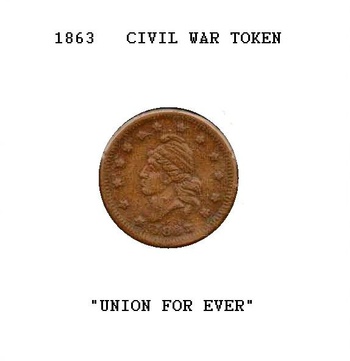 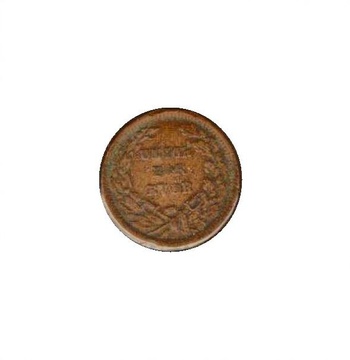 This is a Civil War token dated 1863 / patriotic type token / Token #LH-1
Front - Liberty Head / Back - "Union For Ever" in wreath
*** Civil War tokens are token coins that were privately minted and distributed in the United States between 1861 and 1864. They were used mainly in the Northeast and Midwest. The widespread use of the tokens was a result of the scarcity of government-issued cents during the Civil War. Civil War tokens became illegal after the United States Congress passed a law on April 22, 1864 prohibiting the issue of any one or two-cent coins, tokens or devices for use as currency. On June 8, 1864 an additional law was passed that forbade all private coinage. Civil War tokens are divided into three types—store cards, patriotic tokens, and sutler tokens. All three types were utilized as currency, and are differentiated by their designs.
Over 10,000 varieties have been recorded.