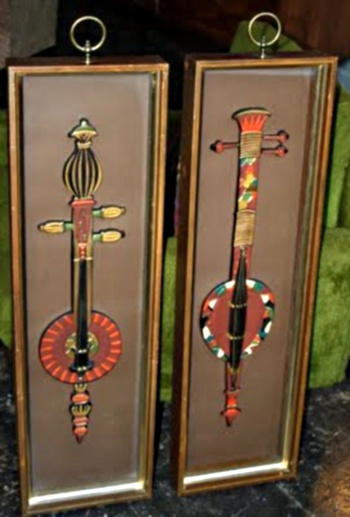 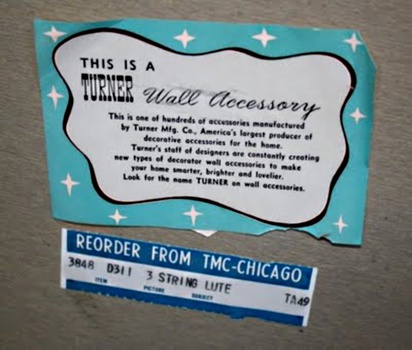 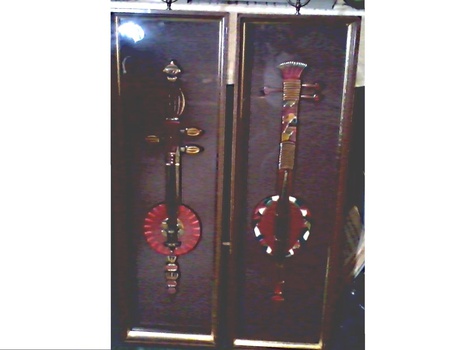 Picked these up at Salvation Army yesterday. Very nice and undamaged. They are even signed "Property of........ 1979. on the back for some reason. I would guess to guard against theft. They were probably made in the 60's or early 70's since the company was out of business by 75'. It's a pair of fantasy instruments in a 10" x 34" x 2" shadow box frame titled "3 String Lutes" on the back tag. I think they are injection molded plastic of some kind and then painted creating a nice 3D effect. They are quite light weight for their size. I couldn't believe I found the exact same pieces on the " mid2mod "site being discussed in their blog. Not very valuable but still very cool looking and vintage ! I must admit I borrowed their pictures since they would be much better than mine. -Mike-

The Turner Manufacturing Company was, at one time, the largest producer of affordable priced decorative art and mirrors in the United States. The company went out of business around 1975. They were located on the west side of Chicago on Ogden street. It was terrible the way they treated their employees when they went out of business. the employees showed up for work and found the doors/gates chained and security guards on alert ! One of the managers bought the "molding" machines etc. and moved the operation to Los Angeles. Their wall art was sold in department stores and "five & dimes" and is still relatively easy to find. Much of what they produced were prints of "Old Masters," but they also manufactured some very cool modern pictures.