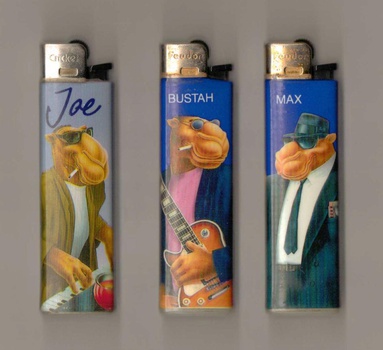 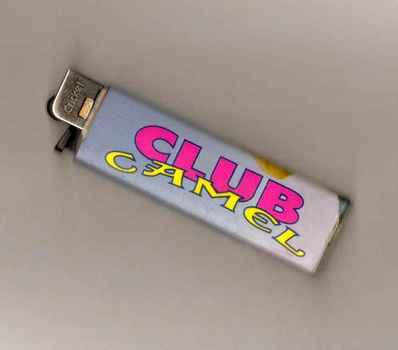 - Three "Camel" advertising disposable lighters from 1991-1992
- The first one is a Cricket brand with the "Joe Camel" wrap label, back is shown in picture two "Club Camel" - The other two are Feudor brands made in France and depict members of the fictional Blues band, the "Hardpack" - Bustah plays the guitar and Max plays the harmonica (these two only have label on front). The other two members of the band were Floyd on the saxophone and Eddie on the drums (don't have them). Although "Joe" wasn't an official member of the "Hardpack" band, he occasionally played the piano with them.
** Joe Camel was the advertising mascot for Camel cigarettes from late 1987 to July 1997, appearing on products, in magazine advertisements, billboards, and other print media.
- R. J. Reynolds, looking for an idea to promote Camel's 75th anniversary, re-discovered Joe in the company's archives in the late 1980's. Joe Camel was actually born in Europe. The caricatured camel was created in 1974 by a British artist, Billy Coulton, for a French advertising campaign that subsequently ran in other countries in the 1970's. - Joe Camel first appeared in the U.S in 1988, on materials created for the 75th anniversary of the Camel brand, and his bandmates came along later in the early 1990's.