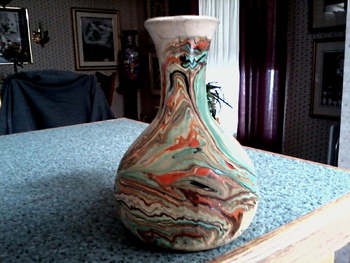 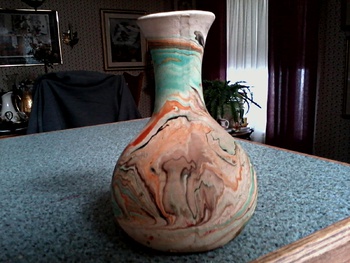 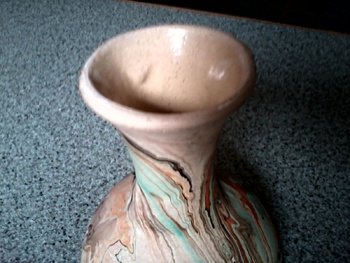 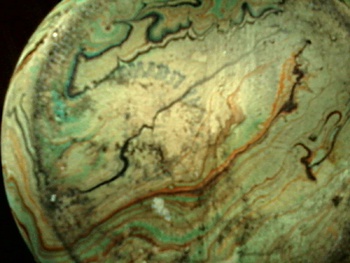 Another nice find from the "West Lake Historical Society" yard sale. This little Nemadji Pottery bottle vase with it's wonderful swirl of colors that look like agate. The outside is not glazed but the interior is so it's water proof. There is just the faintest stamp on the bottom that says NEMADJI in capital letters. Some pieces also have the Indian head as well but this one does not. -Mike-

Nemadji pottery comes from the Arrowhead region of Minnesota. It has never actually been made by native Americans, but is said to be reminiscent of the style and colouring used by them. It has come to be thought of by many as 'Indian pottery' although it has no connection with the Ojibway tribe. It was originally made from clay dug from the banks of the Nemadji river.
Nemadji Pottery was started in 1923 in Moose Lake. It produced floor tiles for wide distribution, mainly in the west and north-east, and decorative items intended primarily for the tourist trade. The painted decoration was distinctive, and the style has remained the same to the present day.
With a change in ownership in the early 1970s the company moved to Kettle River. Tile production ceased after another change of hands in 1980.
A scrap of paper is to be found in each piece bearing the following legend ...

Twenty-five thousand years ago the ice sheet of the glacial age covered the land. It is now known that the primitive ancestors of our present Indians lived here when the great ice sheet started to melt and retreat. Clays of various shades and composition were made by the glacial ice sheets; the great weight of the ice ground rocks and ores into dust, which became clays, afterwards washed and refined by the lakes and streams from the melting glaciers. From these clays Nemadji Pottery is made
The Indians used this clay left by the ice sheet to make cooking pots and vases, and in the ancient warrior's grave are found fragments of his favorite cooking pot. Nemadji Art Pottery is made largely from designs of this ancient Indian pottery and many of their traditional shapes are preserved in our designs.
The coloring of Nemadji Art Pottery is accomplished in a manner that allows no two pieces to be exactly alike. The pottery is burned in a kiln and glazed on the inside. The warm rich colors of this pottery recall the colorful costumes of the redman, who, though long since gone to the happy hunting ground, still haunts in spirit the plains, streams, woods, and lakes of this our Empire.