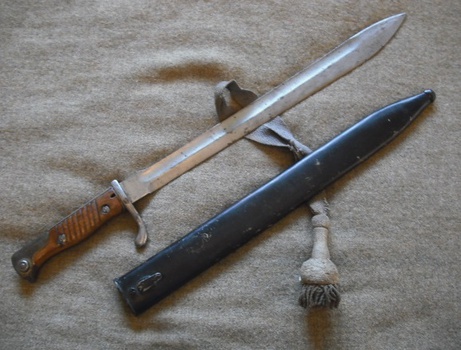 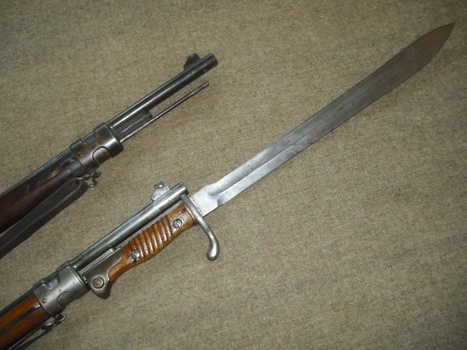 This style bayonet made up the majority of bayonets issued in WWI, and was commonly called “the butcher blade” – probably due as much to allied propaganda as its appearance. The manufacture of these bayonets began in 1905 and continued well into WWI.

As with the last bayonet, this one is also designated as a 1898/05 "n/A"; this time the “neu Art” designation indicates the addition of a metal flash guard to the back of the handle, the edge of it barely visible in the photos I’ve taken. As with the previous bayonet, there is no muzzle ring. The 1 ¾” track at the front of the nose cap on the rifle slips into a channel on the back of the bayonet and keeps it stable. As you can see in the last photo, the cleaning/stacking rod also disappears into the bayonet handle.

This is also a “Sagerucken Abgechliffen” or sawback removed. Pioneer troops were issued a version of the 98/05 bayonet that had saw teeth on the upper side of the blade. It was a purely utilitarian move, but the allies made a big deal out of the ghastly wounds created by a saw tooth bayonet, which pointed to the innate barbarity of “the Hun.” (Conveniently ignored was that the British themselves had used saw toothed bayonets in the past.) The propaganda was so successful that the Germans recalled the sawbacks, ground off the offending teeth, and reissued them. Note how the top of my bayonet has been ground down.

My bayonet is marked “Möve-Werke Walter & Co. Mühausen in Thr.” Roughly translated as Seagull-Works, the company is better known for the Gull bicycle. Mühausen is a town in the state of Thuringia, Germany. Early scabbards were made of leather. The blued steel scabbard that I have was produced beginning in 1915.

I’ve described the bayonet knot shown here in my last post. I’m just including it again because it could have gone with the 98/05, and because esthetically I like the composition.