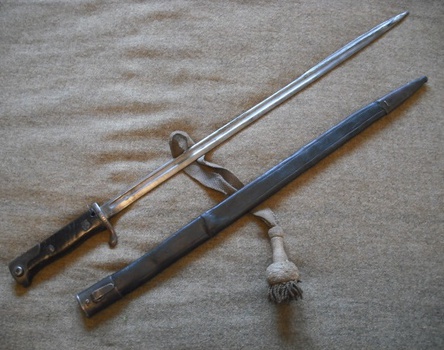 This is the first style bayonet for the Gew 98 rifle I just posted. Of interest is the “quill back” design of the blade, where the thick upper spine of the blade descends to midway in the blade by the time it reaches the tip. The length and strength of design were important issues to the Germans, who were looking for a bayonet that could counter the epee-style bayonet of the French Lebel rifle.

My particular bayonet is in a sub-type called the 1898 n/A (neu Art), which was a 1902 change when the wood grips went from a fragile one piece design to two pieces of wood on either side of a steel body. This bayonet is marked “SIMSON & CO, SUHL” and no other markings except a serial number.

The scabbard is leather with steel mounts that originally were left bright. It’s hard to find leather scabbards for these that still allow you to push the bayonet all the way in, because most have shrunk a bit over the years. I picked this up as a replacement for the shrunken scabbard that came with this bayonet. This scabbard is marked “1.G.G.1.220” for the 1st Garde-Grenadier Regiment, 1st company, weapon number 220.

The other item shown is a bayonet knot or “troddel.” These troddels descend from the saber knot, which was used to keep a sword from falling out of the user’s grasp. When used with a bayonet, troddels lost their original function and were used to designate both rank and unit. In practice, the troddel would be connected to the bayonet frog – the leather item that connected the scabbard to the belt. The various forms and colors of troddels are extensive, and a study all to themselves (I’ll bet Blue Max has a better handle on these). I believe a troddel of this type would be worn by lower enlisted men, and the all-white (now grey) color would designate the 1st battalion, 1st Company.