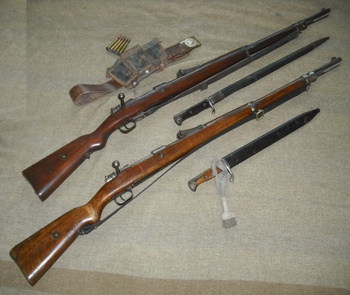 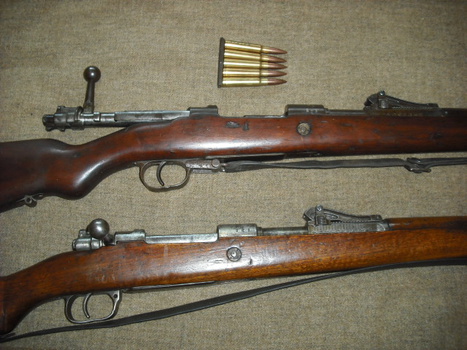 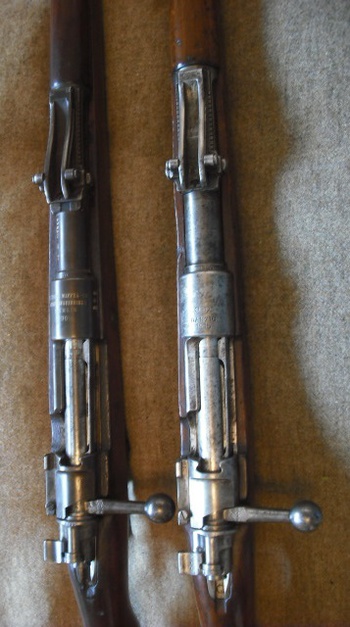 Here are my two German model 1898 rifles, one WWI production and one pre-war production. I try not to over-use the word “iconic” but this is another time it fits. Although primarily known as the German Empire’s main battle rifle during WWI, it is also one of the most copied firearms designs and arguably designer Paul Mauser’s crowning achievement. It has a solid reputation as a reliable, smooth handling and accurate rifle, although it’s length made it awkward in trench warfare, and its 400 meter minimum sight setting created problems shooting at an enemy less than 100 meters away. Its successor, the famous 98K (K=Kurz, meaning “short”) addressed those problems, replacing the Gew 98 in 1935.

My pre-war Gew 98 is marked on the receiver “DEUTSCHE WAFFEN UND MUNITIONSFABRIKEN BERLIN” (German Arms and Munitions Manufactory, Berlin) and the date of manufacture, 1902 – makes it a relatively early example. It was originally made for the round nosed 8mm 1888 ammunition used in the Gew 88 Commission rifle, but has been modified to accept the improved 8mm Spitzer ammunition that came out in 1905. The sling, which came with the rifle, is in “parade” position, meaning it’s attached in front of the trigger guard and clipped to a hook on the nose cap. It can be unclipped and reattached to the stock for slinging arms. I believe this particular sling is post-war and possibly third country manufacture, but it’s configured for the Gew 98.

My wartime Gew 98 receiver bears the crown of the Imperial Arsenal at Danzig, and the date of manufacture, 1915. The most obvious difference is that the metal did not undergo a bluing process, but was left “in the white” to simplify manufacture. On close examination I can find tool marks that do not appear on my pre-war example, evidence of less time in the finishing shop. This rifle also bears the “S” for Spitzer ammunition, but would have been originally manufactured for it. In spite of the experience of the first months of the war, it still retains the humped rear sight that goes from 400 to 2000 meters –which conformed to military thought before the war. The sling, which also came with the rifle, attaches to a standard sling swivel in the stock, which may be a post-war modification. Although a steel clip has been added to hook the sling to the nose cap, I believe this particular sling is third country. The shape of the very un-German brass buckle makes me suspect this is a Finnish accessory, as they acquired many of these post-war.

Ammo: German military Ball ammo of the time had a .323” diameter, 198 grain boat tail spire point bullet traveling at 2476 feet per second. I’ve tried a number of loads with using 200 grain Sierra HPBT match bullets, and have shot 3” groups with the 1902 rifle, hitting the bull’s eye at 100 yards on a machine rest by aiming at the top of the berm directly below the bulls eye. I get about a 4 ½” group out of my 1915 rifle.