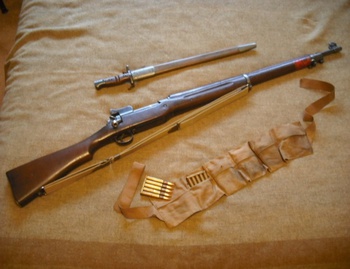 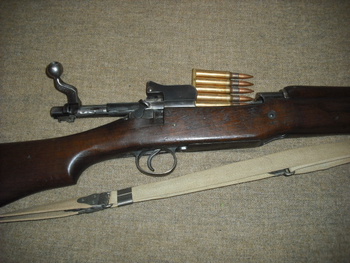 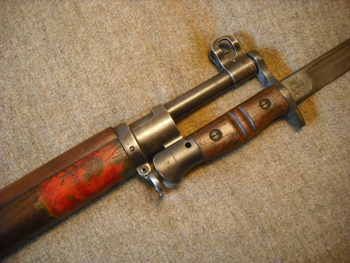 In 1910 the British began developing a replacement for the Short Magazine Lee Enfield (SMLE) rifle. When WWI broke out, the War Office decided to continue production of the SMLE in Britain, and contracted with Winchester and Remington in the US to manufacture the new rifle, the Pattern 14, in .303 British caliber. The contract was nearing completion when the US entered the war in 1917, and the US decided that it would be more efficient to contract for rifles the manufacturer was already tooled up for. With a few minor changes, the P-14’s twin brother, the US Model 1917 was born in .30-06 caliber.

As it would turn out, the P-14 would never replace the SMLE as the British main battle rifle. The M1917 was never intended to replace the ’03 Springfield, although due to manufacturing issues with the ‘03, more doughboys would carry the M1917 into battle during WWI than the Springfield. Both P-14 and M1917 remained alternate issue in their respective countries.

In 1941, the US shipped over 100,000 M1917s to Britain for service with their home guard. This created an interesting situation in that the British now had two outwardly identical rifles in different calibers. The remedy was to paint a red band around the stock of the M1917s. If you look closely, you’ll see that the band is also stenciled “30-06.” It appears that the top wood on my rifle was replaced some time afterward.

The receiver of my M1917 is marked “EDDYSTONE” indicating manufacture at Remington’s Eddystone Pennsylvania plant. Inside the stock compartment is an identical cleaning kit to the one I’ve shown with my 1903 Springfield last week. The sling is the Model 1917 web “Kerr Sling” made by the Kerr Adjustable Strap Company as a WWI alternative to the standard issue 1907 leather slings. Also pictured is a WWI period disposable bandoleer that would have been packed in the ammo containers.