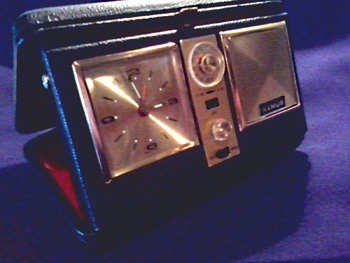 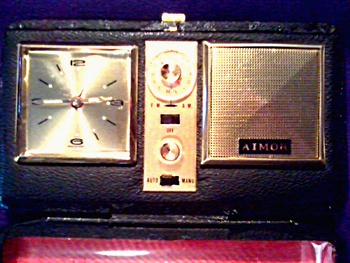 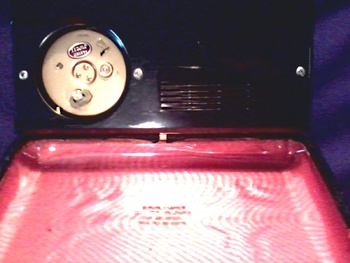 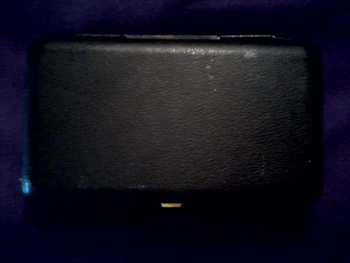 This was sitting in the jewelry case at Salvation army. Just loved the look and design and it was only six bucks ! (with my personal discount). It's made by an electronics company in Tokyo Japan called "Aimor". There isn't much about them other than it was founded in 1962. This little travel alarm clock radio combo is marked #103 and was made in 1965. The radio runs on a nine volt battery while the clock is a wind up mechanism with a little bell alarm. The clock works fine and the radio powers on with just "hiss" it doesn't pick up any stations in either band. Maybe outside but not inside. I haven't tried it outside yet. There is also an ear phone plug on the side. A few nicks in the exterior of the case which is metal under the leather. The gold label stamped on the inside reads: "Genuine Leather Case Made in Japan Brit. Pat. 991265 Reg. Des. No. 911085 . I don't know about the leather part. Seems like very thin vinyl to me. The interior has a salmon colored moire fabric which is protected by a clear plastic liner. Very 60's chic ! -Mike-