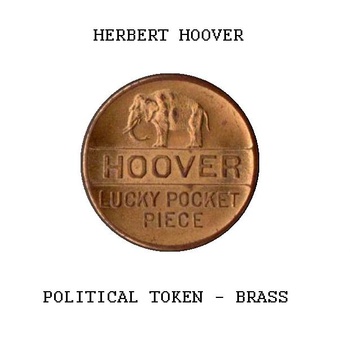 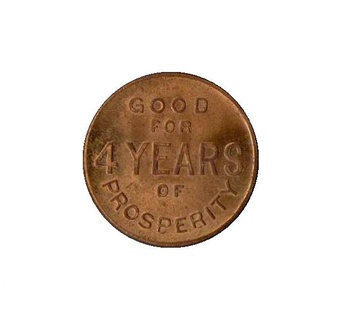 This is a Herbert Hoover Presidential Campaign Token from 1928.
Obverse: Republican Elephant emblem / Hoover / Lucky Pocket Piece
Reverse: "Good for 4 Years of Prosperity"
- Brass / 26mm diameter / uncirculated condition (some blemishes)
** Herbert Hoover (1874-1964) was the 31st President of the United States serving from 1929–1933. - The Wall Street Crash of 1929 struck less than eight months after he took office followed by the Great Depression which lasted throughout his term in office. Hoover's defeat in the 1932 re-election was caused primarily by his failure to end the downward economic spiral although his support for enforcement of prohibition was also a significant factor. Hoover is generally ranked lower than average among U.S. Presidents.