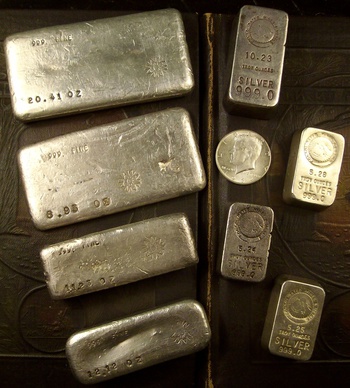 Just a few older silver bars from "old west" refiners. A&W stands for Alexander Westerfall (bars on the left. largest is at top 20.41 ounces 999 fine) and the smaller bars on the right (top bar weighs 10.23 ounces) are from a very rare refiner named Consolidated Mines & Metals. I have an extensive "old pour" collection of 300 or so, with bars that have no even weight such as 5 ounces or 10 ounces. All of the weights have a decimal point in the final weight tally. Such as 20.41 & 10.23 oz. This is just one of my many addictions in the precious metal realm. I listed about 80 different bars on eBay from some that did not mean that much to me and as soon as I think, the 4th one sold, I said to myself, I don't want to get rid of these. Silver is not going down. So... I went and de-listed all but about a dozen and priced them in the "stratosphere" and damn if they aren't still selling.