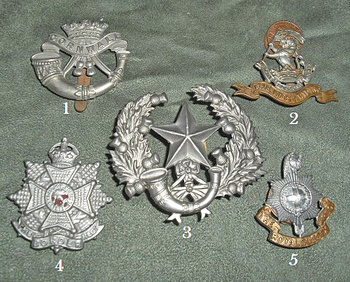 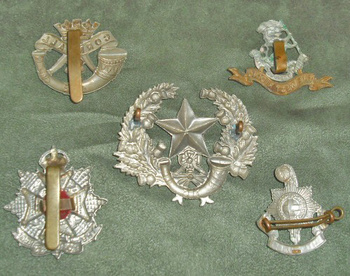 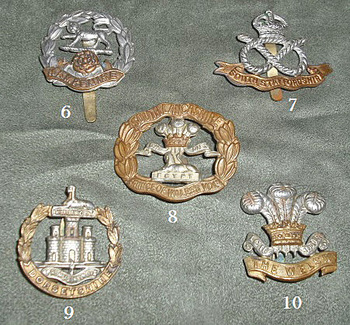 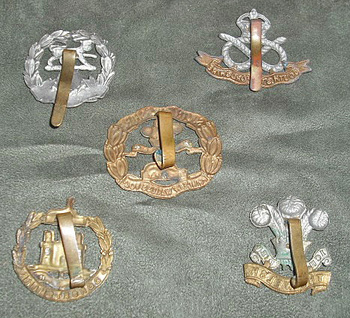 The back of the badge tells much. The brass shank or “slider” was the most common attaching method. During WWI, the sliders tended to be long, and were sometimes cut shorter to fit the cap better. Frequently there will be a distinct crimp mark at the bend of WWI sliders. Brazing holes are sometimes visible from the back of the badge, where one metal was brazed to the other. These are also considered an indicator of WWI vintage – but not all WWI badges have them and so the absence of them does not prove more recent manufacture.

1. The Duke of Cornwall’s Light Infantry bears the bugle associated with Light infantry/Rifle regiments and the Duke’s crown (cornet).

3. The Cameronians (Scottish Rifles) was raised from Covenanters and take their name from Richard Cameron, the religious reformer. The star is from the arms of the Earl of Angus and the horn is associated with rifle regiments.

5. The Royal Sussex Regiment bears the star of the order of the garter and a plume commemorating its defeat of a French Regiment while under Wolfe’s command at Quebec in 1759.

6. The Hampshire Regiment has the royal tiger for its actions in India from 1805-1826 along with the Hampshire Rose. This badge is sometimes called the “Cat and Cabbage”.

7. The South Staffordshire Regiment bears the knot from of the arms of de Stafford. Mine has a “hairpin” slider, meaning the shank is bent in an upside-down J shape to provide reinforcement to the badge.

8. The Prince of Wale’s Volunteers (South Lancashire Regiment) bears the plume of the Prince of Wales and the sphinx for actions in Egypt. Another from that second trophy belt with the bent sliders.

9. The Dorsetshire Regiment has the sphinx from actions in Egypt and the castle and key of Gibraltar for service there from 1779-83. Same trophy belt as above.

10. The Welsh Regiment bears the plume and cornet of the Prince of Wales. Again mine has the pre-1920 spelling of Welsh rather than Welch. Same belt.